The effects of banking regulation and supervision on the banking system overall stability: the case of Greece

Since 2014, under the SSM Framework Regulation, the ECB has direct supervisory jurisdiction in relation to the prudential and governance requirements over the four banks of Greece that are systemically important to the EU financial stability. This action has an impact the absolute transformation of the supervisory banking system in Greece since the ECB through its Supervisory Board and Governing Council is exclusively competent for the supervision of the most crucial part of the Greek banking sector.
by  Dr Antonis Zairis* and  George Zairis*
A Bank is a risky business with the possibility of default. Consequently, it is not absurd to state that banking is one of the most regulated industries in the world (Chortareas, Girardone and Ventouri, 2012).
It is an undeniable fact that, with the advent of financial crisis, banking regulation and supervision play an even more important and leading role on the stability of the banking system than before. The aim of this essay is to focus on two major points:
Firstly, to analyse the impact of banking regulation and supervision on the banking system’s overall stability and secondly to try to give an answer to the following question: ‘’will a more firmly supervised and regulated system be more appropriate to secure the robustness of the global banking system?” And secondly, this essay will focus on the controversial aspect of banking regulation and supervision while in parallel we will discuss the impact of banking regulation and supervision in the Euro Area and Greece.
To begin with, it is essential to give a clear definition of what regulation and supervision mean. The term regulation refers to the setting of the particular principles that firms or banks need to obey to. These might be a set of laws, rules or legislation to be stipulated by the appropriate regulatory agency. On the other hand, supervision is a term used to allude to the general oversight of the behavior of firms and banks (Casu, Girardone and Molineux, 2007).This means that the main difference between banking regulation and supervision is that the first include the law-on-the-books while the second include the actual implementation of these laws.
Measuring banking soundness
As the main purpose of the essay is to discuss the effects of banking regulation, it is very important to have a specific measurement of the bank’s soundness and robustness. This measure is the Z-score. The basic principle of the z-score measure is “to relate a bank’s capital level to variability in its returns, so that one can know how much variability in returns can be absorbed by capital without the bank becoming insolvent.
The variability in returns is typically measured by the standard deviation of Return on Assets (ROA) as the denominator of z-score, while the numerator of the ratio is typically defined as the ratio of equity capital to assets plus ROA"(Li, Tripe, and Malone,2017). So, z-score can be calculated by the following equation:
(Average Return on assets(ROA) + equity/assets)/( standard deviation of the return of assets(ROA) )
Z-score catches the probability of default of a country’s banking system and it can be explained as the number of standard deviations below the mean by which returns would have to fall to wipe out bank equity (Demirguc-Kunt, Detragiache and Tressel, 2008).
From the measurements with z-score we can conclude that a low-risk bank or a country's low-risk banking sector will have a high value of z-score, demonstrating that an extensive number of the standard deviation of a bank's asset return need to drop to become insolvent. On the other hand, a high-risk bank or a country's high-risk banking sector will have a low value of z-score (Li, Tripe, and Malone, 2017).
When we use z-scores to measure bank soundness, we should take into consideration that this kind of measurement is an accounting-based measure. This means that we may face problems when we try to measure the soundness in low income and undeveloped countries where accounting standards have a tendency to be unavailable. Moreover, in these countries laws and regulations might not be enforced as they should.
Furthermore, z-score may fail to find an appropriate correlation due to the sample of banks which is examined. For instance, we will fail to have a clear result if in the same sample we include big institutions or investment banks with small banks.
In this essay, three different z-scores will be examined and compared. The first one will be the world z-score which contains 220 countries from all over the world in the years 2005-2015, a period that includes the financial crisis in. The second one contains the countries of the euro area and the third one, the case of Greece, a country which is one of the most recent examples of strict banking regulation if the introduction of capital controls in 2015 is taken into consideration.
The table and the values used are as follows: 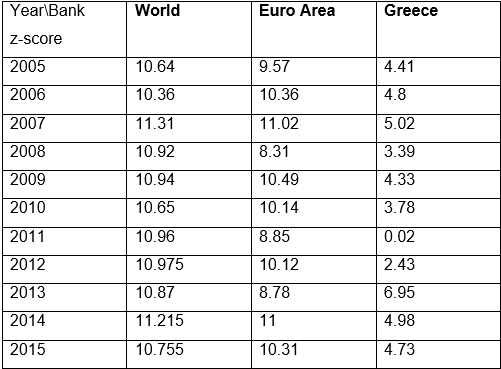