Global imperative ... the transition to a greener and more equal economy is within our grasp.

The Global Competitiveness Report 2019 is a much-needed economic compass, building on 40 years of experience of benchmarking the drivers of long-term competitiveness and integrating the latest learnings about the factors of future productivity

by Klaus Schwab and Saadia Zahidi*

The Global Competitiveness Report 2019 is a much-needed economic compass, building on 40 years of experience of benchmarking the drivers of long-term competitiveness and integrating the latest learnings about the factors of future productivity.

The Global Competitiveness Index 4.0 is organized into 12 pillars: institutions; infrastructure; ICT adoption; macroeconomic stability; health; skills; product market; labour market; financial system; market size; business dynamism; and innovation capability. The index has a scoring system ranging from 0 to 100, with the frontier (100) corresponding to the goal post for each indicator.

The Index results and country scorecard are designed to help countries assess their performance against their own history as well as compare to others in their region or income group. However, the report also tells us more about developments in the global economy that policymakers, business and individuals must understand and proactively manage. 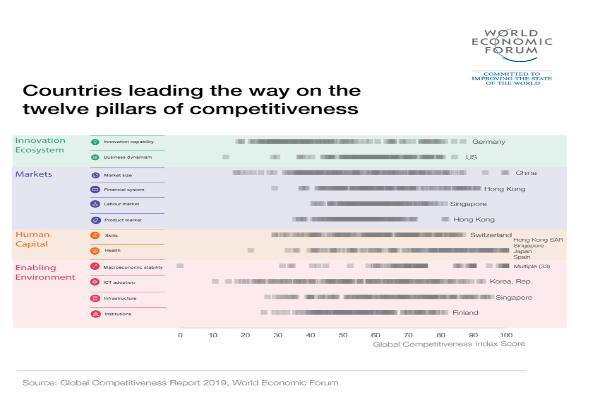 What are the top five trends in the global economy as revealed by the Global Competitiveness Index 4.0 in 2019 and what are the implications for policymakers?

1. The last 10 years saw global leaders take rapid action to mitigate the worst of the financial crisis, but this alone has not been enough to boost productivity growth.

Since the Great Recession, policymakers have kept the global economy afloat primarily through ultra-loose and unconventional monetary policy. But despite the massive injection of liquidity – the world’s four major central banks alone injected $10 trillion between 2008 and 2017 – productivity growth has continued to stagnate over the past decade.

An over-reliance on monetary policy may have contributed to reducing productivity growth by encouraging capital mis-allocation, with banks becoming less interested in lending to businesses, favouring firms that are not credit-constrained, and prioritizing fee-generating and trading activities instead. There is no compensability between the 12 levers of competitiveness– a sound financial system cannot compensate for poor physical infrastructure, just as ICT adoption cannot compensate for the lack of an entrepreneurial and innovation ecosystem. Countries must pursue all 12 avenues but create their own sequencing strategy to balance and focus efforts, taking advantage of cheaper capital and technology. As the adage goes, “fix the roof while the sun is shining”, and policymakers have a narrowing window before a predicted slowdown. 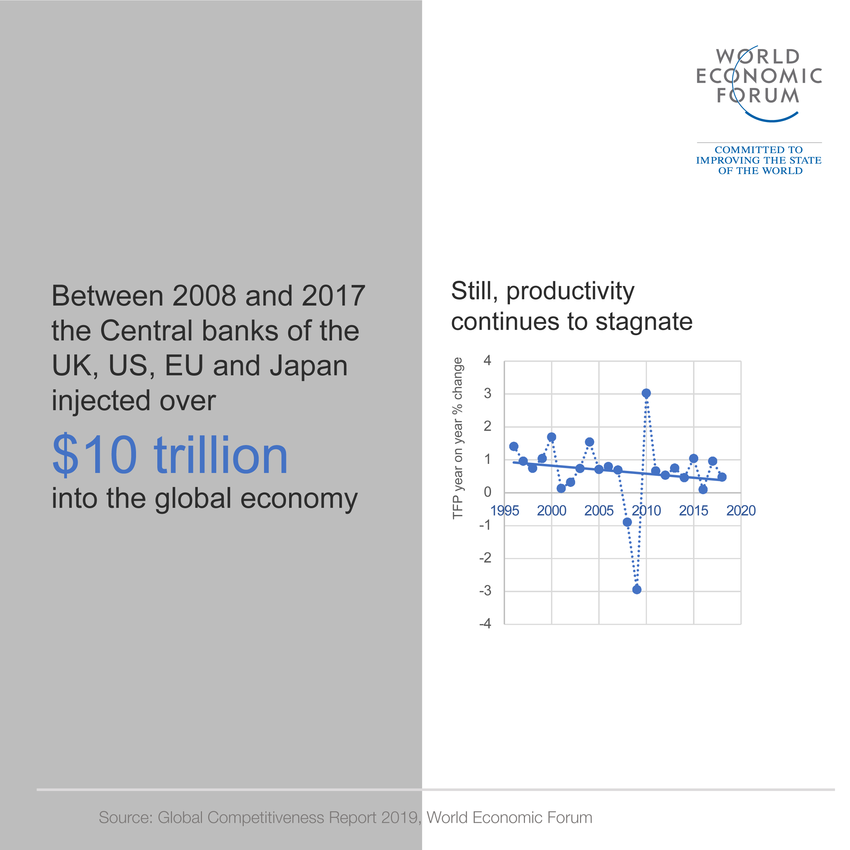 2. With monetary policy running out of steam, policymakers must revisit and expand their toolkit to include a range of fiscal policy tools, reforms and public incentives.

Exclusive – and perhaps excessive – reliance on monetary policy has also meant that fiscal policy has been largely underutilized, as reflected in a steady decline in public investments globally. Despite the very low borrowing costs, the public sector has not stepped up investments (government expenditure as a share of total gross fixed capital formation in the US was 18.3% in 1995, and 15.7% in 2016; in France it was 21% in 1995 and 15.4% in 2016) – partly due, in some advanced economies, to concerns about the sustainability of public debt (public debt to GDP ratios have reached 237% in Japan, 121% in Portugal and 132% in Italy).

If indeed “hysteresis” has permanently lowered the growth path, then investment-led stimulus could be an appropriate action to re-start growth in stagnating advanced economies, especially fiscal policy that prioritizes investments in infrastructure, human capital, R&D and green procurement, complemented by structural reforms that make it easier to innovate and enable responsible and inclusive businesses to thrive. 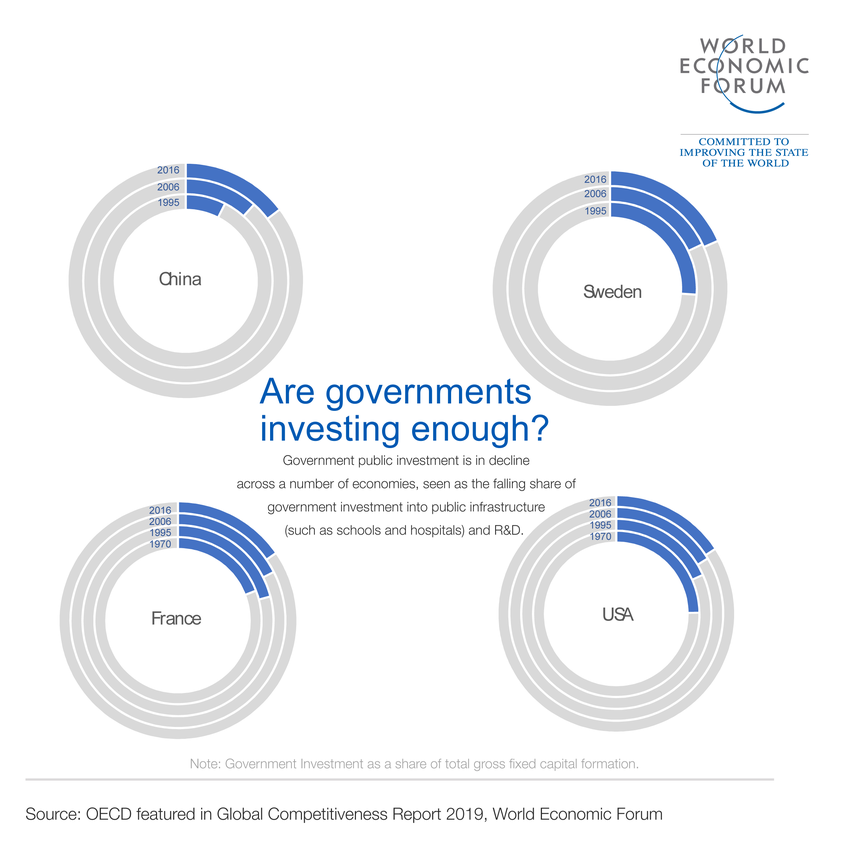 3. ICT adoption and promoting technology integration is important but policymakers must in parallel invest in developing skills if they want to provide opportunity for all in the era of the Fourth Industrial Revolution.

While many advanced and emerging markets are embracing the new technologies of the Fourth Industrial Revolution, finding a balance between technology integration, human capital investments and the innovation ecosystem will be critical to enhancing productivity in the next decade. With the right skills and training, workers can become the agents embracing, driving and realizing the potential of technology, rather than being displaced by it. Investing in people can no longer be an afterthought – it is a fundamental building block of growth and resilience in the Fourth Industrial Revolution. Additionally, while scientific publications, patent applications, R&D expenditure and research institutions are all well-established aspects of developing innovation capability, they are not enough.

For good ideas to move through to commercialization, a number of “softer” factors are equally important, such as the ability of companies to embrace disruptive ideas (on this aspect Germany is 7th with 63.1 points while Italy is 98th with 39.6 points), the attitude toward entrepreneurial risk (United States is 2nd with 75.9 while France is 55th with 52.9 points), diversity of the workforce (Canada is 5th with 76.4 points; while Japan is 106th with 50.7 points) and flat hierarchical structures in companies (Denmark is 1st with 82.4 points and South Korea is 85th with 53.0). 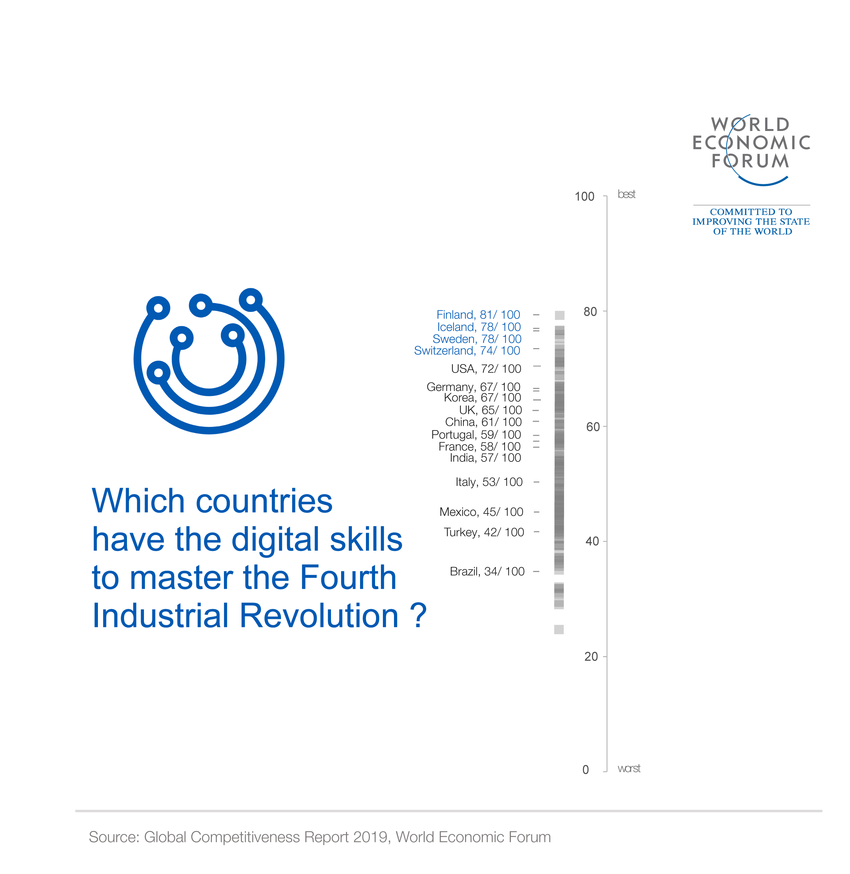 4. Competitiveness is still key for improving living standards, but policymakers must look at the speed, direction and quality of growth together at the dawn of the 2020s.

Sustained economic growth remains a critical pathway out of poverty and a core driver of human development and living standards. Yet, it is not enough on its own as we look towards solutions for the two greatest challenges of the next decade: building shared prosperity and managing the transition to a green economy. Data in the report shows a marked rise in market concentration in advanced and emerging economies (business leaders assessment of market competition over the past 10 years decreased by 15% in the US and 12% in Germany) as well as growing income inequality (for example, the share of income of top decile over the past 10 years grew from 43% to 47% in the US, from 36% to 41% in China and from 32% to 35% in Germany).

When it comes to climate, of the 10 ecological factors that can destabilize the planet’s ecosystem, three have already exceeded their “limit”. The traditional prevailing view has been that equality or sustainability must come at the price of growth. We find the opposite to be true – a lack of shared prosperity and environmental sustainability corrodes productivity growth. Moreover, there is a clear moral case for focusing not just the speed of growth but also its direction (environmentally sustainable) and quality (generating shared prosperity). 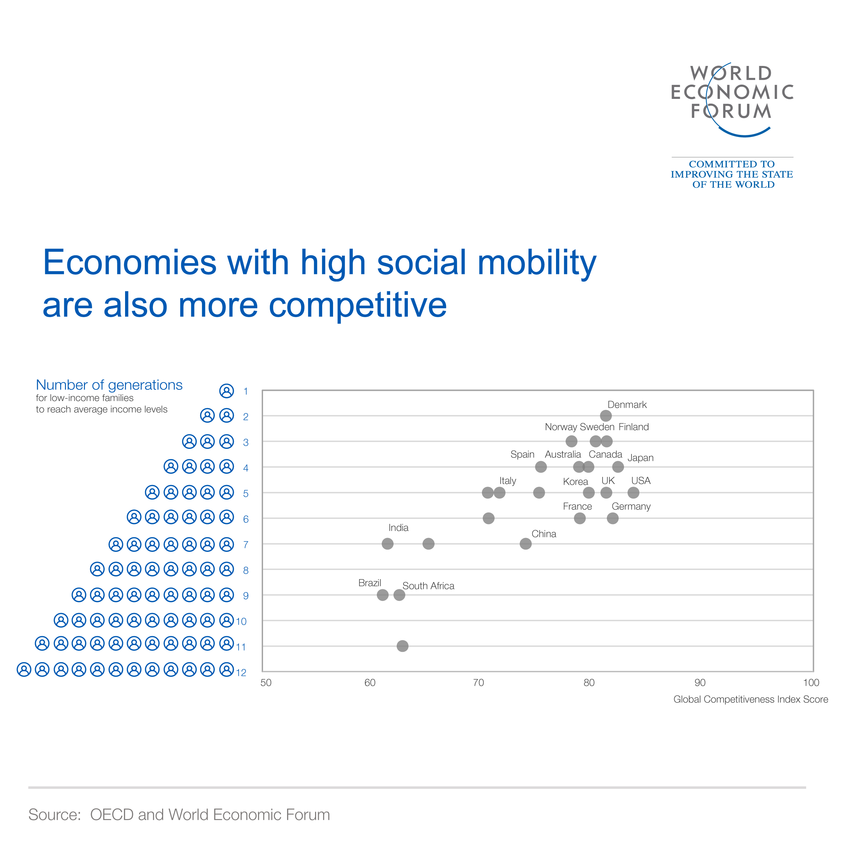 5. It is possible for an economy to be growing, inclusive and environmentally sustainable – but more visionary leadership is needed to place all economies on such a win-win-win trajectory.
The perceived trade-offs between economic, social and environmental factors may emerge from a short-term and narrow view of growth but can be mitigated by adopting a holistic and longer-term approach to growth. Some economies are already succeeding in doing so, for example, Sweden, Denmark and Finland have not only become among the world’s most technologically advanced, innovative and dynamic economies in the world, they are also providing better living conditions and better social protection, are more cohesive, and more sustainable than their peers at a similar level of competitiveness.
However, most countries have very different results on social and environmental factors for the same level of current competitiveness. For instance, on the environmental front, while Sweden and the United States’ both score above 80/100 on competitiveness, Sweden increased its reliance on renewable energy by 13% over the past 15 years while the US by only 3%; similarly, on the social policy front, although Denmark and the United Kingdom are at comparable levels of competitiveness, it takes two generations for a low-income individual to achieve the mean income in Denmark, and five years in the UK. The low scores of most economies on the “future orientation of the government” measure indicates that economic policymakers are falling short of the expectations of their populations when it comes to building a new economy and society. 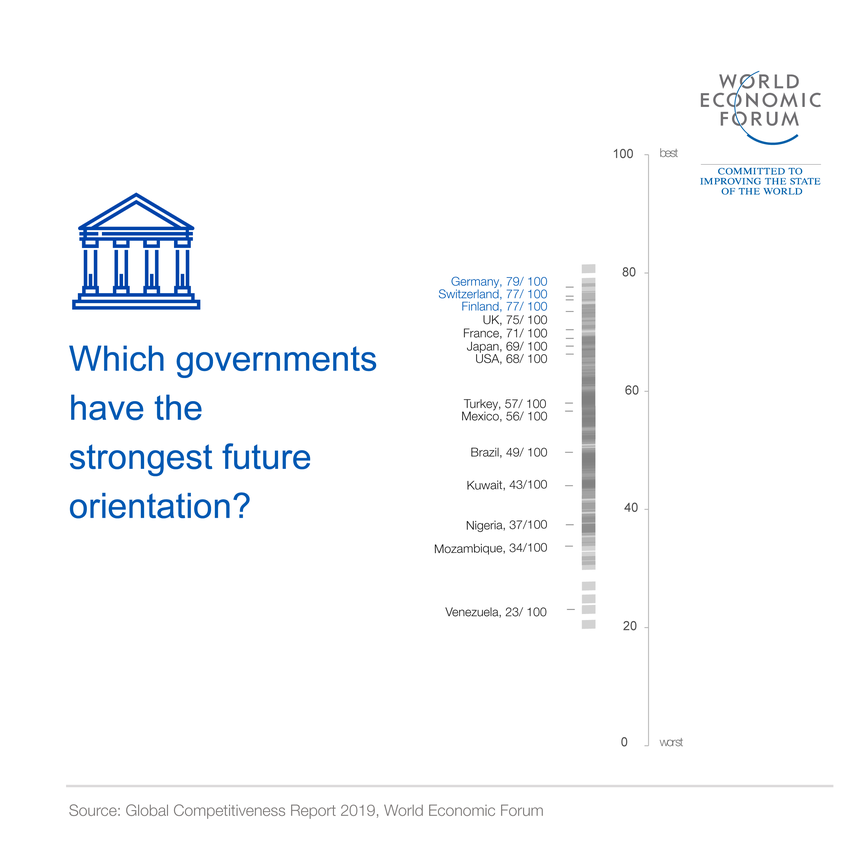