The pandemic’s impact on young people has been “systematic, deep and disproportionate”, according to new research by the International Labour Organization (ILO), with young women, younger adults and youth in lower-income countries worst affected

The pandemic’s impact on young people has been “systematic, deep and disproportionate”, according to new research by the International Labour Organization (ILO), with young women, younger adults and youth in lower-income countries worst affected.

The Global Survey on Youth & COVID-19 interviewed 12,000 respondents from 112 countries, aged between 18 and 29. Conducted during April and May 2020, the findings are the closest we have to a snapshot of how school closures, lockdown restrictions and the economic slowdown have impacted young people’s lives, learning and livelihoods.

But despite suffering disruption and lost opportunities, there is optimism for the years ahead.

Lockdown closures of schools, universities and training organizations affected 73% of survey respondents, with almost one in eight seeing their education and training provision come to a complete halt since the start of the pandemic.

And despite efforts to continue educational provision through distance learning or by moving in-person classes online, 65% of young people reported they had learnt less during the crisis. 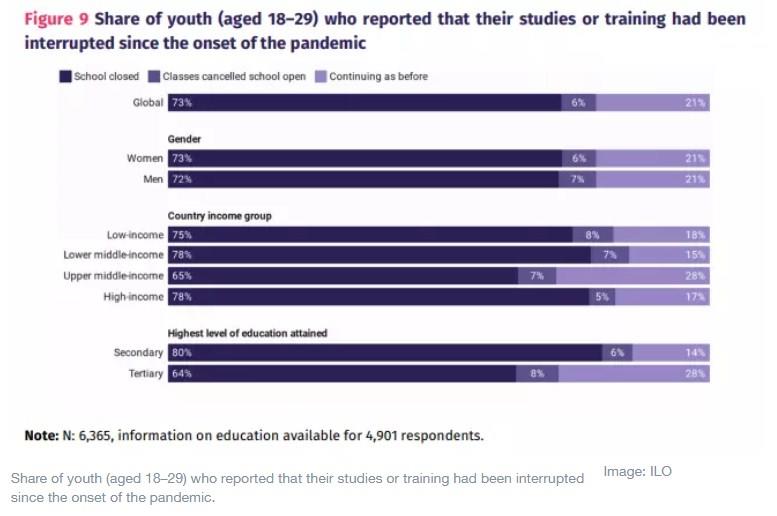 The abrupt transition to online learning was more effective in parts of the world with greater internet access, availability of computer equipment and digital teaching skills and materials. Many students in poorer countries, with limited access to the internet and resources, experienced greater disruption to their education.

Globally, youth unemployment was already an issue before the pandemic hit, with 15 to 24 year-olds three times more likely to be without work than the over-25s. But the COVID-19 crisis has made the situation worse.

One in six young people surveyed have stopped working since the pandemic, the survey shows, including those that have lost their jobs and those still employed but working zero hours. Almost a quarter of 18 to 24 year-olds who were working before the pandemic have stopped, compared to just 13% of the 25-to-29 age group. Sectors like clerical support, service industries and sales were hard hit by business closures and job losses, with a high proportion of the temporary, seasonal and low-paid jobs that typically attract younger workers.

More than half of workers reporting a partial reduction in working hours saw their incomes fall, while almost a quarter of respondents with no change in their working hours also received less pay.

So, what are the implications for the future? 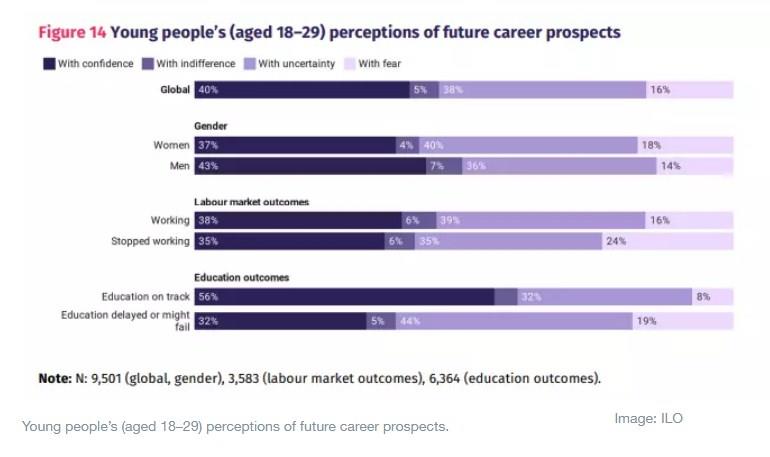 Two-fifths of those surveyed around the world viewed their future career prospects in an optimistic light, with more men than women reporting being confident. Slightly fewer people looked ahead with uncertainty, while 16% expressed fear for their career prospects.

Amid signs of hope and resilience, almost half of the young people surveyed reported pursuing new training or learning opportunities since the pandemic began.

Alongside the wave of interest in developing new knowledge and skills, 35% of young people reported feeling optimistic about the future some of the time, with the same percentage expressing these feelings often or all the time.