"So far, 189 countries have committed to the Paris agreement, representing more than 81%, and 93% once the US rejoins, of global emissions."

A lot has happened since countries met in Paris in 2015 and agreed on an accord to combat climate change. So far, more than 189 countries ratified or otherwise joined the Paris Climate Agreement, representing more than 81% of global greenhouse gas emissions and 93% once the United States rejoins. Additionally, 19 countries — including United States, Japan, Canada, Germany and Mexico — also developed long-term plans to decarbonize their economies.

As countries implement their targets and policies and develop more detailed pathways to reduce their greenhouse gas (GHG) emissions, it’s important to fully understand the global emissions picture and how it changes over time. Our Climate Watch interactive chart explores GHG emissions by country and economic sector1, and shows how top emitters have changed in recent years: 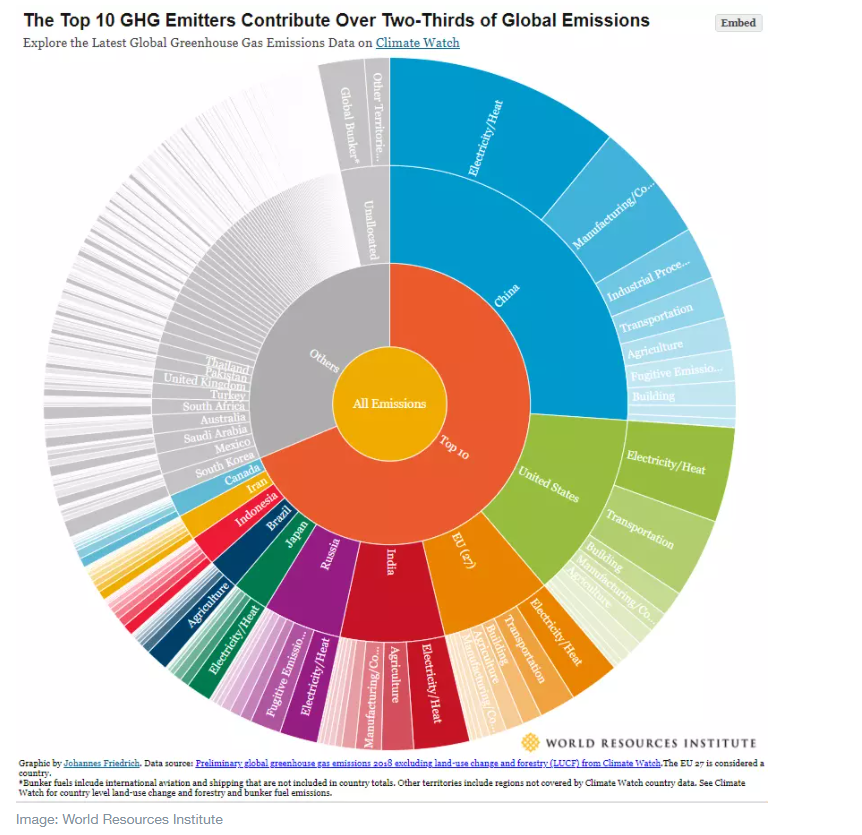 The top three greenhouse gas emitters — China, the European Union and the United States — contribute 41.5% of total global emissions, while the bottom 100 countries only account for only 3.6%. Collectively, the top 10 emitters account for over two-thirds of global GHG emissions.

2. The Energy Sector is the Biggest Greenhouse Gas Emitter, but Action in Every Sector Counts

Since reporting began in 1990, the energy sector — including electricity, transport, manufacturing, buildings, fugitive and other fossil fuels — remained the largest contributor to GHG emissions over any other sector, representing 73% of global emissions in 2017.

Energy emission have increased by 56% since 1990. However, energy emission growth has slowed down since 2013, only increasing by 3.5% over the last 5 years. While emissions from land-use change and forestry (3rd largest sector) have varied over the years, they remained on a relatively high level.

Avoiding the worst climate impacts will require reversing the upwards trend in all sectors and rapidly decreasing emissions to net zero by 2050.

3. Many Top Emitters Are Slowing Down or Reducing Emissions

While the top emitters in total increased their emissions by 47% since 1990, the United States, European Union, Russia and Japan have since peaked and Brazil seems to have stabilized their emissions. Although China, India, Indonesia, Iran and South Korea are still increasing their emission, India and Indonesia have comparatively low emissions per capita.

More recent data from the Global Carbon Project, which covers energy-related carbon dioxide emissions, shows that emission growth slowed down globally since 2013, increasing by an average of 0.7% per year, compared to an average of 1.7% since 1990. This slowing of growth happened even as the global economy grew during the same period and twenty-one countries are already proving that decoupling emissions from economic growth is possible. However, emissions are still on an upwards trend, illustrating the need for increased climate actions to see a decoupling of economic growth and carbon emissions.

To avoid the worst impacts of climate change, we need to rapidly reduce emissions to net zero by 2050. Climate data is essential to understanding the latest emissions trends and countries’ short- and long-term actions that will bend the emission curve downward.

Climate Watch, WRI’s climate data platform, offers hundreds of open datasets that visualize historical greenhouse gas emissions of all countries, regions, sectors and various types of greenhouse gasses. The platform allows users to analyze and compare the nationally-determined contributions (NDCs) and long-term Strategies (LTS) under the Paris Agreement, discover countries’ climate policies, see how countries can leverage their climate goals to achieve their sustainable development objectives and use models to map new pathways to a lower carbon, prosperous future. These tools can help illuminate what changes must be made and chart a path toward achieving net zero.

Will the Green Deal cause food shortages?

The green sustainability plans of the European Commission are increasingly criticised in the European Parliament, who fear that the Green Deal will cause food shortages in the EU

Manufacturing can be the engine of global recovery