How world’s coal-power pipeline has shrunk by three-quarters

"Unabated coal power generation must be quickly phased out in order to meet the goals of the 2015 Paris Agreement."

by Leo Roberts and Christine Shearer*

There is now a broad consensus that unabated coal power generation must be rapidly phased out if the goals of the 2015 Paris Agreement are to be met.

The Intergovernmental Panel on Climate Change (IPCC) sees coal use falling by around four-fifths this decade on a 1.5C pathway. The International Energy Agency roadmap for 1.5C says unabated coal power should end by 2030 in advanced economies and by 2040 globally.

A pivotal first step is ensuring no new coal-fired power stations are built. UN secretary general Antonio Guterres is calling for an end to their construction after this year and COP26 president designate Alok Sharma wants the summit in Glasgow to “consign coal power to history”.

In new analysis, we show that the global pipeline of new coal plant projects has already shrunk dramatically since 2015, bringing the world closer to a pathway consistent with international climate goals.

To date, 44 governments have committed to end the construction of coal plants. A further 33 countries have cancelled their project pipelines since 2015 and are in a position to make a formal “no new coal” pledge, alongside seven more with no plans to replace their coal fleets.

The remaining pre-construction pipeline is spread across a further 37 countries, 16 of which have just one project. Just six countries account for more than four-fifths of proposed coal plants, namely China, India, Vietnam, Indonesia, Turkey and Bangladesh.

Most of these six are reducing but not ending their plans, our analysis shows. If any were to commit to no new coal, it would radically reduce the global pipeline of new projects.

Back in 2015, when the world’s governments negotiated the Paris Agreement, there was a total of 1,553 gigawatts (GW) of coal capacity in the global pipeline, our analysis finds.

Globally, 1,175GW of planned projects have been cancelled since 2015. Accelerating market trends have combined with new government policies and sustained civil society opposition to coal. The world has avoided a 56% expansion of the total global coal fleet (as of June 2021), which would have been equivalent to adding a second China (1,047GW) to global coal capacity.

The cancelled capacity is 3.6 times more than the 327GW that has gone into operation over the same period, meaning plants in the pipeline have been more likely to be scrapped than built.

The Sankey chart below visually conveys the scale of cancellations since Paris (dark grey chunks) relative to what has started operating (dark blue) or entered construction (red).

Our analysis breaks the global coal landscape into three constituent regions, each manifesting different forms of the current international structural shift away from coal.

The first region is the OECD group of market economies and the EU, where very few new coal plants are planned and countries are engaged in accelerating retirements of their existing fleets.

Looking at each of these regions in turn, the 38-strong OECD group of market economies and EU28 have continued to move away from coal, with the dynamic across most of these countries now moving towards accelerated retirements.

Only five of these countries are bucking the group trend and still considering building new coal, namely Australia, Colombia, Mexico, Poland and Turkey.

Projects nominally still in the pipeline for the first four of these countries are unlikely to proceed.

Turkey accounts for nearly three-quarters of the OECD total, with a pipeline of 12GW. In spite of a major coal push since 2015, however, its pipeline has also been contracting rapidly and is now 64% smaller than it was in 2018. Some 8GW was cancelled in the first half of 2021 alone.

Fears of the impact of a potential European carbon border adjustment mechanism (CBAM) and climate-exacerbated wildfires are increasing pressure to cancel the country’s remaining pipeline and explore alternatives.

China is a constituent bloc in its own right. However, even with its continued pursuit of coal, its pipeline is now 74% smaller, including 484GW of planned capacity that has been cancelled since Paris – more than double the amount that went into operation over that period (198GW).

Turning to the third grouping of non-OECD countries excluding China, the pre-construction pipeline has collapsed by 77% since 2015, with five times as much coal power capacity having been scrapped (552GW) as commissioned (105GW).

The shift in coal dynamics means that fewer and fewer countries have new coal plants under development – and an increasing list are making this into a formal “no new coal” commitment.

The chart below shows the number of countries considering coal plants at each stage of development on the y-axis, as an alternative way illustrating the shrinking global coal pipeline.

For example, in 2015 there were 26 non-OECD countries with coal plants under construction, amounting to a total capacity of 123GW (red line, left panel). By 2021, this had fallen to just 14 countries building a total of 72GW of new coal capacity. 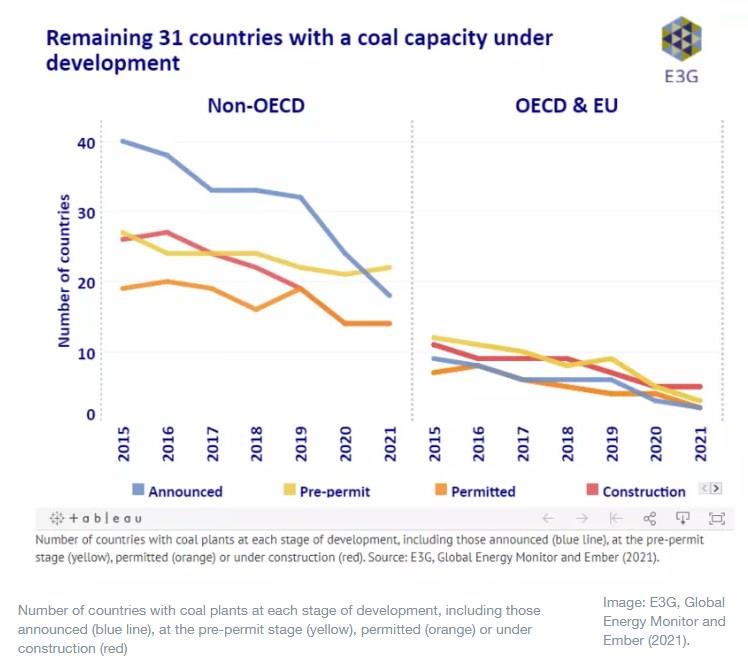 Similarly, the chart above shows that 11 countries from the OECD or EU28 were building 28GW of coal capacity in 2015 and this had fallen to five countries and 16GW by 2021 (right panel), namely Japan, Turkey, Poland, South Korea and Greece. (Notably, Greece and South Korea are now both considering converting their unfinished coal plants to gas.)

To date, our analysis finds that 44 governments have committed to not pursue any new coal plants, many through joining the Powering Past Coal Alliance.

Others have made the move independently, with Sri Lanka making an explicit “no new coal” commitment in its 2021 Paris pledge (“nationally determined contribution”) and Malaysia’s Energy Transition Plan 2021-2040 including a commitment to not build new coal.

A further 40 countries have the opportunity to formalise the facts on the ground by making their own “no new coal” commitments. Some 33 have cancelled their remaining project pipelines, while 7 have no plans for new coal. This group includes 32 non-OECD countries that have pivoted away from coal, showing the global expansion of this trend.

The remaining pipeline of pre-construction coal power projects still under development amounts to 297GW of capacity spread across a total of 37 countries. Yet in reality, this pipeline is highly concentrated in just six countries.

As of July 2021, these countries account for more than four-fifths (82%) of the remaining development pipeline, namely China, India, Vietnam, Indonesia, Turkey and Bangladesh. This is shown in the donut chart below (shades of red). 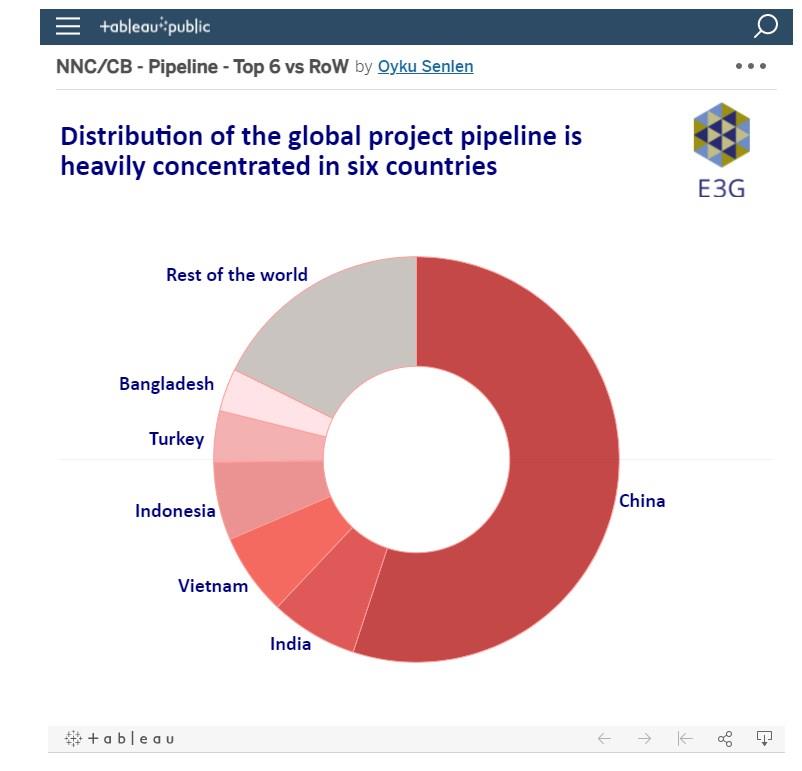 The situation in China and Turkey is described briefly above. Taking the others in turn, India is currently constructing 34GW of new coal capacity, more than the next seven countries combined, while its pre-construction pipeline of 21GW is the second largest in the world. This is on top of India’s considerable existing operating fleet of 233GW (11% of the global total).

Yet since 2015, India has seen over 326GW of projects cancelled, a 92% decrease in the pipeline. This includes more than 250GW of capacity that had previously been shelved. This means that almost 7GW have been scrapped for every 1GW that has gone into operation.