After having had a taste of remote working through the pandemic, employees are now yearning for even greater flexibility when it comes to their working hours

After having had a taste of remote working through the pandemic, employees are now yearning for even greater flexibility when it comes to their working hours. According to a report by Adobe, 51 percent of enterprise employees would like to have complete flexibility when it comes to their schedule, in contrast to only 16 percent of respondents who said their ideal work week would have no flexibility at all, but rather “start and end work according to a set work schedule.”

The 2021 report, titled ‘The Future of Time’, states that this desire for a flexi approach was found in all seven of the surveyed countries, including the UK, U.S., Australia, New Zealand, France, Germany, and Japan. Of these, Germans were the keenest group to embrace flexible working hours, with 56 percent of respondents supporting it. They were also the group with the highest percentage of people currently experiencing a flexible lifestyle, at 39 percent. Japan currently has the lowest share of people working flexible hours out of the seven countries surveyed, at only 12 percent, but it too had nearly half (48 percent) of respondents stating they’d like to work in a less restrictive manner in the future if possible.

Younger generations in particular appear to care about levels of self-autonomy over their work schedule, with 73 percent of Millenials saying that they would switch jobs to another with greater flexibility if their salary and job description stayed the same, according to the report. At the same time, as Wrike writes, an increase in flexible work schedules may also help gender equality, as parents can share the burden of child care. This trend appears to be gaining steam, as we’ve seen more companies taking up the idea, and even governments, as Ireland now gets set to implement the right to request flexible work arrangements, according to RTE. 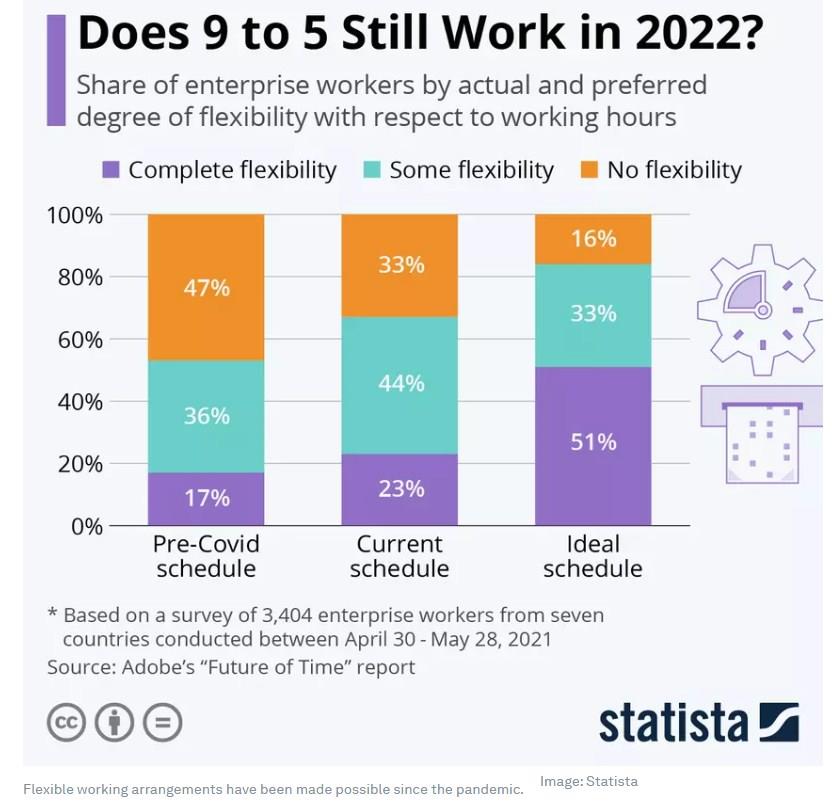 Times have changed since Henry Ford introduced 8 hour shifts for factory workers, back in the early 1900s. As Forbes writes, living in a service economy is not the same as a manufacturing economy; we now have the technology to connect us with colleagues in different time zones instantaneously, and for many people, at least in the global north, social patterns have completely changed. As Adobe writes, “Employers need to address these challenges, or risk losing top talent.”