Business leadership during crisis: Here’s how to succeed

In an increasingly uncertain world, leaders have to learn how to navigate simultaneous crises

Leaders inspire and bring others with them.

In today’s world, one thing is certain: uncertainty, a status that has emerged as the defining characteristic of our age.

For decades, much of the world enjoyed relatively steady economic and social gains. As a global collective, we have experienced better standards of living, improved transport and communication, improved civil liberties for more of the world than before, and improved life expectancies and public health. New technologies and a movement toward freer trade brought a record number of people into the global economy, creating expanded and robust economic flows.

But today, much of this economic logic is being upended. First, the pandemic and then the invasion of Ukraine presented the world with the most significant set of challenges since World War II. And now, in part on the back of these two crises but also driven by longer-term trends, the world faces strong headwinds, which will likely slow growth and create significant challenges for leaders around the globe.

Bold new approaches to productivity, supply, consumption and leisure are required – and are being adopted at surprising speed as an array of other disruptive forces accelerate and become increasingly apparent.

In this year’s AlixPartners Disruption Index, we identified four major trends that we believe will be most transformative in the years ahead.

1. Demographic decline – An ageing and decreasing population will impact all leading economies as labour force growth slows and, in many cases, shrinks.

2. The acceleration of new technologies – Technological advancement is both a boon and a bane, becoming the principal driver of economic growth and improvements in quality of life while also being a primary source of disruption and dislocation.

3. Deglobalization – Russia’s invasion of Ukraine is the latest step toward a more fractured world, as forces of deglobalization increase economic and geopolitical friction.

4. Climate change – While the effects and urgency of global warming are becoming increasingly apparent and accepted, the transition to a clean energy future will likely take longer and cost more than many suggest.

But what happens when the entire planet is disrupted overnight?

As we saw with the pandemic and now with the war in Ukraine, predicting the next major global disruption is near impossible. However, preparing for and guiding others through an environment of uncertainty has become an essential leadership skill.

The best-performing companies disrupt and reinvent themselves on a continual and ongoing basis. And this is also true of those who lead them. Today’s leaders must have the courage to break away from tried-and-true but rapidly fraying business models, even when it feels hard.

Prioritization means planning carefully and setting priorities with limited resources and then maintaining focus, measuring progress and ensuring accountabilities on these priorities. For many companies, rapid growth and accommodative financing in recent years have delayed many hard choices but a more difficult economic and financial environment will accelerate the need to focus.

General Electric’s decision to split itself into three pieces last year was a bold one. The decision was the natural endpoint of an extensive transformation project led by CEO Larry Culp, which included selling businesses, improving manufacturing processes and cutting debt. General Electric (GE) had to be broken down before it could be broken up. But the three-company solution was a clear win for both customers and shareholders. 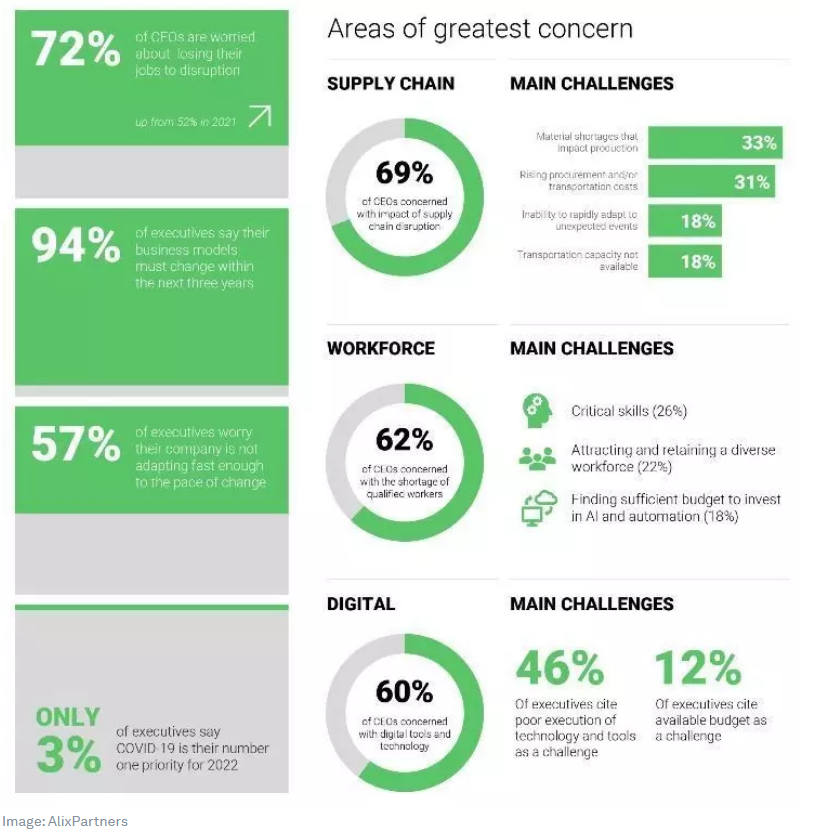 It’s impossible to overestimate the importance of execution. That is why it is important to take an action mindset – plan less and do more.

The time you have to drive value in business is often less than you anticipate and market volatility is currently at a high. Interest rates and inflationary pressures are rising as the pace of global growth slows. Ninety-four percent of executives believe their business models must change within the next three years. In order to make that transition, change has to begin today. The worst possible decision is to do nothing.

A broad group of stakeholders demand values-led leadership, which means being guided by a compass to do what is right rather than what is expedient or minimally necessary.

You must be your own chief communications officer, communicating clearly, regularly and consistently. Once leaders become tired of delivering their message, that is usually when a critical mass of stakeholders have heard it. Leadership, by definition, requires followership. If you’re not bringing others along on your journey – inspiring and guiding them – then any transformation is doomed to failure.

In a volatile environment, clarity, control and speed are essential. From our experience, leaders must lean into the forces of change, taking required and swift action before they lose the ability to set their own destiny. The macro-environment may not be in anyone’s control but you can direct how you respond and the rate at which you do so.