Can We Get Better at Navigating Uncertainty?

"As frightening as it seems, uncertainty can bring new opportunities when we learn to navigate it well".

Why are we so often unnerved by uncertainty? If you look back at the most significant events in your life, those which you are the most proud of – such as the big career shift, the geographic move, that important relationship – didn’t they all come after a period of uncertainty?

And consider that almost all innovations, breakthroughs, transformations and changes come only after first stepping into the unknown. Even when you didn’t choose uncertainty, such as the unknowns brought about by the Covid-19 pandemic, weren’t there still possibilities hidden in the wings? Although we often try to avoid uncertainty, we forget that uncertainty and possibility are really two sides of the same coin. If we want new opportunities and possibilities, we first need to go through uncertainty.

Why we fear uncertainty

Evolution has wired us to fear uncertainty. This presents a challenge because, despite your best efforts to resist, uncertainty has been increasing for decades. Driven by shifts in technology that lower barriers to entry, greater global participation and connectedness, and numerous other factors, it is clear that uncertainty has become a regular part of our personal and professional lives. The World Uncertainty Index, which tracks political and economic uncertainty, has seen a steady upward trend since the index was started in the 1990s.

The challenge is that most of us were not taught to deal with uncertainty. It simply is not a skill taught in school or handed down by parents. As our world becomes ever more uncertain, the lack of skills to deal with the unknown may result in anxiety, over-reaction and rumination – if not mental paralysis. As Jostein Solheim, former CEO of Ben & Jerry’s put it, “There is ambiguity and paradox everywhere … For people who like the linear route forward, life is getting harder and harder in any field.”

In my new book The Upside of Uncertainty with co-author Susannah Harmon Furr, we describe over 30 tools organised around a “first aid tool kit” for facing the unknown (see diagram). We illustrate these tools with our interviews with pathbreakers, innovators, designers, scientists, but also other groups of people who face uncertainty, such as paramedic-turned-film-producer Ben Gilmour and venture capitalist David Hornik, who graduated from Harvard Law School in spite of dyslexia. We distilled insights from these first-hand accounts and developed practical tools to develop the uncertainty ability. The tool kit is meant to help those facing uncertainty to find the “upside” of uncertainty.

The tools for facing uncertainty are organised into four categories: reframe, prime, do and sustain. Some tools in each group are highlighted below. 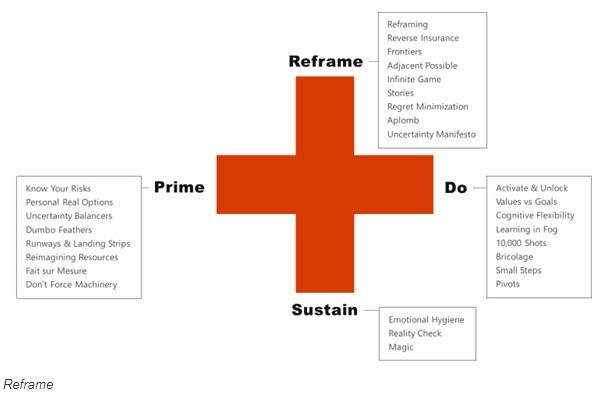 The first and most crucial step is to reframe uncertainty. Studies have shown that how you describe uncertainty affects how you think, decide and act. Since humans are inherently gain-seeking and loss-averse, if treatment 1 for a new disease is described as 95 percent effective versus treatment 2 that is 5 percent ineffective, we are more likely to choose treatment 1 even though both are statistically identical.

One reframing tool is the infinite game approach originally developed by New York University professor and philosopher, James Carse. Are you living your life with an “finite” lens where you learn and play by the rules to win, or living a more “infinite” game where you can question and bend your role, the rules, the boundaries and even purpose of the game? Also, consider reframing frontiers – be it geographical, technological, or personal ones related to intellectual, social, emotional or financial aspects of your life.

Priming makes uncertainty less menacing by helping you develop self-knowledge and the conditions to pursue new projects or navigate unexpected uncertainty better. This starts with knowing your acceptance (or aversion) for a range of risks such as financial, emotional, social, physical, intellectual, political, etc. With that self-awareness, you can build your risk tolerance by taking smaller risks, even in non-related fields to increase your ability to take other risks. Another way is to simplify your life by outsourcing to focus your efforts on tackling the unknown.

Part of priming is to recognise that even the greatest innovators among us have limits to how much uncertainty they can endure. Innovators such as Steve Jobs (think black turtleneck tops) have learnt to maintain fixed habits, routines and rituals as “uncertainty balancers” that bolster stability in some parts of their lives to counterbalance parts that are in flux. Match.com founder Sam Yagan said, “My best friends are from my junior high and high school. I married my high school sweetheart, … given how much ambiguity I [deal with] at work, I do look for less in other areas of my life.”

To navigate uncertainty, the next step is to take action. Our research demonstrates that most successful breakthroughs and start-ups are not made with a single giant step, but through a series of small incremental steps and changes in course along the way. We also learn from the best start-up accelerators that the best way to learn your way through uncertain environments is to talk to as many people from as many different backgrounds, as soon and quickly as possible.

One of the most empowering skills is to set yourself up so that you cannot fail. David Heinemeier Hansson, creator of the Ruby on Rails full-stack framework and cofounder of multiple start-ups like Basecamp and Hey.com, uses an approach we call “values over goals”. Instead of focusing on a goal (which under uncertainty is just a guess), he argues that focusing on achieving your intrinsic values (which for him includes coding great software and acting ethically in the market) ensures that you can succeed, no matter how the external world responds. Uncertainty is best resolved by taking action, but if you do so based on your values – such as learning, growth, discovery, and living the life you care about – you can ensure your own success.

Another tool is to activate and unlock what’s already present instead of inventing a new solution. Maria Montessori developed an eponymous early childhood education method that activates and unlocks the natural curiosity of children with intellectual and developmental disabilities instead of reinventing the wheel.

Two important ingredients to sustain action in times of uncertainty are: emotional hygiene and reality check. We need to attend to our emotions – like how you would a physical wound – to prevent paralysing self-doubt or unproductive rumination. At the same time, recognise that setbacks and failure are part of the learning journey. Another ingredient we often neglect is to interact with the people, places and things that increase your chances of the leaps in insight, connection and serendipity that can change everything.

“Science is full of uncertainty,” said Ben Feringa, winner of the 2016 Nobel Prize in chemistry for his work on the molecular machines that could one day power nanobots in your blood to protect you from cancer or repair the pipes in your house from the inside. When asked how he deals with the uncertainty that attends scientific breakthroughs, he explained, “If you deal with uncertainty you will fail,” so you have to “get resilient at handling the frustration that comes with uncertainty”. This involves letting himself stew for a while over the setback and then asking, “What can I learn from it? What is the next step that I can be working on?”

This ability to find an “upside beyond the ‘failure’” is one of many frustration-management frames innovators use to sustain themselves through uncertainty’s roller coaster of obstacles and breakthroughs.

Harnessing the power of uncertainty

As frightening as it seems, uncertainty can bring new opportunities when we learn to navigate it well. In fact, it can make us stronger, as Nassim Taleb posits in his book Antifragile. The question, again, is how. Beyond resilience, “transilience” is a radical shift in the face of uncertainty and disruption, when we transform uncertainty into new possibilities of discovering new paths for reinventing our lives.

*Associate Professor of Strategy at INSEAD, programme director of Leading Digital Transformation and Innovation, Innovation in the Age of Disruption and Building Digital Partnerships and Ecosystems, Executive Education programmes at INSEAD and the author of best-selling books published by Harvard Press: The Innovator’s Method, Leading Transformation, Innovation Capital and The Upside of Uncertainty
**first published in: knowledge.insead.edu