When you switch on the light or turn up the heating, do you think about where the energy you’re using has come from?

The share of Russian energy imports to the EU declined sharply between the first and second quarter of 2022, Eurostat data shows.

When you switch on the light or turn up the heating, do you think about where the energy you’re using has come from?

Until recently, many of us probably didn’t give it much thought. But a range of factors - Russia’s military aggression against Ukraine, a surge in energy prices and an increasing awareness of sustainability - have propelled energy up the news agenda and made it a talking point in many households around the world.

The European Union imported more than half (57.5%) of its energy in 2020, according to Eurostat. That creates issues when geopolitical tensions disrupt trade pathways. Russia has long been the main supplier to the EU of natural gas, crude oil and hard coal, something that became problematic when the country invaded its neighbour Ukraine in February 2022.

Energy as a weapon

Weaponization of energy has become a theme of Russia’s war and strategy, with gas pipelines exploding between Russia and Europe, and Russia attacking Ukrainian energy infrastructure, leaving citizens without power in freezing conditions.

In March 2022, leaders of the 27 EU member states said they wanted to move toward energy independence and agreed to phase out Russian fossil fuels as soon as possible.

So how are they doing?

After adjusting for seasonal factors, Russia’s share of EU energy imports was roughly stable until the first quarter of 2022 - between 26% and 27.6% - Eurostat data shows. 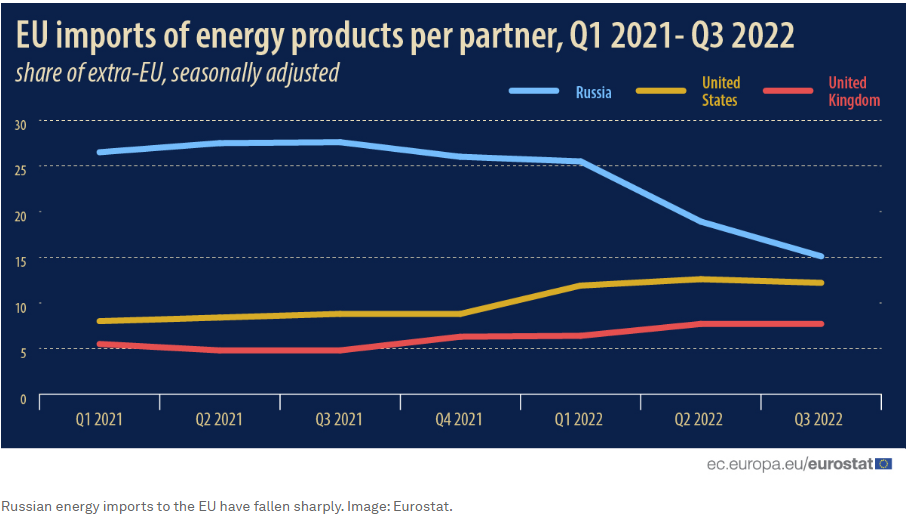 The US and the UK are making up some of the difference. In the third quarter, energy imports from the US represented 12.2% of the total, while the UK was 7.7%.

The challenges of importing a large proportion of your energy needs are laid out in the World Economic Forum’s Energy Transition Index, a gauge that benchmarks the progress of countries’ energy transitions.

The upheaval and spill over created by Russia’s invasion of Ukraine underscores the complexity of the global energy transition and the need to balance affordability, security and sustainability.

“High energy prices and new risks of energy shortages, resulting from the fast COVID-19 economic recovery and the war in Ukraine, have forced a reprioritization of energy security,” the latest Energy Transition Index report says. “Countries can strengthen energy security by diversifying their fuel import partners in the short term and diversifying their energy mix with low-carbon alternatives and improving energy efficiency in the long term.”

For the EU it means bringing production of primary energy back to home turf, when in recent years the trend has been in the other direction. Production in the EU was 17.7% lower in 2020 than it had been a decade earlier, Eurostat data shows.

Primary energy production varies by country, with France the biggest producer in 2020 at 21.4 % share of the EU total, followed by Germany, 17.1 %, and Poland, 10.1 %. The growth of primary production from renewable energy sources exceeded that of all the other energy types in the decade from 2010 to 2020.

Weaning off Russian energy and using renewables has become a key talking point across the EU and around the world.

While a balanced approach is needed, the Forum says all countries need to do more to increase renewable production.

“The current energy crisis presents a good opportunity to increase the speed of the transition and strengthen its resilience to future challenges,” the Energy Transition Index report says. “Only by everyone working together will it be possible to advance the collective transition journey to 2050 and achieve the relentless progress the world requires and deserves. The time for action is now.”