Poland Is Europe’s Growth Champion. Can This Continue?

Key elements of the Polish success story resemble that of the German post-war economic story, especially relying on social and economic inclusiveness as a driver of economic success

In 2018, the average level of income in Poland exceeded two-thirds of the average level of the Eurozone. That is an impressive achievement for a country that only entered the EU in 2004 and had to shed the painful legacy of decades of Communist rule
By Marcin Piatkowski*
Amidst all the current political hoopla, the key story concerning Poland’s path over the past 30 years is not receiving the attention it deserves. The country has been recording high levels of growth since 1989 and is making strides in catching up with Western Europe.
The Polish economy has become a key European success story. Since 1995, Poland has also become the fastest-growing large economy in the world among large countries at a similar level of development. It is beating even the Asian tigers such as South Korea, Singapore and Taiwan.
The roots of success

What about the roots of Poland’s success? Do they offer lessons for its neighbors? And what must Poland do to continue its progress in the coming decades?
To get a sense of the historic achievement, it is worth recalling that, for most of more than a thousand years of its history, Poland (along with the rest of Central and Eastern Europe) was a perennial economic underachiever.
The country was essentially stranded on the periphery of the European economy. Internally as well, Poles never managed to pull together enough social consensus to create a dynamic economy.
Adam Smith, the venerable voice of market thinking, had derided 18th century Poland for not being able to produce “any manufactures of any kind, a few of those coarser household manufactures excepted, without which no country can well subsist.”
It is no surprise under those circumstances that Poland’s per capita GDP, measured on a purchasing power parity basis, from the start of the 17th century until very recently, almost never exceeded half of the average level of Western Europe.
And as recently as 1991, at the bottom of the post-communist recession, the average income of Poles plummeted to less than one-third of the real income of an average German (and to less than one-tenth in nominal terms).
At the time, Poles even earned less than the citizens of Gabon, Ukraine or Suriname. In 1989, there were hardly any experts who would bet any money on Poland’s future economic success.
Modern success

And yet, almost 30 years later, Poland has become by far the most successful economy in Europe. Since 1989, it has increased its GDP per capita by almost 150%, more than any other country on the continent.
By comparison, per capita incomes in the Czech Republic increased by only three-quarters, in Hungary by barely half, while the Eurozone’s performance improved by less than 40%. In purchasing power terms, Poland’s GDP per capita grew even faster from $10,300 in 1990 to more than $28,000 in 2018 (in 2011 constant dollars).
In 2018, the average level of income in Poland exceeded two-thirds of the average level of the Eurozone. That is an impressive achievement for a country that only entered the EU in 2004 and had to shed the painful legacy of decades of Communist rule (See Figure 1 below).
Little wonder then that Poland this year became the first post-communist country to join the FTSE Russell list of developed countries.
The roots of Polish growth

This success has occurred despite Poland having no natural resources. It is also based on real growth, as the country has managed to keep public and private debt levels low.
Better yet, economic growth has been such that it is truly a tide that has been lifting all boats. For the first time in Poland’s history, its economy is supported by an inclusive, egalitarian, well-educated and socially mobile society, which has allowed the whole population to flourish.
Indeed, Poland has been the only post-communist economy where incomes for the whole of society have grown faster than the G-7 average.
Unlike most other fast-growing economies around the world, Poland has achieved its remarkable catch-up with the West while being robustly democratic. This robustness is underscored by the fact that Poland has had 17 different governments from the left, right and center since the start of the transition in 1990.
But how did this thousand-year long economic laggard manage to step up and become Europe’s growth champion?
In a new book, I argue that after 1989 Poland was successful for the first time ever because it adopted good economic policies, including a deep economic reform in 1990-91, fast institution building, foreign debt restructuring, a boom in education as well as an open and transparent privatization process.
Crucial as well has been the fact that Poland, unlike most other Central and East European economies, did not produce oligarchs. At the beginning of the post-communist transition, it did not matter what last name one had, where he or she was from or what parents someone had. All of today’s billionaires in Poland are market-based and self-made.
What drove good economic policies?

Of course, the key question is this: If good economic policies drove good economic outcomes, then what drove good economic policies?
For most of its history, Poland was a perfect illustration of an extractive society. It was the Second World War and – above all – the shock of communism that demolished the old, feudal, pre-modern and harmful social structures, opening up society.
This newly emerged, socially inclusive society was not visible until 1989. It was buried under the distortions, dysfunctions and absurdities of a planned economy. But when real socialism collapsed, it established the foundations for the subsequent economic miracle.
And yet, this element should not make Poland’s performance so different to that of similar countries like the Czech Republic and Hungary, where people had been better off than Poland in Communist times.
Needless to say that all these countries, as well as the other ex-Warsaw Pact countries, shared a strong social consensus that their respective country should become like Western Europe and meet all the conditions to accede to the European Union as quickly as possible.
This is where the second – and perhaps decisive – element explaining Poland’s success comes in. Almost the entire transition period, including those 17 different governments, was based on the high quality of policymaking elites, especially finance ministers and central bankers.
Unlike their Eastern peers in Ukraine or Russia, for instance, Polish officials, even while representing quite different parties, knew exactly where they needed to be going.
It helped that almost every single economic policymaker in Poland after 1989 had studied in the West, learning modern economics. In contrast, until 2002, no Bulgarian minister of finance even spoke English, to give but one example.
Will Poland’s success continue?

As impressive as Poland’s ongoing GDP growth performance is — reaching 5% in 2018 and a projected 3.5-4% growth in 2019 and 2020 — Poland’s continued catch-up with the West will need to be supported by an upgraded growth model, which I call the “Warsaw Consensus.”
If the policies of the Warsaw Consensus were implemented, Poland ought to be able to grow at more than 3% per year and catch up with the West within the life of the next generation. Then, Poland’s miracle can continue.
For that to happen, Polish society must remain inclusive. This is something that the current government, despite triggering domestic strife in other regards, has performed well on. For example, it has introduced a child cash transfer scheme that has almost eliminated extreme poverty. It also increased the minimum wage and made taxes more progressive.
Polish-German “cross-border” learnings

In many ways, key elements of the Polish success story resemble that of the German post-war economic story, especially if one thinks of social and economic inclusiveness as a key driver of economic success.
Thankfully, the dynamics of economic history do not just move in one direction. For that reason, it is relevant to ask what lessons Poland’s recent experience and current performance now holds for the German and the Western European economy.
One key lesson is the importance of education: Today’s 15-year old high-school students in Poland are as well educated as their German peers, even though Germany spends more than 60% more on each student (in PPP terms, see Figure below).
Over the last 20 years, more young Poles have also studied at the university level than in Germany (see Figure 3 below).
Investment in infrastructure

The other lesson is the importance of investment in modern infrastructure: The level of Poland’s mobile broadband penetration, for instance, is higher than in Germany (Figure below) and the speed and the costs are lower, too.
The third lesson is the importance of open markets: Poland’s economic success is a blueprint for the win-win benefits of the EU single market. German exports to Poland are now more than twice as high as exports to Russia.
The benefits of open markets, supported by good economic policies, are also larger than the benefits of public subsidies: Eastern Germany, despite having received more than one trillion euro since the unification, has caught up on Western Germany less than Poland did with much less money (since its EU accession, Poland has received slightly more than 100 billion euro from the EU funds).

The risks to Poland’s continued success are well-known: Population aging, demographic decline, low level of innovation and low investment.
But the key risk to Poland’s future is the weakening of the European Union. Without the EU, Poland would revert back to the dark periods of its history and be relegated again to the periphery of the European continent, where it has languished for long centuries in the past. 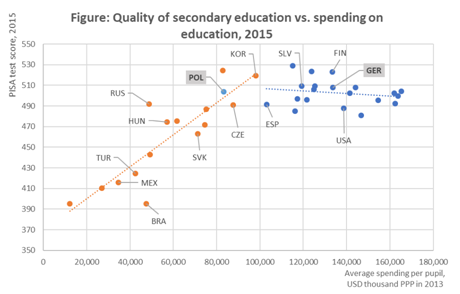 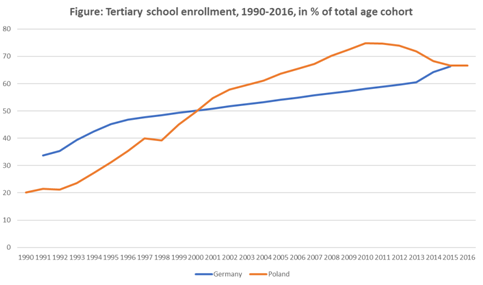 *Author of “Europe’s Growth Champion. Insights from the Economic Rise of Poland”, Oxford University Press 2018, which has been selected by Book Authority as one of the “Top 15 Development Economics Books to Read in 2019
** First published in theglobalist.com

Elected in June, the new ‘ecologist’ mayors in France are trying to put their stamp on the daily life of their communes