We need a reskilling revolution. Here’s how to make it happen

As the world faces the transformative economic, social and environmental challenges of Globalization 4.0, it has never been more important to invest in people

The Fourth Industrial Revolution is causing a large-scale decline in some roles as they become redundant or automated. According to the 2018 Future of Jobs Report, 75 million jobs are expected to be displaced by 2022 in 20 major economies. At the same time, technological advances and new ways of working could also create 133 million new roles, driven by large-scale growth in new products and services that would allow people to work with machines and algorithms to meet the demands of demographic shifts and economic changes.

As the world faces the transformative economic, social and environmental challenges of Globalization 4.0, it has never been more important to invest in people.

Valuing human capital not only serves to equip individuals with the knowledge and skills to respond to systemic shifts, it also empowers them to take part in creating a more equal, inclusive and sustainable world.

Education is and will remain critical for promoting inclusive economic growth and providing a future of opportunity for all. But as the technologies of the Fourth Industrial Revolution create new pressures on labour markets, education reform, lifelong learning and reskilling initiatives will be key to ensuring both that individuals have access to economic opportunity by remaining competitive in the new world of work, and that businesses have access to the talent they need for the jobs of the future.

The Fourth Industrial Revolution is causing a large-scale decline in some roles as they become redundant or automated. According to the 2018 Future of Jobs Report, 75 million jobs are expected to be displaced by 2022 in 20 major economies. At the same time, technological advances and new ways of working could also create 133 million new roles, driven by large-scale growth in new products and services that would allow people to work with machines and algorithms to meet the demands of demographic shifts and economic changes. 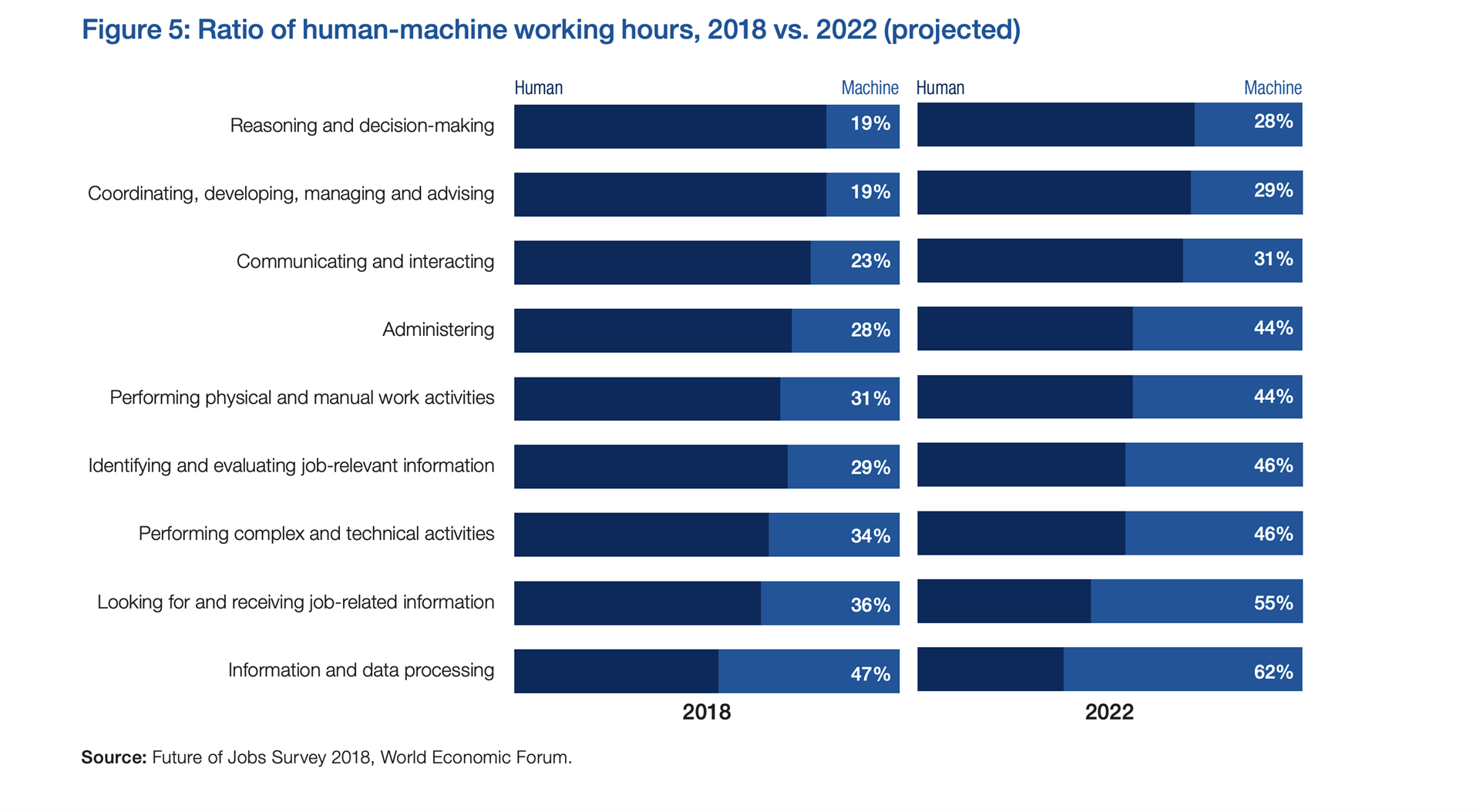 To proactively realise the benefits of these changes, at least 54% of all employees will need reskilling and upskilling by 2022. Yet only 30% of employees at risk of job displacement from technological changes received training in the past year, and those most at risk are often the ones who are least likely to receive any retraining at all.

Creating a reskilling revolution will require investment. For example, transitioning 95% of at-risk workers in the United States into new jobs through reskilling may cost more than $34 billion. Yet the private sector could today only profitably reskill about 25% of those workers, suggesting a need for business collaboration, government investment and public-private collaboration to lower costs and reach scale.

If businesses work together to create economies of scale, they could collectively reskill 45% of at-risk workers. If governments join this effort, they could reskill as many as 77% of all at-risk workers, while benefiting from returns on investment in the form of increased tax returns and lower social costs including unemployment compensation. When businesses can’t profitably cover costs and governments can’t provide the solutions alone, it becomes imperative to turn to public-private partnerships that lower costs and provide concrete social benefits and actionable solutions for workers.

In addition, such measures should be complemented by strategic rethinking on how work is regulated and which areas of job creation could enhance societal benefits. A recent white paper suggests that countries should work to increase public and private investment in three areas: people’s capabilities, institutions and rules related to work, and sectors that are poised for growth and that benefit society, including care, education, water, energy, and digital and transport infrastructure.

The World Economic Forum provides a platform for such alliances to urgently deliver new skills for today’s workforce as well as designing education for the future workforce. The Closing the Skills Gap initiative serves as a platform to focus fragmented actions within one overarching mission to address future-oriented skills development, while at the same time supporting constructive public-private collaboration on urgent and fundamental reform of education systems and labour policies to prepare workforces for the future of jobs through country-specific programs, global and regional exchanges of best practices, and global business commitments.

These efforts have resulted in a global network of public-private task national task forces in India, South Africa, Argentina and Oman, in addition to several global partner companies pledging to reskill or upskill 17 million workers globally, exceeding the 2018 goal to help 10 million workers by 2020.

As we transform education and labour markets, it is also imperative that we take into account the specific effects on various groups. For example, given how our labour markets are currently segmented, the burden of job displacement and skills gap trends will likely fall disproportionately on women. They hold many of the jobs likely to be replaced and are underrepresented in the fields most likely to see job growth. For example, only 22% of people working in artificial intelligence are women.

Yet new sources of job creation also provide a unique opportunity to hardwire gender parity into the future of work. Leapfrogging to gender parity requires proactive measures from business and governments to ensure women are equally represented in the highest-growth occupations and most in-demand skillsets. The World Economic Forum is calling on companies to identify the five fastest-growing jobs and commit to hiring equal numbers of men and women.

These efforts and others to invest in developing the talent and potential of all people can be the bridge we need to move to inclusive, sustainable growth that leverages technology to create opportunity for all. Investing in people can transform them from passive observers of disruption to active leaders of positive change in their local, regional and global communities.

Borge Brende is President of the World Economic Forum and Human Capital Champion with the Human Capital Project, a World Bank project to increase equity and inclusive growth.