The LDCs’ share of world trade is below 1%, with over half of that split between three graduating countries – Angola, Bangladesh and Myanmar. What’s more, exports from these countries are concentrated in a narrow set of low value-added goods, with 60% comprising primary products – from industries such as agriculture, fishing and mining. This lack of diversification can increase vulnerability to external shocks and undermine long-term development prospects.

By Violeta Gonzalez and Fabrice Lehmann*

The World Trade Organization’s (WTO) Aid for Trade initiative is designed to connect developing countries to the global trade system in a sustainable manner. For the world’s poorest countries – where trade plays an essential role in their economic development – it can be a powerful tool to help achieve the UN’s Sustainable Development Goals (SDGs).

This week, from 3-5 July, the biennial Aid for Trade Global Review is being held at the WTO under the theme "Supporting Economic Diversification and Empowerment". Aid for trade represents about 30% (or $40 billion per year) of official development funding to developing countries. In 2017, commitments to the least developed countries (LDCs) reached $18.8 billion – a threefold increase since 2005.

Although progress has been made, 35 of the 47 LDCs are yet to meet any of the thresholds required to graduate from LDC status. These are based on three national criteria: per capita income, a human assets index and an economic vulnerability index.

The LDCs’ share of world trade is below 1%, with over half of that split between three graduating countries – Angola, Bangladesh and Myanmar. What’s more, exports from these countries are concentrated in a narrow set of low value-added goods, with 60% comprising primary products – from industries such as agriculture, fishing and mining. This lack of diversification can increase vulnerability to external shocks and undermine long-term development prospects. 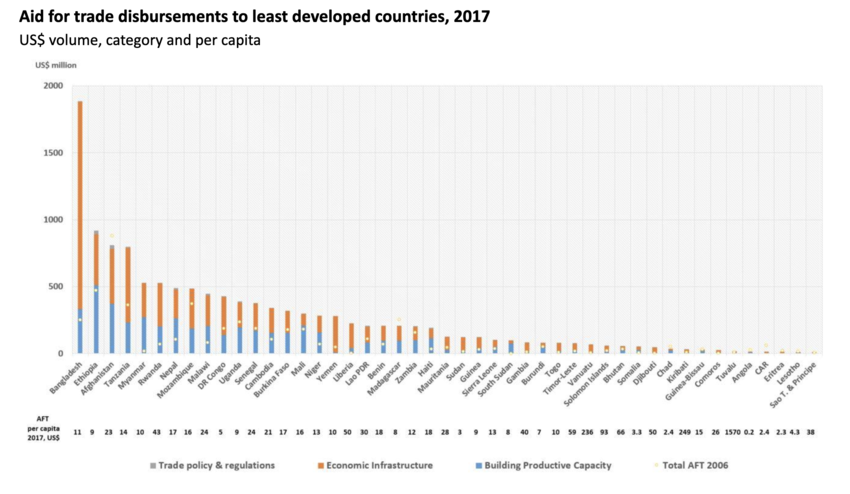 As part of the broader vision set out in the 2030 Agenda for Sustainable Development, the international community has committed to “significantly increase the exports of developing countries, in particular to doubling the least developed countries’ share of global exports by 2020.” Although this latter target will not be met, aid for trade remains an important instrument for the sustainable integration of LDCs in the world economy.

Here are five cross-cutting issues to consider, drawn from the key findings of a policy series on aid for trade and LDCs that the Enhanced Integrated Framework developed in the build-up to this year’s global review.

The spread of global value chains is just one form of economic interdependence with implications for LDCs. The growing importance of knowledge-based, intangible assets and the inexorable rise of the data-fuelled digital economy provide avenues for convergence, but also raise formidable challenges for poor countries and their populations.

What types of strategies should latecomers to development consider to stimulate economic diversification – seeking to exploit new possibilities in manufacturing or services for example – and maximise the potential gains from integration?

How can the benefits of data and artificial intelligence be equitably leveraged to meet the needs of the digital transformation for development in LDCs? These are some of the questions that will weigh on future aid for trade agendas.

More than 60% ($11.7 billion) of aid for trade commitments to LDCs in 2017 was earmarked for support and economic infrastructure – roads, ports, telecommunications and energy.

Skills, and education more broadly, are also instrumental in building resilient economies and ensuring that domestic enterprises and the local labour force can benefit from participating in the global economy.

With the overall LDC population projected to increase by nearly 40% between 2015 and 2030, skills strategies in tradable sectors like agriculture will be vital for boosting competitiveness and developing export-led trade policies.

4) The inclusive potential of trade in LDCs can be enhanced

Education can help overcome barriers that curtail individual capabilities and access to opportunities. Yet more can be done to support the communities most in need. This includes people who reside in fragile and conflict-afflicted LDCs.

One area of intervention that can redress often deep-seated inequalities is to strengthen gender responsive support in order to contribute to the economic empowerment of women living in poverty. Gender-marked aid for trade to LDCs has risen from 17% to 40% of overall support – one of the challenges is to establish monitoring and evaluation systems, with data and indicators that adequately assess the long-term impact on women and the development of such programmes.

5) The environmental impact of trade in LDCs can be improved

LDCs are extremely vulnerable to the impact of climate change and environmental degradation – all of which threaten the progress made in poverty reduction over recent decades. Trade generates conflicting environmental impacts overall, and poor countries are no exception.

Aid for trade can be a means to implement sustainable development strategies guided by sound environmental principles.

This includes sustainability standards in industry, the promotion of climate-resilient infrastructure, the maintenance of ecosystem services through reforestation, the encouragement of sustainable agricultural practices and the transition to clean and affordable energy.

The discussion around fisheries subsidies is an example where aid for trade can help support LDCs to redesign subsidy programmes and implement a future multilateral agreement intended to contribute to the sustainability of oceans.

As part of a concerted effort by the international community, alongside national governments, civil society and the private sector, consideration of these five issues would enable aid for trade to work towards a sustainable global economy, in which the poorest countries and their people have the opportunity to prosper.