The World’s Most Innovative Countries, 2019

Continuing innovations in health and medicine have led to economic growth and a better quality of life for many around the world. But inequalities could grow rapidly

Social challenges to innovation in health should not be ignored. Many people around the world lack access to quality healthcare. Rising health costs are also an issue, in particular, out-of-pocket payments by private households without complete medical insurance.

Innovation and policies related to it are no longer solely the reserve of wealthy countries, as we have seen in more than a decade of the Global Innovation Index (GII). Innovators in developing economies show the world how to do more with less. In India (52), for example, one company has found a way to use accessible technology for early diagnosis of a malady that often strikes premature babies and can blind them if not caught in time. Rather than bringing expensive, complicated equipment to the Indian countryside, Remidio connects compact devices with a smartphone to diagnose retinopathy and enable speedy treatment for babies in far-flung regions. Innovation transcends the tech sector, another example being the Eye Mitra programme, which uses a unique business model to finance healthcare at the base of the pyramid. We have also seen impressive innovation examples with the use of drones to dispatch blood samples and medicines in Rwanda (94) and tele-care in large countries such as China (14).

Healthcare represents an increasingly important share of the global innovation ecosystem, which is why the theme of this year’s GII is “Creating Healthy Lives – The Future of Medical Innovation”. A collaboration between INSEAD, Cornell University and the World Intellectual Property Organization (WIPO), the GII measures a country’s innovation performance based both on its innovation inputs (such as its regulatory environment, higher education, R&D spending and infrastructure) and its innovation outputs (such as its online creativity and knowledge creation).

Our global rankings are the premier tool worldwide for measuring innovation, which often establishes the competitive advantage of countries. In the GII, countries are benchmarked at the regional and income levels. The following image shows the leaders across these benchmarks: 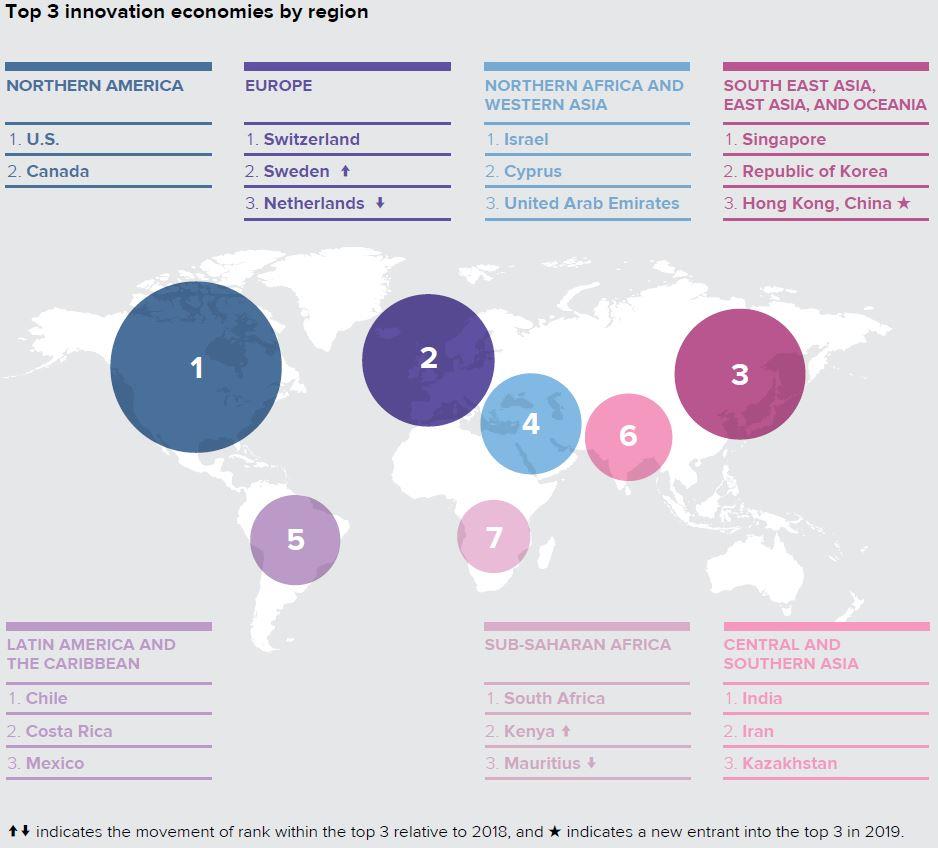 Health and medical innovation is spreading

Ensuring healthy lives is Goal 3 in the UN’s Sustainable Development Goals (SDGs) for 2030. Innovation can boost health in myriad ways: Immunisation, universal health care and investment in the medical work force in developing countries can all be enhanced through innovation. But innovation in other sectors can contribute too. For instance, driverless cars could help reduce the number of deaths due to traffic accidents. 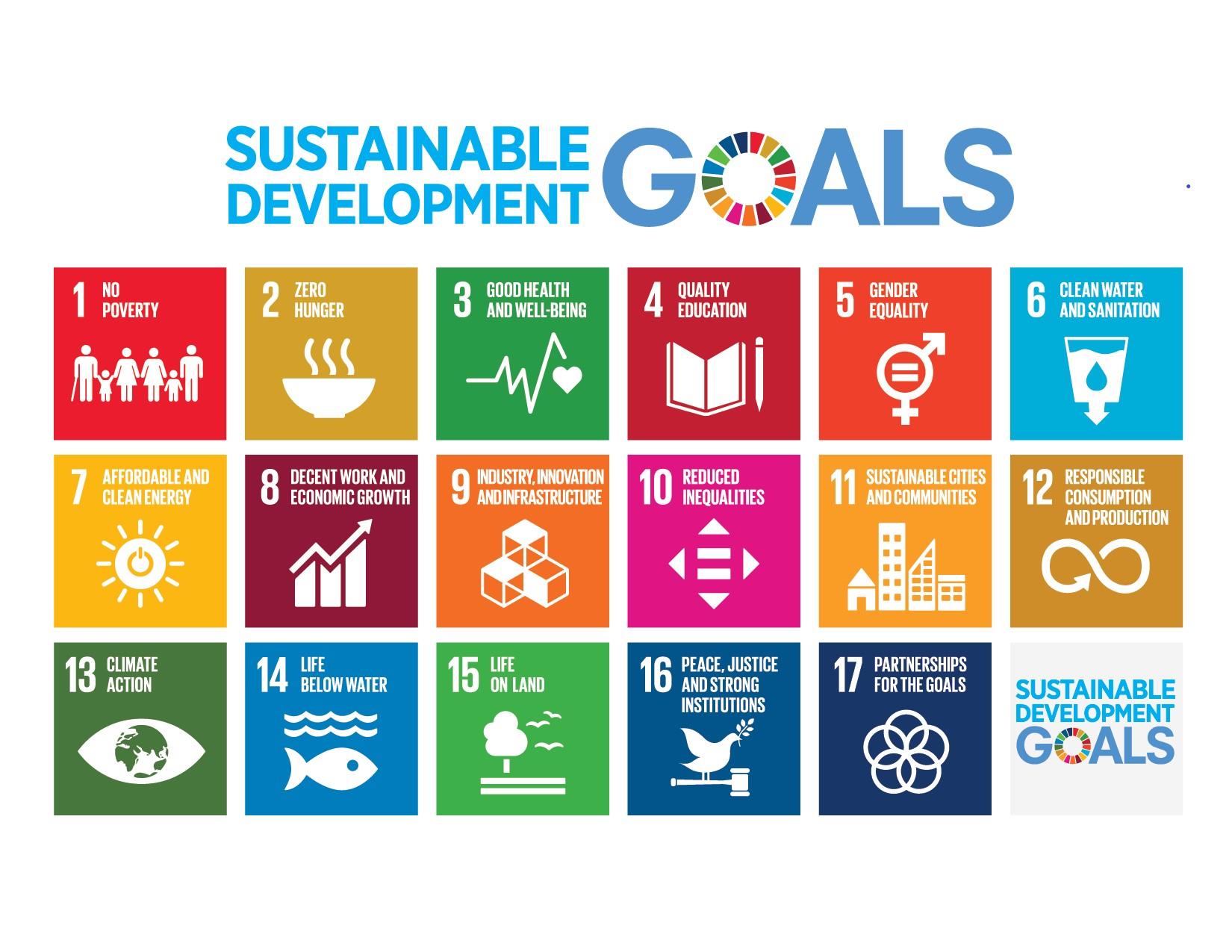 Looking to the future, the GII analyses the forthcoming medical innovation landscape, specifically how technological and non-technological medical innovation will transform the delivery of healthcare worldwide. Singapore (4) has prioritised health and medicine in its national innovation strategy, including its AI development plan. Opportunities could entail cancer immunotherapy, pain management relying on neuroscience without the use of opioids, or non-invasive spinal injury techniques to improve mobility for patients with paralysis.

On the ethical side, genetic engineering requires a number of yet undefined principles and guidance both from the public and private points of view. The urgency is growing, especially considering the increasing use of artificial intelligence in health and medicine.

Social challenges to innovation in health should not be ignored. Many people around the world lack access to quality healthcare. Rising health costs are also an issue, in particular, out-of-pocket payments by private households without complete medical insurance. As the level of income per capita grows in emerging economies, citizens will be able to acquire better access to health services. But there is a dichotomy: In rich countries for instance, wealthier people may focus on extreme longevity, leaving issues such as tropical diseases for others to fund.

The economic challenge raises the largest immediate hurdles. This year’s GII shows how big data and artificial intelligence have begun to dominate the health equation. Those who hold the data and analyse it will become more and more powerful. A large part of health-related decisions may move away from the medical professions into the hands of large data consortium. Companies like Google, Facebook, Baidu or Alibaba might be the next caretakers of health in the world. If insurance companies armed with customer data can anticipate the diseases policy holders may be exposed to, they could have a larger effect on health innovation. This creates economic challenges for the business models of the health sector, and could also aggravate the ethical and social challenges.

The top 10 and beyond

Innovation is no longer limited to a nation’s Science or Technology ministry. The scope and understanding of innovation acceptance now include policies at the level of the environment, food security and, of course, health.

This year’s global leaders are familiar ones: Over the past four GII reports, only 12 countries have made it to the top 10. For the first time, a country from the Northern Africa and Western Asia region has reached the top 10 – Israel (10). It is a world leader in app creation, business sophistication and knowledge and technology outputs. 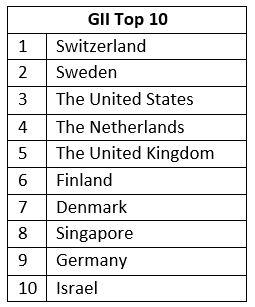 Europe is well represented. Switzerland (1) tops the list for the ninth consecutive year; it is the world leader in intellectual property and environmental performance. Sweden (2) has improved its education and knowledge diffusion measures. The Netherlands (4) performs very well across all the input pillars, especially IP payments and regulatory quality. Although Brexit continues to loom over British politics and economy, the United Kingdom (5) maintains its high quality of scientific publications and universities. Finland (6) moves up one rank and is the world leader in patent families, rule of law and ease of resolving insolvency. Another Nordic country climbing the ranks, Denmark (7) is top in ICT use and government online services. Finally, Germany (9) retains its position in the top 10. 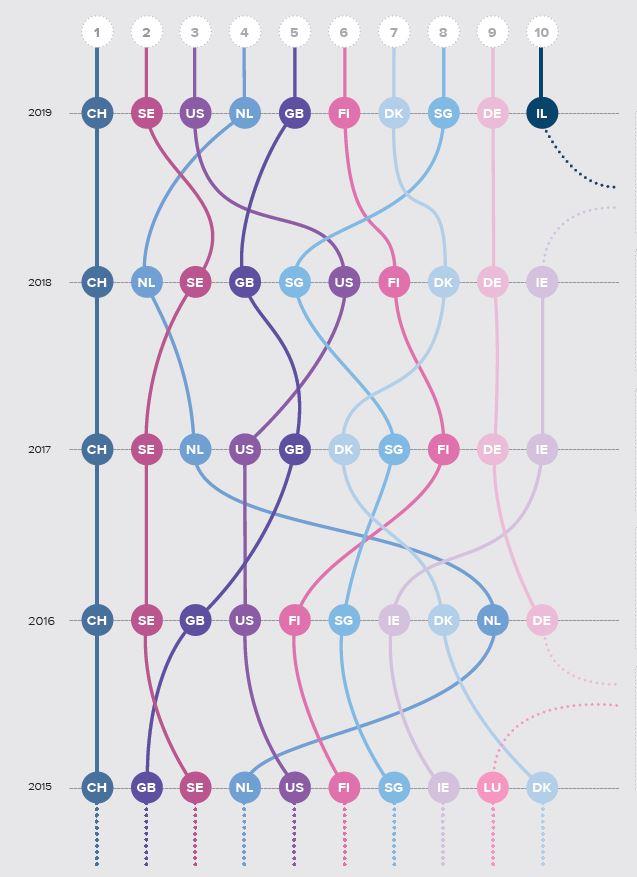 The United States (3) is the top non-European country in the GII this year. Improved availability of innovation data combined with its world-leading position in market sophistication help the North American giant move up the rankings.

Singapore continues to lead Asia in innovation, but Broadcom’s relocation to the US last year impacts its global R&D companies indicator as the firm had been the largest investor in R&D in the country.

Outside of the top 10, European countries still dominate while China continues its rise up the rankings. China is the world leader in knowledge impact, patents by origin and high-tech net exports.

Other notable improvements include those of Viet Nam (42) – a perennial innovation achiever and the top innovation economy in the lower-middle income group – and Thailand (43). Also, the Islamic Republic of Iran (61) continues to climb, albeit not as dramatically as last year.

What makes an innovation champion?

The top performers in our rankings have two things in common: Large economies sustain innovation activities (like the US, China and India) and economies with diverse products/services for export are more innovative (like Switzerland or Singapore). The historical divide between income groups and regions persists. Yet, parts of Asia, in particular, have shown significant progress over the past decade, edging closer to Northern America. Latin America and Africa have had slower progress.

With some uncertainty about the global economic forecast, our hope is that investment in R&D will stay consistent. After previous slowdowns in the world economy and the Great Recession, there was a marked drop-off in government expenditures in R&D (GERD), which contributed to the downward trajectory of GDP growth on a global scale. Hopefully that lesson has been learnt and GERD will continue apace. Continuity and leadership remain critical factors to maintain innovation’s momentum.

*Executive Director for Global Indices at INSEAD. He is a co-editor of the Global Innovation Index
**First Published in Knowledge