Along with economic and geopolitical resilience, environmental resilience will be an increasingly important factor in investment decision-making in 2020, as more investors seek to understand the impact of burgeoning climate risks.

by Richard Bloxam and Jeremy Kelly*

-Commercial property market worth expected to be US$750 billion in 2020.
-Investors increasingly looking for locations with environmental resilience.
-Mid-sized cities with innovation credentials are also an investment target.

Ongoing political uncertainty and mounting concerns of a global economic slowdown made 2019 a bumpy year. Nevertheless, continued strong investor appetite for global direct commercial real estate pushed transaction volumes to an expected US$750 billion in 2019, just short of the near-record levels of 2017 and 2018.

Still, as the current real estate cycle extends into its tenth year, investors are increasingly cautious and are finding it challenging to invest the near-record amount of available capital that sits in funds across the world.

To mitigate uncertainty, we’re seeing investors deploy defensive strategies which address structural shifts including urbanisation, demographics and technology and focus more on locations and sectors that are deemed resilient to economic or geopolitical disruption. They are also focusing on cities rich with innovation and talent, as well as sectors such as industrial and logistics and ‘living’, which are benefiting from a rising share of investment in recent years.

Along with economic and geopolitical resilience, environmental resilience will be an increasingly important factor in investment decision-making in 2020, as more investors seek to understand the impact of burgeoning climate risks.

The top 30 cities for real estate investment in 2019 present a familiar roll call of major cities, with some changes in the order. Established ‘gateway’ cities continue to lead the rankings. New York is now the most active market globally, as the market’s real estate fundamentals continue to benefit from a diversifying economy toward tech and creative industries.

Given the continued record investment in the region, it’s no surprise that 10 Asia Pacific markets feature in the top 30 cities in 2019 – the highest representation since 2009. As investors look further afield, Shanghai, Beijing and Singapore have all seen record investment this year, with over US$12.5 billion (all 2019 investment volumes quoted relate to the Q1-Q3 period) invested by foreigners across the three cities.

In Europe, Berlin has also benefitted from foreign interest, seeing over US$5 billion of inbound capital during 2019; 64% of overall investment and the highest of the top 30 cities. But it’s London that continues to attract most foreign investor interest in the region. Despite cross-border investment halving from last year on the back of Brexit uncertainty, it remains the world’s second-largest destination for cross-border capital with many more investors expected to return once a resolution to Brexit is reached.

The source of capital is also impacting the hierarchy with increased activity from South Korean investors, for example, helping to push Paris and Seoul into second and third place. 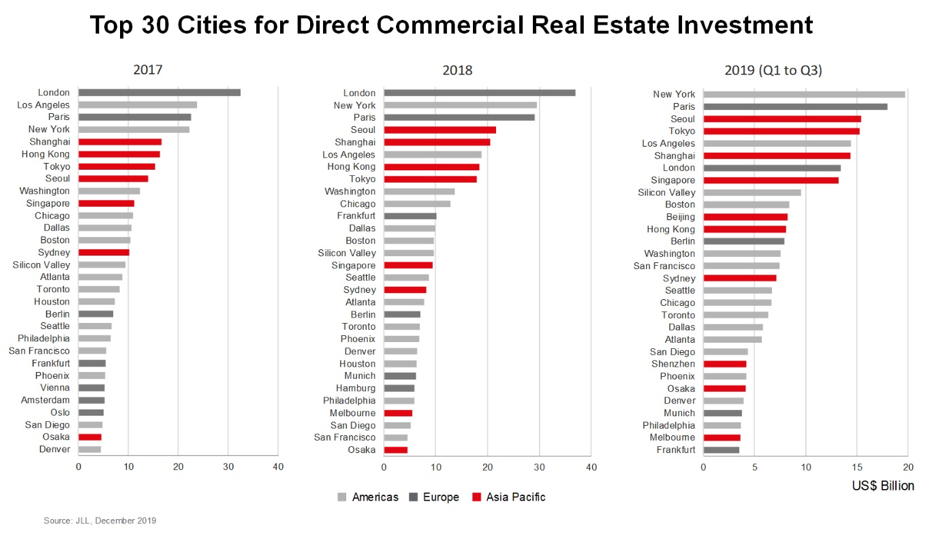 Beyond the ‘gateway’ cities, investors are increasingly looking to secondary cities in mature and transparent markets as they seek stronger growth prospects. Mid-sized cities with innovation credentials or robust demographic trends are accounting for a growing share of global investment, with cities like Austin, Denver and Nashville in the U.S.; Berlin, Lisbon and Vienna in Europe; or Osaka and Fukuoka in Japan, all seeing a strong increase in investor interest over recent years.

These cities are benefitting as more companies look to base themselves in areas that combine a highly qualified workforce with an innovation ecosystem, outside the increasingly expensive ‘gateway’ cities with tight labour markets. Austin and Nashville, for example, have enjoyed major corporate relocations, while Berlin has among the highest levels of high-tech employment in Europe.

Investors are following these companies and are increasingly factoring in talent considerations and innovation potential as a means of mitigating risk and identifying future resilience.

The global leaders for innovation are certainly not being left behind by capital. The U.S. tech-hubs of Silicon Valley, San Francisco, Boston and Seattle each saw double-digit increases in investment volumes this year.

While some cities in China and India are attracting greater investor interest, many cities in emerging markets are struggling to generate sustained demand from institutional investors.

Despite solid growth dynamics, more established markets like Bangkok and Kuala Lumpur, as well as emerging cities like Moscow, Sao Paulo and Taipei, have all registered significantly lower investment in 2019 than earlier in the decade.

Many emerging cities are hampered by comparatively low levels of transparency and issues related to their rapid growth, including environmental degradation and quality of life, which will need to be addressed before they are able to attract greater levels of much-needed capital.

As we move into 2020, global investment volumes are expected to remain elevated as allocations to real estate from institutional investors continue to rise. Despite high valuations and significant competition for assets, the sector remains attractive relative to other major asset classes. But investors will continue to exercise caution, seeking out the sectors and markets in which the concept of ‘resilience’ can be found.