How to accelerate digital literacy in the enterprise world

The impact of automation on the workforce is stark: 59% of Germans will see their employment affected and 47% of current employment in the US is at high risk of computerization through the emergence of artificial intelligence

The introduction of ATMs surprisingly increased employment, but the traditional job changed and new roles evolved, which were customer-facing and involved skills as sales and customer service representatives.

The impact of automation on the workforce is stark: 59% of Germans will see their employment affected and 47% of current employment in the US is at high risk of computerization through the emergence of artificial intelligence.

On a broader scale, those jobs with the highest employment numbers in the US have proportionally the highest displacement rates. Reflecting this, initiatives must involve supporting workers without college degrees because they are most affected by the change.

As technology evolves, there is a “growing skills instability”. As a result, it is anticipated that more than one-half of all employees will require significant retraining in coming years. To build a digital product, all workforces must come together to help the developers without direction and potentially without the skill.

Through the lens of LinkedIn gearing up for the next decade means improving soft skills such as creativity, persuasion, collaboration, adaptability and emotional intelligence along with a set of technology focused hard skills.

Yet, planning for changes is a complex challenge: our societies represent systems of systems, where shifts in the workplace can yield complex societal effects beyond the obvious. A great example is the digitization of a prime everyday task – bank telling.

The introduction of ATMs surprisingly increased employment, but the traditional job changed and new roles evolved, which were customer-facing and involved skills as sales and customer service representatives. The lower cost of operation through the use of ATMs prompted more bank branches to open, which resulted in the employment of additional bank tellers. 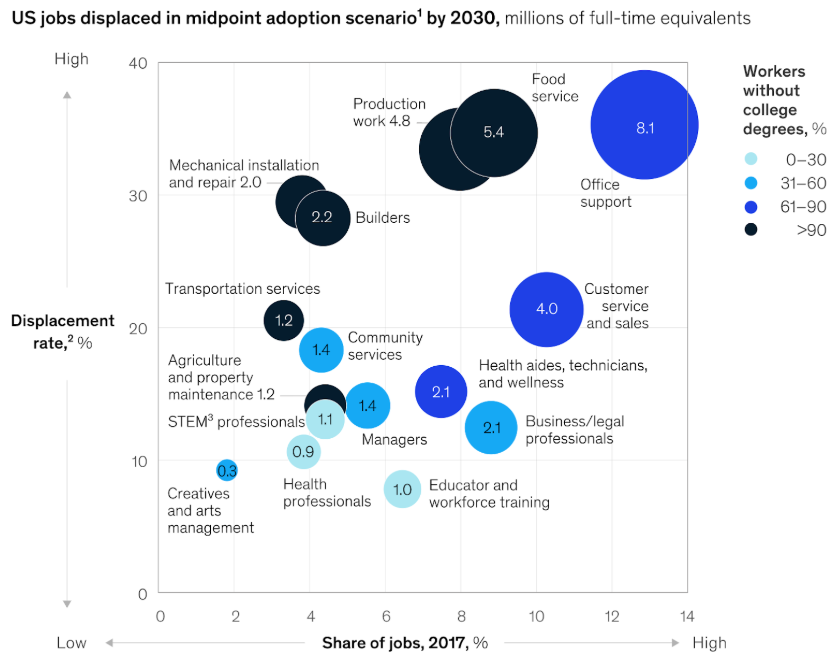 The right leadership: When economists are asked about setting the right environment for change, attention usually focuses on keeping total factor productivity high, but the tangible (hard skills and assets) and intangible (soft skills such as management practices) need to be considered equally by those seeking to build a successful organization. Overall findings emphasize that firms with structured management practices do a better job at hiring the “best people” and are also better able at keeping them over time. A study of MIT’s initiative on the digital economy reveals that occupational leadership, physical and cooperation intensity are the most significant predictors of occupational wage and employment growth.

In addition to micro-level initiatives at a company level, government initiatives such as the Pledge to America’s Workers offer an example of a federal initiative that now has 370 US companies committed to retraining more than 14 million American workers for technology based jobs over the next five years.

The right structure: This focuses specifically on an intangible component of employment, namely skills. The concentration of skills within an organization and the ability to leverage this for the firm’s benefit is of key importance. Rather than pursuing large-scale training for large parts of their workforce, companies have started creating tag teams of functional experts in their business unit with dedicated subject matter experts, which are bundled together in a Centre for Excellence. In the case of software development teams, specific skills are centralized (for example, for specific development activities) and are available to multiple product teams throughout the organization. Initiatives such as re-training employees in technical software development skills have been accelerated by this set-up.

At Xapix, we took a detailed look at the application of this concept in the automotive industry.

To introduce the Centre of Excellence approach effectively, the centre needs to be at the forefront of leading the company’s goal and mission. Its team will combine technical skills specialists as well as those with “human” skills. This will likely contribute to a shift in the company’s structures from the traditional hierarchical command lines towards more agile processes. Additionally, leveraging tools to expand technical tasks through no-code tools to create a community of citizen developers in the broader organization accelerates the teams.

This will inevitably lead to a shift of job functions towards more collaborative roles. The study exemplifies how the technical functions of legal analysts can be performed by automated assistants while humans are trained to collaborate with the machines to create a novel, effective tag team. To implement this in your organization, you need to clearly identify the evolution of skills and collaborative potential with machines as a necessary foundation. 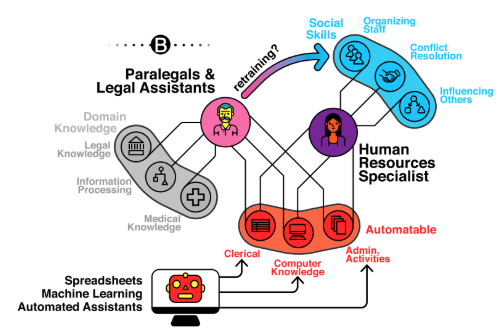 The return on investment

Firms that structure and manage this shift effectively are more likely to see returns through three key drivers:

-Time to market for new initiatives is lower and resources are used more effectively
-Talent retention is higher because the organization is perceived to create work that is more fulfilling, both in terms of meaningful work for the individual and absolute results for teams
-Financial returns exceed those of companies that fail at streamlining the organization, primarily because they lag across time to market and talent retention