Artificial Intelligence (AI) is shaking up the global pecking order, allowing many smaller countries to stand tall in a new competitive landscape

To date, the US has spent far more than any other country on AI. But a large part of that is made up of investments into privately owned AI businesses; it is not necessarily a sign of a coherent nationwide AI strategy.

-Artificial Intelligence could radically reshape geopolitics, according to a new report from Tortoise Intelligence.
-Smaller economies that have talent in abundance and excel at research could start to challenge larger ones.
-China’s centralized AI strategy means it will likely dominate the AI world.

Artificial Intelligence (AI) is shaking up the global pecking order, allowing many smaller countries to stand tall in a new competitive landscape. Established metrics such as gross domestic product (GDP) can tell you at a glance which are the world’s largest economies. But, according to a new report, they won’t tell you which ones are most likely to succeed in a new AI-driven world.

That prize is likely to go to the country, or countries, that are making the right strategic investments now. Those investments are focused on equipping their citizens, businesses and institutions with the tools, technology and training needed for AI. And while the world’s two largest economies - the United States and China - look likely to dominate the AI race, some smaller nations could start to make an impact on the global AI stage.

Against the backdrop of the Fourth Industrial Revolution, which is disrupting the old global business order, having the right AI strategy in place could turn out to be vital.

These are some of the conclusions of an analysis carried out by Tortoise Intelligence. 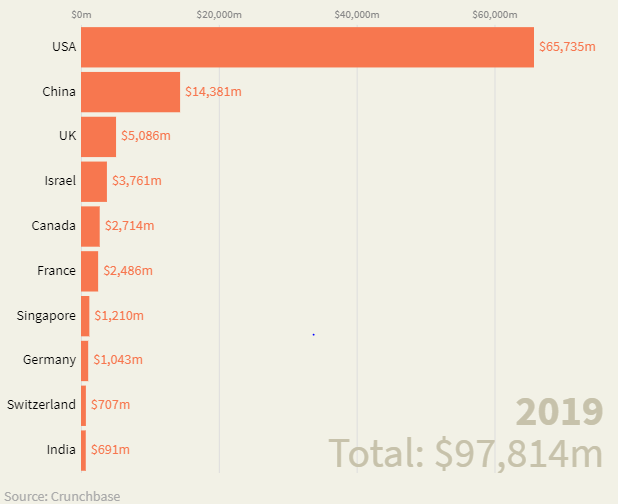 These are some of the conclusions of an analysis carried out by Tortoise Intelligence into the AI investments made by a group of 54 countries.

To date, the US has spent far more than any other country on AI. But a large part of that is made up of investments into privately owned AI businesses; it is not necessarily a sign of a coherent nationwide AI strategy. To see evidence of that, you need to look to China.

China may be in second place right now, but its government-driven industrial policies have committed to a level of AI spending this decade that will eclipse the US. According to Tortoise, the value of China’s AI spending plans are “one-and-a-half times greater than every other country in the world – combined”. It already spends more than the US on AI research. 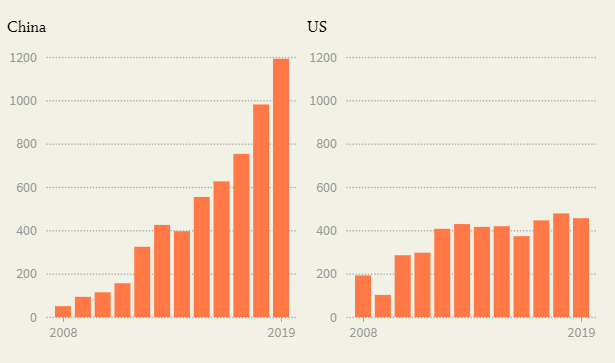 One of the mechanisms used by Tortoise to assess countries’ relative AI performance was to look at the number of articles published by AI academics and experts. The greatest number of these were clustered around two groups of nations: the “traditional champions” and the “rising stars”.

The traditional champions are countries such as Canada, France, Germany and the UK. These are well-established, developed economies that have made good progress on AI. They’re determined not to miss out, but they will never compete with the two superpowers.

The rising stars are an even more interesting collection. They won’t be found in the Top 10 of economies based on GDP. But they have a solid talent base and are demonstrating excellence in research. Singapore, Israel, Ireland and Finland are all in this group, along with Australia, Denmark and Switzerland.

These countries are likely to remain middle-ranking AI economies, but for some smaller nations like those in the Nordics, this could be an opportunity to leapfrog to a much higher spot in the global power league.

For some countries, there are infrastructure challenges that need to be addressed before a serious conversation can be had about their ability to take advantage of AI. These nascent economies – such as Kenya, Sri Lanka, Nigeria, Egypt and Pakistan – could be left even further behind as wealth inequalities are compounded by a widening global digital divide.

But in India, the United Arab Emirates and other nations waking up to AI, there are encouraging signs of progress. India has a large, well-educated middle class that is very tech-savvy, not to mention several multinational technology businesses. Building on those foundations means India’s AI prowess is likely to grow rapidly. While the UAE is the only country in the world to have both a national AI strategy and appointed an AI minister.

On September 16, Commission President Ursula von der Leyen held her first ‘State of the Union’ before the European Parliament in Brussels

Animal farming in EU worse for climate than all cars

A Checklist for Boards in the New Normal

Covid-19 has spurred corporate boards to improvise new practices while keeping those that have served them well. Here’s a run-down