Putting More Women at the Helm of Corporate Boards

Since 2010, we have witnessed a sharp rise in the number of female directors in many developed economies

Since 2010, we have witnessed a sharp rise in the number of female directors in many developed economies. Yet the number of female board chairs has remained very low. Even in Sweden, which leads the world in this aspect, a mere 15 percent of the largest public companies were chaired by women. These low percentages are intriguing, for our earlier research shows that women often outperform men in such critical board-leader competencies as listening and questioning and personal attributes such as restraint and patience. We decided to find out why female representation was so low and to identify some potential remedies. Our latest research indicates that the reasons for the scarcity of female chairs is more nuanced than what gender discrimination on its own might suggest.

In the first stage of our research, we interviewed 30 incumbent board chairs – 15 women and 15 men – as well as 20 shareholders and nomination committee members from the United Kingdom, Finland, Denmark, France, the United States, Australia, Spain and Japan. Five partners from leading executive search companies were also interviewed. The interviewees provided two answers to the question of why there are so few female chairs. 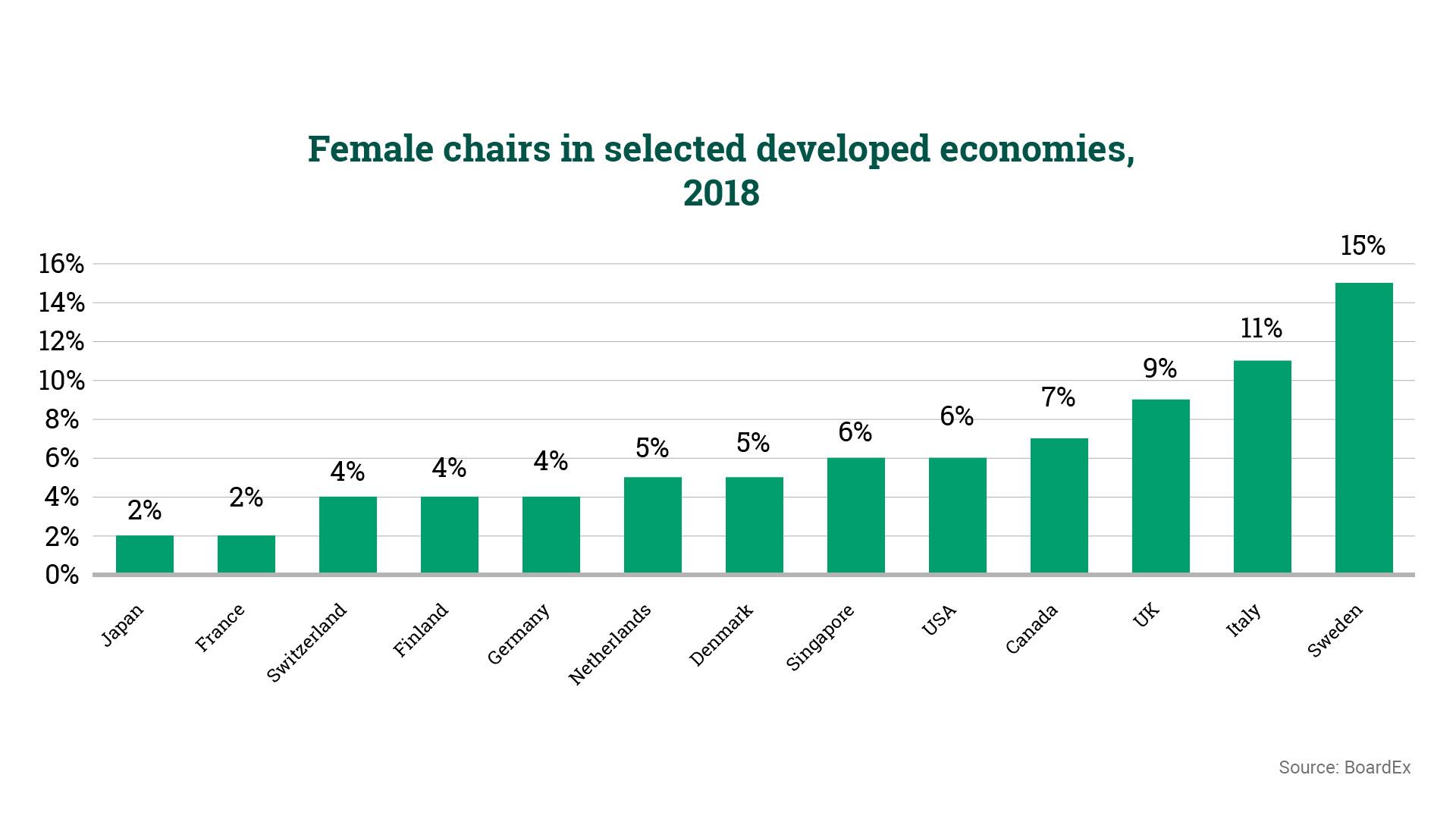 The first hypothesis was that women are sometimes discriminated against – mainly subconsciously – by the people who make nomination decisions: shareholders, incumbent board chairs and members of nomination committees, who are mostly men. The second hypothesis was that women are less willing than men to take on the role of chair due to modesty, education and upbringing, cultural stereotypes and family duties.

We tested both hypotheses in the second stage of our research. Using data from business intelligence service BoardEx, we studied 1,084 chairs (1,019 men and 65 women) at the largest public companies in 13 developed economies: Canada, Denmark, Finland, France, Germany, Italy, the Netherlands, Japan, Singapore, Sweden, Switzerland, the UK and the US.

First, we examined the leadership and social capital of both female and male chairs. If the first hypothesis was true, female chairs would on average have greater leadership and social capital than men. We defined such capital as having been a CEO, having experience as a director and chair of a board committee, having an advanced degree and having attended a top university. Further, if it was more difficult for a woman to become a chair, those who did so should become chairs at a later age than their male counterparts.

We found no statistically significant difference between female and male chairs when it comes to CEO experience, advanced degrees or education at elite universities. Female chairs were also younger than their male counterparts by four years on average. 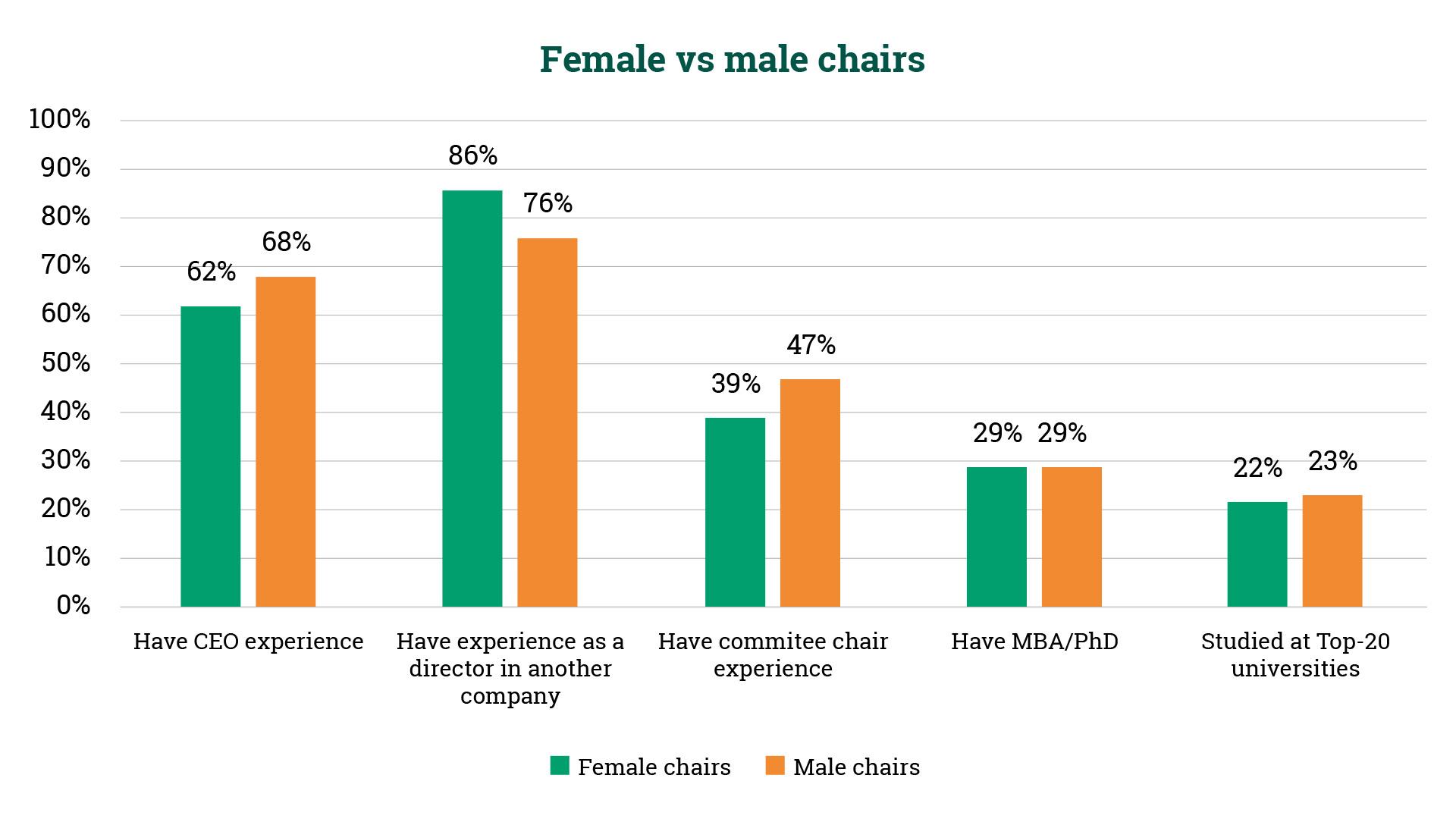 The problem, we concluded, is not that women are discriminated against when it comes to chair appointments; the problem is that there are too few women who possess what is considered the key attribute of a board chair – CEO experience. Among S&P 500 companies, less than 7 percent had a female CEO in 2018.

For the second hypothesis – women are less interested in leading boards than men – we examined the career paths of former CEOs whose tenure occurred between 1994 and 2018 in the US, UK, France and Sweden. Although these are countries with a relatively high percentage of female CEOs and chairs, women still represented only 4 percent of the total sample of former CEOs (73 out of 1,760). Only 46 percent of the female ex-CEOs had become board chairs compared to 80 percent of their male counterparts.

However, different countries have very different dynamics. In the US, a greater number of former CEOs — 14 out of 20 women and 635 out of 662 men — had become the chairs of their companies either during their executive tenures (reflecting the American tradition of combined chair-CEO appointments) or right after leaving the CEO position. In France, where the double appointment is also common but declining, 217 out of 285 male CEOs had become chairs, compared to only eight out of 21 female CEOs. In the UK, where the positions of chair and CEO are usually held by different people, a higher percentage of male CEOs had not become board chairs, but the percentage of women was even lower. In Sweden, the situation was reversed: a slightly higher percentage of female CEOs had become chairs.

It would be a stretch to conclude that women are less willing to become board leaders than men. However, our study does indicate that women CEOs use their executive experience to advance their careers less frequently than men.

The most obvious strategy for increasing the number of female board chairs is to increase the number of female CEOs, since CEO experience is considered an important prerequisite for the chair’s job and some 20 to 50 percent of female CEOs in our sample became board chairs. We believe that augmenting female representation among chief executives is good for business and further research should be conducted to identify the reasons for its current low level (less than 7 percent at S&P 500 companies in 2018). Specific strategies should be developed and implemented at global, national and company levels, and supported with media campaigns. However, as realists, we realise that it will take years to see a significant number of women in the C-suite. After studying effective female chairs in Sweden, the Netherlands, the UK as well as shareholders and companies in other countries, we propose four strategies which could have immediate impact:

Redefine role requirements and nomination practices: Traditionally, CEO experience is the number-one prerequisite for board chair candidates. It does not have to be that way. There is no hard evidence that chairs with CEO experience perform better than those who have not been the chief executive. What our earlier research suggests, however, is that some key attributes of effective chairs – restraint and patience specifically – are not the qualities of a typical CEO. People who select board chairs should prioritise candidates’ competencies over their experience. In the book Leading a Board, based on our research into the work of chairs in nine European countries, we defined five broad attributes that make a chair effective: restraint, patience, availability, specific soft skills (listening, questioning and framing) and specific hard skills (systemic thinking and general business acumen). If decision-makers prioritised these qualities and skills in their selection process, female candidates would stand a better chance.

In the course of our research, we came across a number of effective board leaders (men and women) who had never held the job of CEO but had honed their skills as CFOs, country heads or divisional leaders at large multinational companies. Senior partners from strategy consulting, auditing and legal firms who systematically work with CEOs and board members on complex projects, investment bankers, and senior executives with multi-industry experience usually have high levels of business acumen and systemic thinking. If we include these profiles, the pool of candidates for board chairs becomes significantly larger. In the UK alone, almost 200 women could be added to the pool – there are 44 and 26 female partners in ‘Big 3’ and ‘Big 4’ offices respectively, approximately 100 female senior executives in FTSE 100 companies and 21 female senior partners in ‘Magic Circle’ law firms.

Advertise the female talent pool to decision-makers: Efforts to aggregate and spread information about potential candidates have played an important part in dramatically increasing the number of female directors in France, Norway and the Netherlands. One example is Topvrouwen, a Dutch initiative of Jet Bussemaker, former Minister of Education, Culture and Science, and Hans de Boer, Chair of the Confederation of Netherlands Industry and Employers. This is a database that provides profiles of seasoned female professionals to organisations and executive search agencies.

Another initiative is Accelerating Women Chairman in FTSE Board, launched last year in the UK by a group led by Helen Pitcher, Chairwoman of Advanced Boardroom Excellence, a firmwhich evaluates boards and coaches chairs and CEOs. This initiative aims to discuss a Best Practice guide with stakeholders this year to help boards recruit more women to chair roles. Pitcher and other businesses leaders will work on putting it into practice at the upcoming Balance in Business event in London.

Encourage action at company level: Sweden demonstrates that consistent policy at the shareholder level can bring impressive results. The Swedish state holds significant stakes in seven companies and fully owns 46 enterprises. The government and its advisers nominate board candidates for these organisations, and strives for gender balance at both board and chair levels. As a result, 47 percent of directors and 54 percent of chairs at Swedish state-owned companies are female.

A high-profile task force on female chairs modelled on the UK’s Cadbury committee on corporate governance could provide effective guidance for decision-makers and spur them to elect more female board chairs.

Encourage women to step forward: To help women believe that they can be very good chairs, we need to help them understand what the work of a board leader entails and what makes chairs effective. Twice a year at INSEAD, for example, we run a Leading from the Chair programme with 10–15 women participants. Business schools and other institutions need to develop awareness-building programmes, including developing and communicating stories of role models such as Anne-Marie Couderc (Air France-KLM), Teresa Ko (Freshfields Bruckhaus Deringer), and the late Dame Helen Alexander (UBM plc and Port of London Authority).

Mentoring by experienced board leaders, both men and women, would also bolster female high-fliers’ confidence in chairing boards. Organisations such as Women on Boards or Catalyst show that such relationships not only prepare mentees for chair positions but also expand their networks to become known to decision-makers.

Increasing the number of chairwomen is a challenging goal which will succeed only if all stakeholders work in tandem. Much remains to be done but the results will be worth it.