COVID-19 reminds us of the crucial role nurses play

Nurses today are waging war worldwide against COVID-19, a foe as formidable as any in recorded human history

Globally, nurses are widely credited with the sustained mass immunization campaign which led to the eradication of smallpox, the only human disease ever to achieve that distinction. However, throughout history, there have been many other wars against disease in which nurses have supported similar immunization campaigns: against cholera, diphtheria, measles, mumps and rubella, hepatitis A and B, and H1N1, among many others.

-The WHO has designated 2020 the Year of the Nurse and the Midwife.
-As today, nurses have played crucial frontline roles in pandemics throughout history.
-It’s the right time for the world to recognize the varied and vital work they do.

Nurses today are waging war worldwide against COVID-19, a foe as formidable as any in recorded human history. Under levels of duress more likely to be felt in a battle setting, nurses are staffing hospitals and clinics, pulling long shifts, wrestling with trauma and exhaustion, and putting themselves at risk of infection to care for people in need.

The fact that nurses are the most trusted profession is generally recognized. However, what is often less recognized, and what COVID-19 has brought into sharp view, is the ever-evolving, ever-expanding role of the nurse in the healthcare system—a trend that is accelerating with this pandemic.

“Patients feel that they are listened to when they talk to a nurse, and that they are really cared for — that’s one thing we are able to do at the bedside that physicians often don’t have time to do,” said Emma Mason, a registered nurse who works for MSD (known as Merck & Co in the US and Canada) who is now volunteering in her local hospital, specifically as part of its COVID-19 response. “Right now, visitation is so restricted in hospitals, we’re having to be the bridge that connects the patient to their family.”

It is fitting that in a year in which the important role nurses play has come into sharp focus, the World Health Organization (WHO) has designated 2020 the Year of the Nurse and the Midwife. Nursing is the largest occupational group in the healthcare sector, accounting for roughly 59% of health professionals, according to WHO. But that’s not enough. There are just under 28 million nurses globally, about 5.9 million short of what the world needs to adequately care for the growing population, according to a recent report.

The WHO will join its partners in a year-long celebration that advocates further investment in this workforce, while educating the public about the value nurses bring and the challenging conditions they often face.

Over the years, nurses have contributed to some of the world’s most important public health achievements. They have enlisted and pitched in during any and all major crises, including natural disasters such as hurricanes and floods – and, for that matter, epidemics and pandemics.

Globally, nurses are widely credited with the sustained mass immunization campaign which led to the eradication of smallpox, the only human disease ever to achieve that distinction. However, throughout history, there have been many other wars against disease in which nurses have supported similar immunization campaigns: against cholera, diphtheria, measles, mumps and rubella, hepatitis A and B, and H1N1, among many others.

As with today, what is so notable about nurses is their historical selflessness in their contributions and the care they give. For example, in the series of yellow fever pandemics from the late 1700s through the late 1800s in the US, nurses rushed to the scene to lend a hand, often fatally. Indeed, some US nurses in 1901 volunteered to be deliberately infected with yellow fever, in the end proving that mosquitoes carried the disease and making effective prevention and treatment possible.

That sense of selflessness is embodied in Florence Nightingale, now known as the founder of modern nursing, who was born on 12 May 1820 - making 2020 the 200th anniversary of her birth. She came from a wealthy family and defied all traditions of the time to become a nurse and take care of strangers. During the Crimean War, she went to the frontlines to determine why the majority of soldiers were dying. Through her pioneering use of medical statistics, she was able to uncover that the primary cause of death of soldiers was due to infection resulting from unsanitary conditions. From this, she gained a platform that led to a focus of national attention on the field of public health. 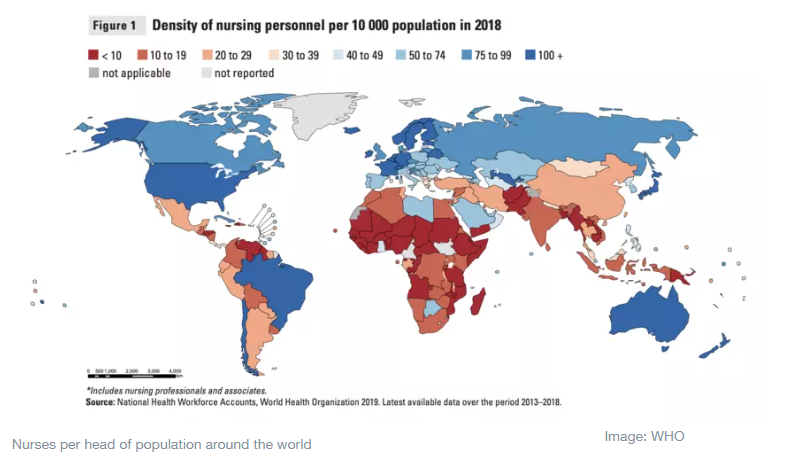 Since Florence Nightingale, nursing has undergone a seismic revolution. Over the last half-century, at an ever-accelerating rate, the profession has evolved, expanded and transformed itself. Nurses play an ever-diversified role, entering specialties such as nurse practitioners and case managers, and in settings such as the operating room, the intensive-care unit and the home.

Nurses have also fanned out in ever-widening circles to assume leadership roles throughout the healthcare industry. They have attained positions as presidents, CEOs and chief clinical officers of health systems, pharmaceutical firms, federal agencies and other institutions, adding their considerable expertise and patient insight to the workings of these organizations.

MSD, for example, employs 450 nurses. Those nurses perform a range of roles, from clinical safety scientists to specialists in clinical quality and compliance and global clinical trial operations, scientific education, marketing and sales, and beyond. Their background in nursing provides a patient-centred lens and a resourcefulness that adds valuable insights to the diverse areas in which they work.

I’m proud that nurses at our company are among those on the frontlines helping to augment the response and lead the charge against the COVID-19 pandemic.

Grappling with the pandemic and all its challenges may be daunting, but our nurses will forge ahead undaunted. So let us salute our nurses in 2020 with all our hearts. We may call this the year of the nurse, but then so is every year—and our support should never waver.