The pandemic will leave the poor further disadvantaged - IMF

Without strenuous and targeted attempts, we are again likely to see an increase in inequality, which was already “one of the most complex and vexing challenges in the global economy,” in the words of the IMF’s Managing Director.

-IMF research shows that the inequality gap between rich and poor has widened after previous epidemics - and COVID-19 will be no different.
-The IMF says policymakers must put in place risk-sharing and social assistance mechanisms to protect the most vulnerable from future economic adversity.

The COVID-19 crisis is now widely seen as the greatest economic calamity since the Great Depression. In January, the IMF expected global income to grow 3 percent; it is now forecast to fall 3 percent, much worse than during the Great Recession of 2008-09. Behind this dire statistic is an even grimmer possibility: if past pandemics are any guide, the toll on poorer and vulnerable segments of society will be several times worse. Indeed, a recent poll of top economists found that the vast majority felt the COVID-19 pandemic will worsen inequality, in part through its disproportionate impact on low-skilled workers.

Our evidence supports concerns about the adverse distributional impacts of pandemics. We find that major epidemics in this century have raised income inequality and hurt employment prospects of those with only a basic education while scarcely affecting employment of people with advanced degrees. 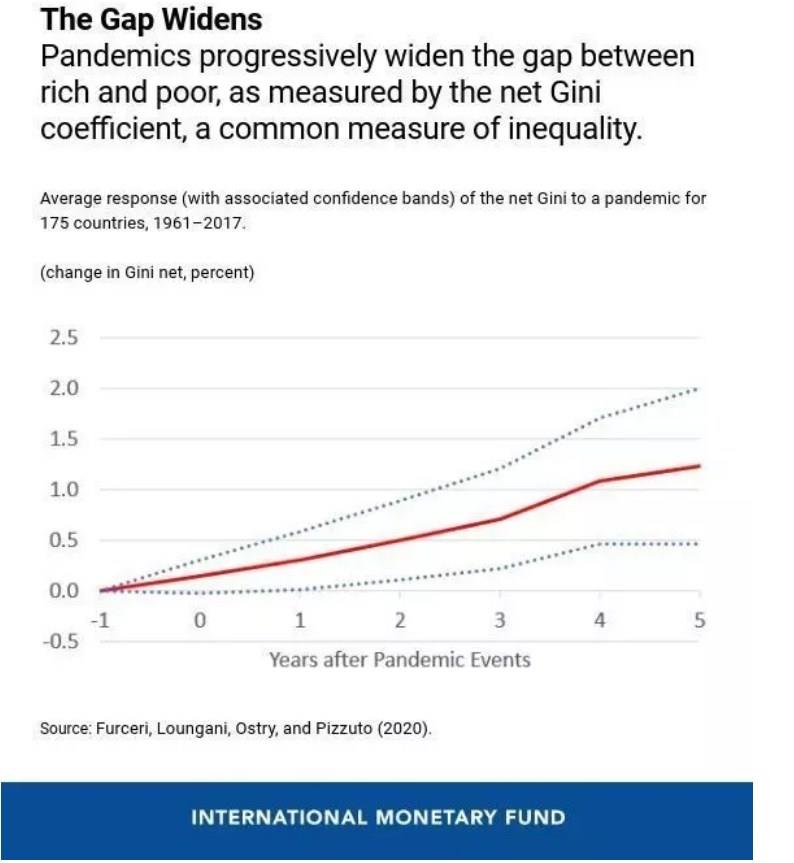 We focus on five major events—SARS (2003), H1N1 (2009), MERS (2012), Ebola (2014) and Zika (2016)—and trace out their distributional effects in the five years following each event. On average, the Gini coefficient—a commonly-used measure of inequality—has increased steadily in the aftermath of these events. Our measure of the Gini is based on net incomes, that is market incomes after taxes and transfers. Our results show that inequality increases despite the efforts of governments to redistribute incomes from the rich to the poor to mitigate the effects of pandemics. After five years, the net Gini has gone up by nearly 1.5 percent, which is a large impact given that this measure moves slowly over time.

While the pandemic is having an adverse effect on almost everyone in society, policies need to pay specific attention to preventing long-term damage (or “scarring”) to the livelihoods of the least advantaged in society. Without strenuous and targeted attempts, we are again likely to see an increase in inequality, which was already “one of the most complex and vexing challenges in the global economy,” in the words of the IMF’s Managing Director.

In concrete terms, what can be done? Access to sick leave, unemployment benefits, and health benefits is useful for all in dealing with the effects of the pandemic but particularly so for poorer segments of society who lack a savings cushion and are thus living hand-to-mouth. Such a “New Deal” is important in sectors of the economy, and in regions, where informal work and self-employment are pervasive and where social protection systems are scant. Expanding social assistance systems, introducing new transfers, boosting public work programs to offer job opportunities, giving financing opportunities to sustain employment, and progressive tax measures (perhaps through a “solidarity surcharge”)—all are likely to be part of the policy mix to take the edge off the devastating distributional consequences from the pandemic.

Policymakers must use the opportunity to make fundamental changes so that when future shocks inevitably occur, including for example from the effects of climate change, societies have in place risk-sharing and social assistance mechanisms that will protect the most vulnerable much better than they do today.