The global COVID-19 quarantine has meant less air pollution in cities and clearer skies. Animals are strolling through public spaces, and sound pollution has diminished, allowing us to hear the birds sing

This finding backs up an earlier report from the International Energy Agency (IEA) which found that CO? emissions from fossil fuel combustion – globally, the main source of greenhouse gas emissions – in the first three months of 2020 were 5% lower compared to the same period last year.

-Restrictions imposed as a result of coronavirus have seen emissions fall.
-They offer an insight into the significant changes that will be needed to bring emissions down to mitigate the worst effects of climate change.
-Long-term action and thinking is needed.

The global COVID-19 quarantine has meant less air pollution in cities and clearer skies. Animals are strolling through public spaces, and sound pollution has diminished, allowing us to hear the birds sing.

But these relatively small and temporary changes should not be mistaken for the COVID-19 pandemic actually helping to fix climate change. Quite the contrary: the pandemic that made the world stop offers a glimpse of the deep changes in lifestyles and economic structures that we need to implement if we are to effectively mitigate the worst of climate change.

The short-term effects are not in doubt. A new study in Nature Climate Change led by scientists from the University of East Anglia and Stanford has found that daily global CO? emissions in early April 2020 were down 17% compared to the mean level of emissions in 2019.

This finding backs up an earlier report from the International Energy Agency (IEA) which found that CO? emissions from fossil fuel combustion – globally, the main source of greenhouse gas emissions – in the first three months of 2020 were 5% lower compared to the same period last year.

But the short-term and long-term effects of pollution are different things, and a few months without driving or flying will do little in the long run. Climate change is caused by rising concentrations of greenhouse gases in the atmosphere. Quarantine measures have affected emissions of these gases in the short term, and many places have seen a drop in air pollution. But these measures were not enough to curb the overall concentration in the atmosphere, which is still increasing. Why? Because molecules of these gases stay in the atmosphere for a long time: methane for around 12 years, for instance, and carbon dioxide for up to 200 years.

Emissions declined, but it won’t last

The new Nature climate change study predicts that if some restrictions are kept throughout the whole of 2020 annual emissions reductions would reach 7.5%. 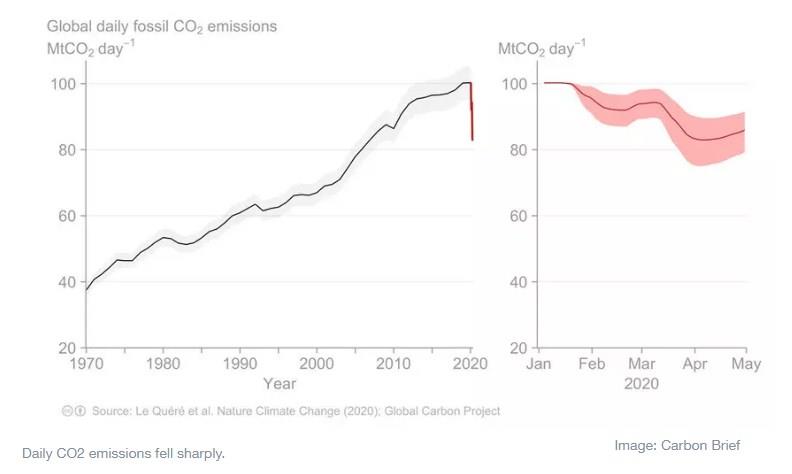 This would, in theory, be great news for the environment, especially if we could maintain it for years to come. After all, in order to meet the Paris Agreement target of limiting global warming to 1.5?, we need to reduce global CO? emissions by 7.6% per year between 2020 and 2030.

But this level of emissions reduction will not last unless economic activity remains depressed. And as lockdowns end and people return to work, emissions will inevitably rise once again – this happens as activity resumes after every economic downturn, including the financial crisis of 2008.

Keeping economic activity depressed to April 2020 levels is not a feasible long-term strategy. But we could use this opportunity productively to steer our societies towards a new paradigm that truly addresses the core issue of the climate conundrum.

We need to restructure our economies

Fossil fuels are the basis of our economies. Our energy systems are built around them and surprisingly little has changed since the first oil shocks in 1973. Back then, coal, oil and gas accounted for 87% of the world’s total primary energy supply, while in 2017 these fossil fuels still accounted for 81%. Over that same period, the total amount of energy supplied more than doubled.

Yes, there is lots of new renewable energy, but this has been deployed alongside fossil fuels, rather than replacing them. All over the globe, there are still plans to build new coal-fired power plants and oil & gas infrastructure. Even countries like Norway, where fossil fuels count for only about 30% of the total energy supply and almost all electricity comes from hydropower, still often rely heavily on fossil fuel profits to fund welfare systems and pension schemes.

If we are to truly progress towards a low carbon economy, we must address the roots of the problem. For instance, how can we encourage further divestment from fossil fuels if the sector is still among the most secure and profitable investments? Or how can we build clean energy systems if we keep subsidising fossil fuels? Despite promises to phase out these tax breaks and other incentives, the richer G20 countries still provided US$127 billion in subsidies to coal, oil and gas in 2017 (remarkably, that figure excludes Saudi Arabia).

And how can we resume activity without “going back to normal”? We need long-term recovery strategies that value nature as the overarching framework within which we all exist, not a mere economic resource. To date, several post-pandemic recovery plans include generous help to the fossil fuel sector with no strings attached.

The pandemic is no climate change panacea. We now know that we can act collectively and adopt measures that significantly curb emissions – in the short term at least. But long-term change does not come about directly as a result of a crisis, but from consistent action changing what caused the crisis in the first place. The COVID-19 pandemic is only a wake-up call: we still have a lot of work to do.

On September 16, Commission President Ursula von der Leyen held her first ‘State of the Union’ before the European Parliament in Brussels

Animal farming in EU worse for climate than all cars

A Checklist for Boards in the New Normal

Covid-19 has spurred corporate boards to improvise new practices while keeping those that have served them well. Here’s a run-down