Gender equity is a lot like climate change. It’s a horizontally-integrated issue that largely exists inside a vertically-integrated policy framework. Now is the time to change that

"By applying the gender lens to climate issues, we begin to see the 83% of single mothers who were unable to return to their homes for two years after Hurricane Katrina hit. Or that two-thirds of jobs lost in the wake of Katrina were those lost by women."

Gender equity is a lot like climate change. It’s a horizontally-integrated issue that largely exists inside a vertically-integrated policy framework. Now is the time to change that.

Siloing today’s most critical matters not only leads to policy blindspots; it also leads to abject policy failures that tarnish the effectiveness of our public, private and civil institutions. Whether you care about gender equity or not, the fact that it is horizontal in nature means that it impacts you – and the issues that matter to you – in one way or another.

Our dominant policy paradigms do not support the level of rigour needed to solve today’s toughest issues such as gender equity and climate change. Mainstream approaches to policy creation instruct us to categorize issues and then neatly box them into policy solutions. While this approach keeps things simple, it also comes with a cost.

In an effort to distill problems into simple and singular forms, we overlook the interconnected, overlapping complexities inherent in our society. And when we strip society of its complexities, we become blind to the symbiotic relationships that connect issues to one another. This, in turn, jeopardizes our efforts to solve problems effectively. The interplay of gender equity and climate change is a fitting example of this phenomenon.

What happens when gender intersects with climate change?

Scientists have well-established a link between climate change and gender equity. Owing to their overrepresentation among the world’s poor and gendered expectations of them, women are more likely than men to:

From this perspective, climate change appears to exacerbate pre-existing gender equity gaps. We would expect, then, that the four critical building blocks of responding to climate change (mitigation, adaptation, technology transfer and financing) include a gender lens. Put another way, we would expect that gender be horizontally-integrated into climate change response efforts.

This is the fulcrum of gender mainstreaming – in other words, the practice of disaggregating the inputs and outputs (that is, qualitative and quantitative data) of public policy by gender. In a male-by-default world, gender mainstreaming gives us direct insight into how society’s rules and regulations impact the 50% of the world’s population that is female.

By applying the gender lens to climate issues, we begin to see the 83% of single mothers who were unable to return to their homes for two years after Hurricane Katrina hit. Or that two-thirds of jobs lost in the wake of Katrina were those lost by women. We begin to see how women and children are 14 times more likely to die or be harmed when disasters strike. We see that among those displaced by climate change, 80% are women.

This horizontal integration of gender allows us to develop a more complete understanding of climate change. Importantly, it allows us to see how issue A escalates issue B.

If we take the concept of horizontal integration a step further, we also find the reverse to be true; the very presence of gender inequity escalates the threat of climate change.

Countries with higher levels of women in politics have been the most successful in reducing carbon dioxide emissions. Moreover, a study of 130 countries reveals that women in government positions are more likely to sign international treaties on climate resolutions than their male colleagues. Further research shows that countries with high levels of gender inequity also have high levels of environmental degradation.

We are sitting atop mountains of evidence that demonstrate the positive correlation between gender equity and environmental wellbeing. Yet we aren’t doing a great job of applying this to policy creation. For example, women are still an untapped resource in our response to climate change.

Where are all the women? Still not at the table

To effectively, efficiently, and sustainably respond to a changing climate, we need to bring everyone to the table. But that’s not happening. Consider the World Economic Forum’s Global Gender Gap Report, which measures gender equity across four subindexes: 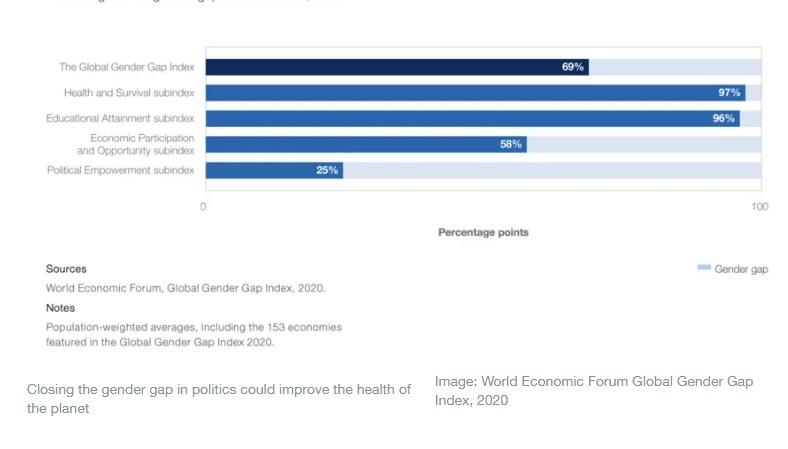 While countries have made commendable progress in areas such as educational attainment (where 96.1% of the gender gap is closed) and health (where 95.7% of the gender gap is closed), no country has fully closed their political empowerment gap. To date, only 24.7% of the global political empowerment gap has been closed. Of the 153 countries examined in the report, women hold 25% of parliamentary seats and only 21% of public ministers’ roles. Worse, 85 of the 153 countries surveyed have not had a woman as their head of state over the past five decades.

For the sake of our planet, it’s time we closed these political empowerment gaps. Response efforts need the perspective, lived experience and knowledge that women bring to the table. The intellectual assets that women hold play a large role in ensuring policies are horizontally-integrated with gender – something that’s largely not happening right now. At a recent UN Security Council meeting, only five out of 75 member states said gender was an important consideration in our response to climate-related risks.

A paradigm for a new normal

With COVID-19 further deepening the effects of gender and environmental inequities, the time is now to adapt our policy frameworks to support horizontal integration. The Great Reset of 2020 provides new entry points for women to partake in policy ideation, creation and evaluation. As the data shows, women are proving to be remarkably effective leaders in combating the challenges of the 21st century. Gender equity, like climate change, is an “everyone’s” issue. So let’s start viewing issues through the lens of gender and make this world a better place for all.