Bill Gates: How HIV/AIDS prepared us to tackle COVID-19

Around 2 million people a year used to die from HIV/AIDS. Now that figure has more than halved. So what changed?

Bill Gates thinks lessons from the AIDS fight can help defeat COVID-19, in particular teaching us about building “large, fair, global distribution systems”. But he says AIDS treatment programmes can actually benefit too.

Around 2 million people a year used to die from HIV/AIDS. Now that figure has more than halved. So what changed?

Bill Gates is clear: the Global Fund – a worldwide philanthropic effort that spends more than $4 billion a year on fighting AIDS, as well as tuberculosis and malaria – was set up.

It’s why Gates, the co-chair of the Bill & Melinda Gates Foundation, told an International AIDS Society conference that he “remains optimistic” that COVID-19 can be defeated – because there is already a successful model for getting on top of pandemics.

However, Gates warns against letting vaccines go to “the highest bidder”, an outcome he says will cause a “longer, more unjust, deadlier pandemic”. 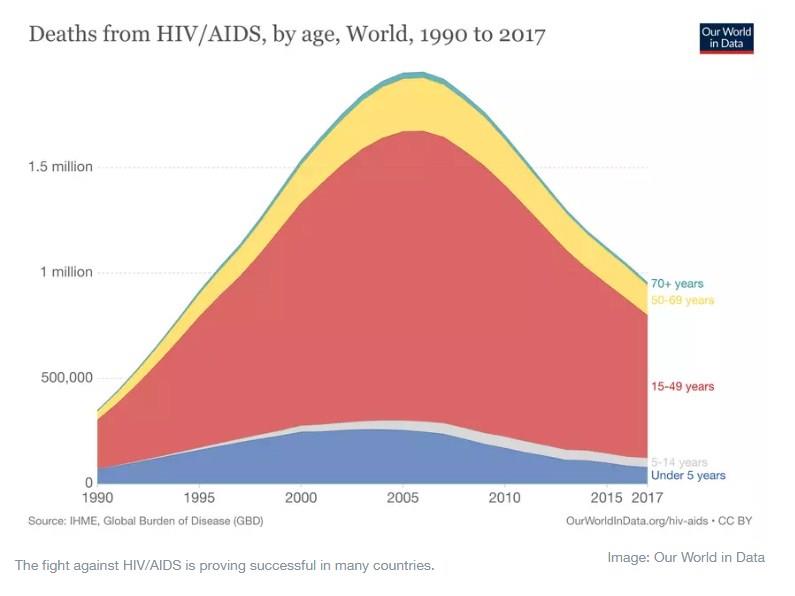 Bill Gates thinks lessons from the AIDS fight can help defeat COVID-19, in particular teaching us about building “large, fair, global distribution systems”. But he says AIDS treatment programmes can actually benefit too.

“Better diagnostic tools are being developed to help identify these [coronavirus] infections. Investments are being made in libraries of antiviral drugs. Also we’re making great progress on vaccines.”

More than 20 vaccines are currently undergoing clinical trials according to the World Health Organization (WHO), with well-advanced studies in the UK and US showing encouraging results.

“These platforms won’t just be useful against this particular virus,” Gates says. “They will also help us specifically for HIV.”

Yet Gates doesn’t downplay the challenges that the global vaccination movement faces – particular from disruption to existing programmes.

In recent months, UNICEF has warned that more than 117 million children globally could miss out on measles vaccinations due to the suspension of immunization programmes. Meanwhile, the WHO cautions that malaria deaths in sub-Saharan Africa could double to 769,000.

And then there’s money. “If we just let drugs and vaccines go to the highest bidder, instead of to the people and the places where they are most needed, we’ll have a longer, more unjust, deadlier pandemic,” Gates says.

“We need leaders to make these hard decisions about distributing based on equity, not just on market-driven factors.”

But Gates’ overall message to AIDS campaigners – and the wider world – is one of hope. “The world has come together. Specifically, you have done it before.”