Rising CO2 levels could have ’very severe’ global impact, according to the latest research

At the dawn of the industrial revolution, the Earth’s atmosphere contained 278 parts of CO2 per million

Today, after more than two and a half centuries of fossil fuel use, that figure is around 414 parts per million (ppm).

At the dawn of the industrial revolution, the Earth’s atmosphere contained 278 parts of CO2 per million. Today, after more than two and a half centuries of fossil fuel use, that figure is around 414 parts per million (ppm). If the build-up of CO2 continues at current rates, by 2060 it will have passed 560 ppm – more than double the level of pre-industrial times.

Exactly how the climate will respond to all this extra CO2 is one of the central questions in climate science. Just how much will the climate actually change?

A major new international assessment of the Earth’s climate sensitivity, now published in the journal Reviews of Geophysics, addresses this question. This research has improved our understanding of how much the world will eventually warm if the carbon dioxide in the atmosphere is maintained at double the level of pre-industrial times.

While an exact figure is still not possible, low levels of warming are now found to be far less likely than previously thought. Very high values are slightly less likely too. There is much greater certainty that, if left unchecked, global warming would be high enough to bring very severe impacts and risks worldwide.

The study, which was organised by the World Climate Research Programme (WCRP) and involving many leading climate scientists (including one of us: Tim), looks at a measure called “equilibrium climate sensitivity”. This refers to how much global average temperatures will increase by in the long-term following a doubling of carbon dioxide concentrations. It can be estimated using three main lines of evidence:

-Temperature measurements made with thermometers from 1850 (when enough global coverage began) to the near present. By comparing temperatures, CO2 levels and the effect of other climate drivers in the past and present, we can estimate the longer-term changes.
-Evidence from paleoclimate records from the peak of the last ice age 20,000 years ago, when CO2 was lower than now, and a warm period around 4 million years ago when CO2 was more comparable to today. We can tell how warm the climate was and how much CO2 there was in the atmosphere based on the make-up of gases trapped in air bubbles in ancient ice cores.
-Present-day observations – for instance from satellite data – and evidence from climate models, theory and detailed process models that examine the physics of interactions within the climate system.

Despite its importance, equilibrium climate sensitivity is very uncertain and for many years the standard estimate has been 1.5°C to 4.5°C. In its 5th Assessment Report, the Intergovernmental Panel on Climate Change (IPCC) gave these values as the “likely range”, which meant it considered there was at least a 66% chance that it fell within this range. Or, in other words, it judged there was up to a 33% chance that warming would either be less than 1.5°C or more than 4.5°C.

The new study suggests that this “likely range” has narrowed to, at most, 2.3°C to 4.5°C – or possibly an even narrower range*. The lower end of the range has therefore risen substantially, meaning that scientists are now much more confident that global warming will not be small. 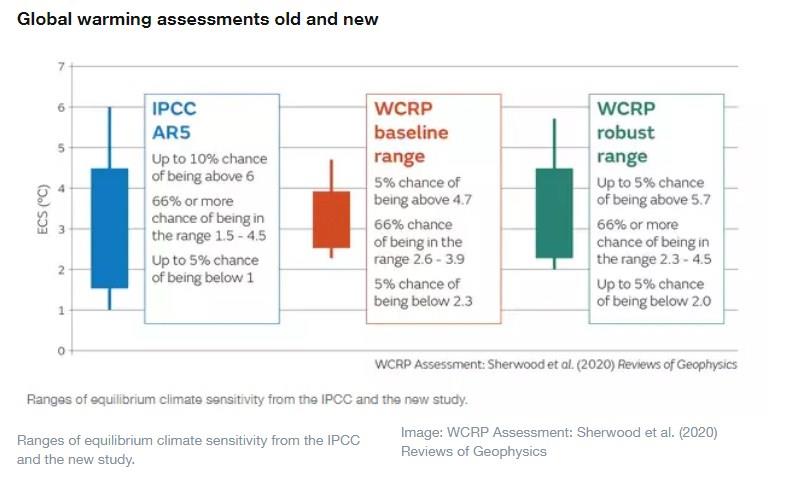 We won’t be saved by low sensitivity

An important implication is that humans would be taking an even bigger risk than previously thought if we relied on low climate sensitivity to allow us to meet the Paris Agreement target of keeping global temperatures to “well below” 2°C above pre-industrial levels, and to “pursue efforts” to limit warming to 1.5°C. This is therefore further confirmation that CO2 emissions need to be rapidly reduced and ultimately reach net zero if the Paris targets are to have a good chance of being met.

According to the study, if CO2 does reach double the pre-industrial level and stays there (or to be precise, if the total effect of all human impact on greenhouse gases and other climate drivers reaches an equivalent level), then there is up to an 18% chance that temperatures will rise to 4.5°C above pre-industrial levels, and a no more than 5% chance that they will go above 5.7°C. This has important implications for climate change risk assessments. In a risk assessment, it is normal to consider outcomes that are possible even if they are not the most likely.

The latest climate models have a wide range of climate sensitivities, with our own Met Office models at the high end. This happens because climate sensitivity is not something that scientists input to the models, but rather it emerges from the same complex interactions the models simulate.

This diversity of models lets us understand the regional changes in climate and extreme weather associated with different climate sensitivities, and assess their potential impacts. This includes the high sensitivities that are less likely but still possible. At the other end of the range, seeing the minimum changes we can expect will help inform climate change adaptation measures.

The new study allows a key aspect of climate models, their climate sensitivity, to be seen in the context of other evidence. While there is still more to be done to assess more precisely how the global climate will respond to further increases in greenhouse gases, these advances provide a much more solid base of evidence on which climate change policy can be further developed.