The global economy won’t return to pre-pandemic levels for another two years, according to the Organisation for Economic Co-operation and Development (OECD)

The economies of the 37 developed nations that make up the organization shrank an unprecedented 9.8% during April, May and June due to the impact of COVID-19.

The global economy won’t return to pre-pandemic levels for another two years, according to the Organisation for Economic Co-operation and Development (OECD).

The economies of the 37 developed nations that make up the organization shrank an unprecedented 9.8% during April, May and June due to the impact of COVID-19.

And the path to recovery is highly uncertain and vulnerable to a second wave of infections.

Global economic activity is expected to shrink by 6% overall in 2020 if a second wave is avoided, although this could be a sharper decline of 7.6% if it hits before the end of the year. 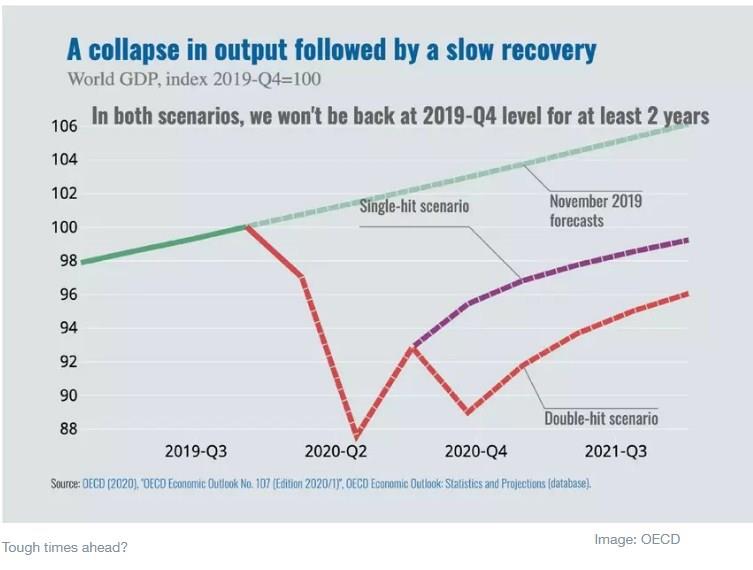 Although the lockdown measures brought in by many governments have succeeded in slowing the spread of the virus, they have also limited business activity and taken a very heavy toll on the health of economies around the world.

The OECD’s Secretary-General Angel Gurria has taken part in the Great Dialogue Series - part of the World Economic Forum’s Global Reset Initiative - to share his thoughts about how to help the global economy recover.

From paying private-sector wages to deep fiscal stimulus, many governments have acted quickly and decisively to protect the economy.

Gurria said it was important not to withdraw this support prematurely, highlighting the negative impact when this was done previously.

"Remember the big mistake we made in 2008/9? We withdrew the stimulus too fast. We went into austerity too fast. And what happened is we went into two further downturns of the world economy after that because we were too fast. We should not make the same mistake this time," he warned.

He also said that deciding whether to prioritise protecting people’s lives or their livelihoods was a "false dilemma".

It’s necessary to invest heavily in controlling the virus. And if we don’t do that, the economic cost will be even greater, he explained.

2. Reskill the most vulnerable workers

There has already been a huge surge in unemployment, with the rate rising to 19% in Spain, 17.5% in the US and an average of 11.4% among OECD member countries during the second quarter.

The lowest skilled workers are most vulnerable and could risk losing their links with the jobs market more permanently, Gurria said.

"That is going to have a very serious result because they are more difficult to catch up in terms of skilling," he warned.

If this reskilling issue is not adequately addressed, it could lead to discontent on the streets and increase political pressure, he added.

Global supply chains were vulnerable to the coronavirus outbreak in China, especially when urgent supplies of PPE were needed.

But Gurria warned against action that would lead to more manufacturing ending up closer to the end market, or a reduction of international trade in general.

"Don’t shorten the value chains. Diversify the value chains - because otherwise we run the danger of getting less efficiency throughout," he warned, stressing the importance of global trade to the global economic recovery.