Which countries are making the most progress in digital competitiveness?

We are in the middle of a technological revolution in which artificial intelligence, 3D printing, virtual reality and other technologies are converging

"Across the globe, digital incumbents face new and dynamic competitors. Within the G7, France was able to advance most in its relative digital competitiveness between 2017 and 2019, which makes the country our top Digital Riser in this group; conversely, Italy and Germany decreased the most within the G7."

by Philip Meissner and Christian Poensgen*

We are in the middle of a technological revolution in which artificial intelligence, 3D printing, virtual reality and other technologies are converging. This will affect every industry and every economy around the globe. A country’s ability to navigate these changes and to build competitiveness around these digital technologies will not only determine its future wealth but also its geopolitical position.

Across the globe, digital incumbents face new and dynamic competitors. Within the G7, France was able to advance most in its relative digital competitiveness between 2017 and 2019, which makes the country our top Digital Riser in this group; conversely, Italy and Germany decreased the most within the G7.

Within the G20, the ranking reveals interesting patterns in regards to the two global digital superpowers: China and the USA. It shows that China has gained significantly in digital competitiveness, while the US fell over the same time period, mainly due to a decrease in attractiveness for international talent. The top three Digital Risers in the G20 are Saudi Arabia, France and Indonesia. India, Italy and Germany have come in last. 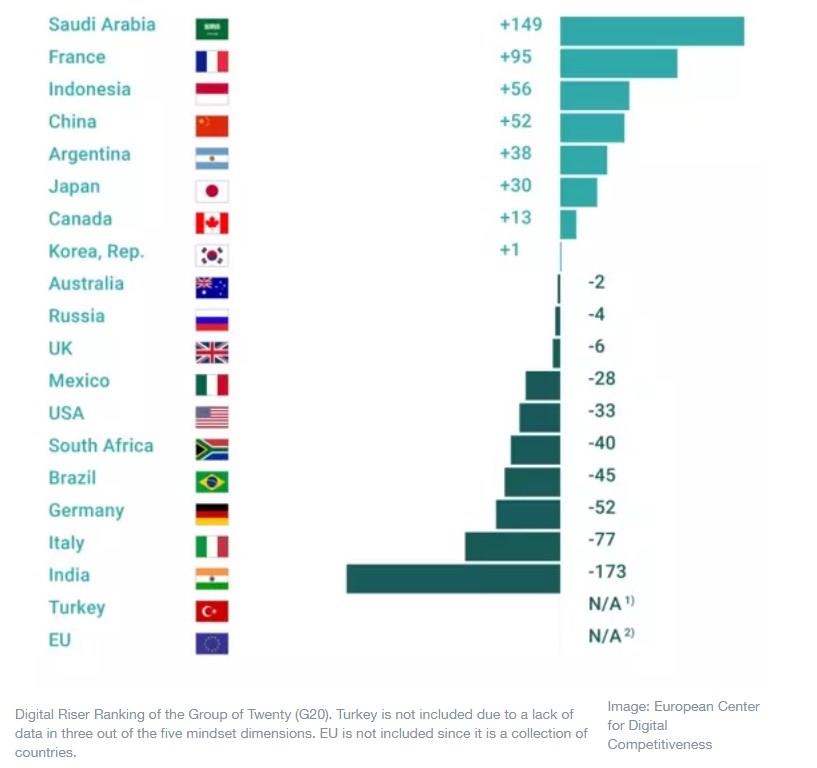 The report also measures the two core dimensions of digital competitiveness, a country’s ecosystem and its mindset. These are based on five items from the World Economic Forum’s Global Competitiveness Report, which analyses the progress of 140 countries along the mindset and ecosystem dimensions as well as the absolute, accumulated change in ranks between 2017 and 2019.

Aside from the ranking itself, we also analysed the policies that the top Digital Risers countries have followed. This analysis shows that all Digital Risers have certain things in common that other governments can learn from when they design their country’s digital strategy. The report includes detailed overviews of each of the top three Digital Risers in every region. Here is a summary of the best practices they share:

Indonesia and the Dominican Republic, for example, have invested significantly in digital education. Indonesia, for example, has started a digital talent scholarship programme to provide certifications to 20,000 people. The Dominican Republic, meanwhile, has started the ’One Computer’ initiative to give every child access to a laptop at school. Other success factors of Digital Risers include their ability to attract international talent. The Philippines - with its start-up visa programme - and Indonesia, France and Latvia are the success stories here. Also, Digital Risers have made it easy, quick and cheap to start companies. Azerbaijan, for instance, reduced the time to start a company from over 3 days to less than 1 day, while Latvia has introduced a special tax and funding regimes to support young companies.

2) The top Digital Risers have followed comprehensive, swiftly-implemented plans along a long-term vision

Start-ups were a key focus area of Digital Risers. Their growth has been supported with large scale initiatives like the J-Startup Program in Japan or the 1000 startups movement in Indonesia. France, for example, has set up a new 5 billion Euro fund, while Armenia supports start-ups with up to 50,000 euros.

Our report shows that while some countries are advancing quickly in digital technologies, others are losing ground. Countries like the USA, Sweden and Singapore are often perceived as digital champions, but our results indicate that they are not necessarily dynamic digital risers. Only Singapore improved their relative position slightly over the last three years. In contrast, the USA and Sweden actually lost ground during the same time. This highlights that digital competitiveness develops in a dynamic fashion and that with the right policies, new digital champions can emerge around the globe.

Thursday last week, the Folketing (the Danish Parliament) passed a law that makes possible to send asylum seekers to a country outside the European Union, where their application will be assessed

Differing views within the European Commission on how the EU’s unprecedented recovery fund can be spent, and a rush to translate national spending plans from their original language, risk slowing down the EU’s building renovation wave, experts say

The New Normal for Innovation

Once a reliable route to competitive advantage, innovation has become a survival skill