EU transport ministers pledged to give more attention to international rail freight and consider plans to relaunch the Trans-Europ Express network, during a meeting of minds on Monday (21 September)

Eight routes already under consideration include Paris-Brussels-Cologne-Berlin-Warsaw, Amsterdam-Cologne-Basel-Milan-Rome and Berlin-Frankfurt-Lyon-Montpellier-Barcelona, as well as services linking Scandinavia to the rest of Europe.

by By Sam Morgan

EU transport ministers pledged to give more attention to international rail freight and consider plans to relaunch the Trans-Europ Express network, during a meeting of minds on Monday (21 September).

How to develop Europe’s rail networks – both passenger and freight – and make trains more competitive with short-haul aviation were among the talking points of the virtual meet-up, chaired by Germany’s presidency of the EU Council.

A proposal penned by the German government aims to relaunch the hugely popular Trans-Europ Express (TEE) services by 2025 and Berlin is confident that a new spirit of cross-border cooperation on mobility and climate policies will make the plan a reality.

The original TEE network was made up of an alliance of rail operators from France, Italy, the Netherlands, Spain, Switzerland, West Germany and more, reaching its peak service in 1974.

It allowed first-class passengers to avoid the Autobahn, ‘rendezvous on the Champs-Elysee’ and reach Vienna, where they could ‘sit at a late-night cafe’.

But with the advent of home-grown domestic high-speed services, such as France’s TGV in the early 1980s, the TEE entered a period of decline and by the 1990s largely ceased to operate.

Eight routes already under consideration include Paris-Brussels-Cologne-Berlin-Warsaw, Amsterdam-Cologne-Basel-Milan-Rome and Berlin-Frankfurt-Lyon-Montpellier-Barcelona, as well as services linking Scandinavia to the rest of Europe. 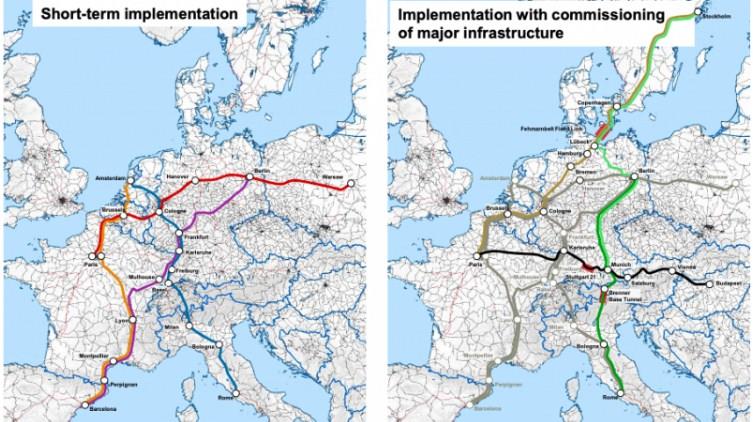 The most ambitious phase of the planned rollout of new services will be dependent on the completion of large-scale construction works, including the Brenner Base Tunnel under the Alps and the Fehmarn Belt Fixed Link between Germany and Denmark.

Scheuer said during the meeting that countries will need to sit down and identify where “inadequate rail services” exist currently and that national routes will be chained together in order to build international services.

Those aspirations tally with a declaration signed by 25 transport ministers in June that aims to boost the market competitiveness of train journeys of up to 800km. The pledge says they will build an “agenda for international passenger rail transport” by mid-2021.

TEE 2.0 would also be complemented by a night-train network, serving many of the same routes and building on the budding renaissance overnight services are enjoying. However, the plan does acknowledge that “their economic challenge is not to be underestimated”.

Plenty of obstacles stand in the way of Scheuer’s TEE redux, including a patchwork of pricing systems, different languages and operating criteria, seat reservation rules and the inherent weaknesses of existing passenger rights legislation.

EU negotiators are due to have another crack at brokering an agreement on an update to the rules, which stalled under the Croatian EU presidency earlier this year, although doubts remain about whether the 1 October talks will yield a compromise.

The German plan aims to get around that by suggesting that partnerships between different companies would be spun off into their own entities, booking track access from parent firms and using existing rolling stock until tailor-made trains can be purchased.

Alliances are not uncommon but are difficult to organise. High-speed operators Eurostar and Thalys have agreed to merge, while Austrian railways has leveraged its good contacts with other firms to establish itself as the number one night-train operator in Europe.

All aboard the freight train

The ministers also agreed to focus more on international freight services and acknowledged that cargo corridors have been “very effective in developing common measures facilitating the enhancement of the resilience of rail freight in the event of major crises”.

According to a declaration, “a level playing field among all transport modes” is necessary if the EU is to meet its climate targets and unlock the potential of the Green Deal. Shifting cargo from road to rail has long been identified as an emissions-busting measure.

The text also cites better cooperation between network managers to free up track capacity, noise reduction measures – which are crucial for building public acceptance of greater freight volumes – and automatic wagon decoupling systems as crucial pieces of the puzzle.

Next year is on track to be the ‘European Year of Rail’ under plans first unveiled by the European Commission in March.

Europe Must Grow Up and Stop Moaning About Trump

No matter who sits in the White House come January 2021, Europe must grow up and take responsibility to rebuild multilateralism, fix the transatlantic relationship, and revive arms control