We need to replace the world’s most potent greenhouse gas

On World Earth Day, as our fellow citizens of the world pledge to undertake a brilliant array of earth-restoring actions, from trash hacking to “plogging” (picking up litter while jogging), it’s time to fix our sights once more on a hidden climate threat

"Sulfur hexafluoride is 23,500 times more powerful than CO2 as a greenhouse gas."

On World Earth Day, as our fellow citizens of the world pledge to undertake a brilliant array of earth-restoring actions, from trash hacking to “plogging” (picking up litter while jogging), it’s time to fix our sights once more on a hidden climate threat: sulfur hexafluoride (SF6), the world’s most potent greenhouse gas.

SF6 is a manmade gas with a global warming potential (GWP) 23,500 times greater than CO2, and a lifespan of 3,200 years in the atmosphere. Every new particle we leak is there to stay, a thick atmospheric blanket warming the earth for more than 100 generations. Let today be the day we pledge to innovate, collaborate and legislate to replace SF6 with climate-friendly alternatives in our electricity-distribution networks.

In 2014, the EU tried to phase out SF6, but at the time no viable alternative existed for the most essential switchgear equipment that prevents outages in our electricity grids. As the SF6 leakage from those systems – estimated between 0.1% for new equipment and up to 3% for old equipment – also seemed negligible next to CO2 emissions, the issue was put on the back-burner.

In the meantime, the rapid proliferation of digital technology and electrification to support the energy transition has only increased our global dependence on electricity, with a projected 50% increase in global demand from 2020 to 2050.

To support that growth, we need new electricity distribution systems - and that will amount to a forecasted 75% growth in newly installed SF6 switchgear. Considering those systems have a lifespan of 30 to 40 years, the situation demands renewed focus. SF6 might not be the biggest contributor to global warming, but as the most potent GHG, and the only gas that cannot be eradicated from the atmosphere, it deserves another look.

We have all witnessed the incredible advances in science made possible through open innovation and collaboration. From the multi-country Human Genome Project, which mapped the human genome under budget and two years ahead of schedule, to the data sharing that has led to the extraordinary development of multiple COVID-19 vaccines in under a year, the power of collaboration to discover and disseminate life-changing solutions is awesome.

Since 2014, several climate-friendly SF6 replacements have emerged, including a gas mixture with a GWP of less than one. My company has made this gas open-patent, so that any medium-voltage switchgear manufacturer can create and use it for free. In the energy sector, it’s also time to collaborate, and to use open technology to bring the moving target of the energy transition in full view for the first time. It’s now very clear: we can win the climate race, but only if we work together.

Given existing SF6 replacements and those in development, by 2025 we expect to see an alternative for every kind of electricity distribution. In purely logistical terms, it would be relatively simple to replace the SF6 in switchgear in businesses, the electric transportation infrastructure, solar energy systems, and even factories.

Power substations will of course be much more challenging, and it is here that strategic and coordinated intervention is needed. It is no small task to convert existing infrastructure; it’s like trying to rebuild a house with people living inside. In Germany, for example, with a tightly networked landscape of 880 substations – 75 of which serve more than 100,000 people – we cannot force a conversion of existing equipment, but we should have a plan in place to ensure that all new equipment uses SF6 replacements. As the graph below shows, even if we start now, it will be 2090 before we stop leaking SF6 from electricity networks. 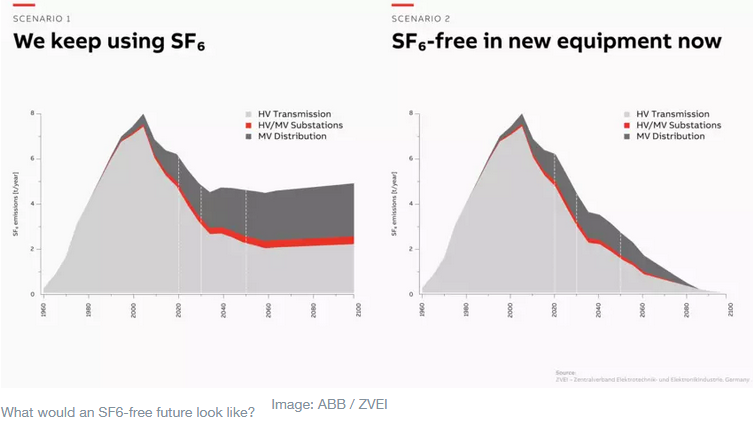 However, it isn’t only the logistics, but the cost, that we need to address together. Putting SF6-replacements in all new installations will require investment. Authorities could help by employing a number of regulatory mechanisms, like subsidies or tax breaks, to make a swift, climate-friendly conversion possible.

As a technologist, and as a world citizen, I am bringing this issue to light once again, because we now have the solutions for it. Now is the moment to set a deadline for replacing the SF6 used for electricity distribution, not just in the EU and California, where legislation hangs in the balance, but globally.