Nearly two years after the European Commission launched the European Green Deal in December 2019, the EU’s landscape has changed greatly, with the COVID-19 pandemic causing a contraction of the bloc’s GDP by 6.1% in 2020

"The European Green Deal is to play an important role in the region’s COVID-19 recovery."

Nearly two years after the European Commission launched the European Green Deal in December 2019, the EU’s landscape has changed greatly, with the COVID-19 pandemic causing a contraction of the bloc’s GDP by 6.1% in 2020. Yet as countries continue their vaccination campaigns and focus on economic recovery, there’s hope that the region can rebound. The IMF projects that the Europe’s GDP could return to pre-pandemic levels by 2022.

The European Green Deal has the potential to play a key role not only in ensuring this recovery in the short term but also in addressing long-term climate change threats. The launch of the "Fit for 55" package this week is expected to mark an important step in overhauling climate policies and enabling the EU to deliver on its commitment to reduce emissions by 55% by 2030.

Here’s a look at the deal, what it has achieved so far and what to expect next.

What are the areas of focus?

The deal aims to achieve three main goals. First, it focuses on achieving net-zero emissions by proposing specific strategies that can help curb emissions across all sectors, with a strong focus on energy, which makes up more than 75% of total EU-27’s greenhouses gas. The objective is to increase the share of renewable energy in the EU’s energy mix.

Second, it plans to decouple growth from resource exploitation. While reductions in emissions have been achieved in the last decade, Europe remains one of the major contributors of resource consumption in the world. Described as a “generation-defining task,” achieving this objective will not only require a boost in technological advancements but also rethinking lifestyles, communities, and societies.

Third is the need to foster an inclusive green transition and to leave none behind, supported through the Just Transition Mechanism, which will provide between 65€ and 75€ billion over the period of 2021-2027 to alleviate the socio-economic impacts of the transition. 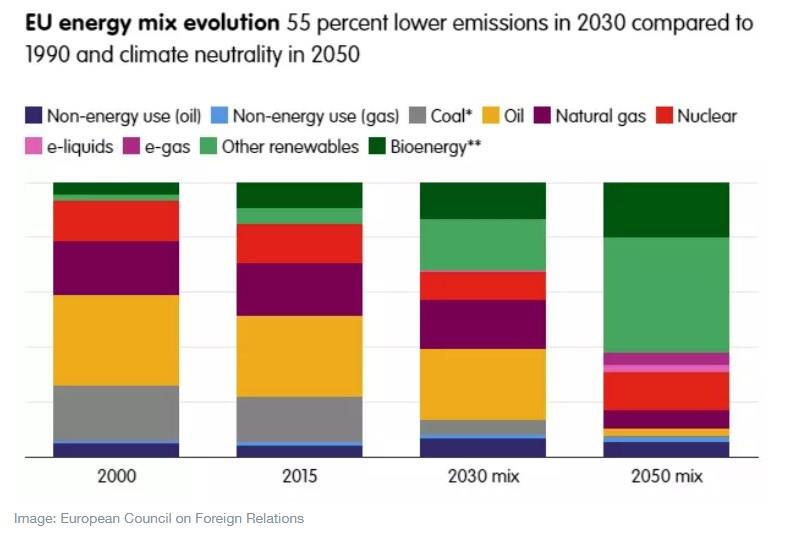 How is it financed?

The European Commission has envisaged the need for 1 trillion euros of investments, with half coming from the EU budget and EU Emission Trading Scheme and half from Invest EU. The funds will directly support sustainable investments, create the enabling framework to encourage such investments from both the private and public sectors, and help public administrations in identifying, structuring, and executing green investments.

What has it achieved so far?

-the European Climate Law, which has made the EU’s 55% emissions reduction targets legally binding for member states;
-the EU Renovation Wave, which envisages the overhaul by 2050 of 220 million buildings, to increase their environmental performances while generating costs savings for households;
-the EU Code of Conduct on Responsible Food Business and Marketing Practices, signed by 65 organizations to increase the availability and affordability of healthy and sustainable food options;
-the EU Action Plan Towards Zero Pollution for Air, Water and Soil, which aims to reduce premature deaths due to air pollution by 55%, plastic litter in the sea by 50% and residual municipal waste by 50%, among other changes by 2030; and
-the EU strategy on Adaptation and Climate Change, whose objective is to reinforce the adaptive capacity of the EU and minimize vulnerability to climate change.

The “Fit for 55” package, which includes new policies and regulations, is expected to be launched on 14 July and to cover areas including renewables, energy efficiency, building, land use and emissions trading schemes. The package is expected to contain both revisions of existing laws (such as the amendments for the energy taxation directive and the regulation for the CO2 emissions for cars and vans) and the proposal of new legislations (such as the EU Forest Strategy and the ReFuelEUAviation))

The “Fit for 55” package is expected to define new targets for the EU energy mix by 2030 and make the directive legally binding to achieve 32.5% energy savings by 2030. Finally, the package will also provide more detail on the Emission Trading Scheme and the Carbon Border Adjustment Mechanism.

What else needs to be done?

The EU Next Generation Fund requirement to devote at least 37% of all national recovery and resilience plans to climate-positive initiatives represents a unique opportunity for governments to ensure a green recovery.

As the focus in the coming years must be on translating the European Green Deal into concrete initiatives, private sector leaders could become real agents of change for the bloc’s green transition. The World Economic Forum’s community of the CEO Action Group for the European Green Deal serves as a platform for business leaders to support concrete plans and promote sustainable practices through lighthouse projects, a series of action-oriented and cross-sectoral initiatives aimed to tackle decarbonization in sectors as varied as food and agriculture, real estate, infrastructure and skills

Consumers are also increasingly stepping up. According a recent survey, more than 70% of EU citizens expect their national governments and the EU to ramp up positive climate actions, and 96% said they would take one personal specific action to help reduce carbon emissions, be it recycling waste, reducing consumption of disposable items or changing dietary habits.

During her Special Address at the World Economic Forum Annual Meeting 2020, President of the European Commission Ursula Von Der Leyen, defined the European Green Deal as “Europe’s man on the moon moment.” The region has an important opportunity and obligation to come together to create sustainable, inclusive growth for current and future generations.