World hunger surged in 2020, with 1 in 10 people on Earth undernourished

Nearly 10% of everyone on Earth – an estimated 768 million of us – were undernourished in 2020 as the COVID-19 pandemic disrupted economies, job markets and supply chains and inflated food prices

10% of the world’s population were undernourished in 2020.

Nearly 10% of everyone on Earth – an estimated 768 million of us – were undernourished in 2020 as the COVID-19 pandemic disrupted economies, job markets and supply chains and inflated food prices. According to the latest edition of an annual food security report from the United Nations, the total sharply increased by an additional 118 million people from 2019, when 8.4% of the world’s population was undernourished.

People who are undernourished are chronically hungry, meaning they don’t have enough to eat for a normal, healthy and active life for a period of at least a year. This condition is particularly severe for children, with repercussions that can become permanent.

Undernourishment was the most prevalent and grew the fastest in low-income nations, such as Yemen, the Democratic Republic of the Congo and Burundi. Very few people in wealthier places like Germany, Canada and Australia meet the U.N. Food and Agriculture Organizaton’s criteria for undernourishment.

Many years of progress in reducing this problem around the globe had already faltered, starting in 2014. Unfortunately, in addition to lingering economic problems caused by the coronavirus pandemic, famine now looms in many places. As a result, prospects for a full economic rebound in the world’s poorest countries remained weak as of the summer of 2021. 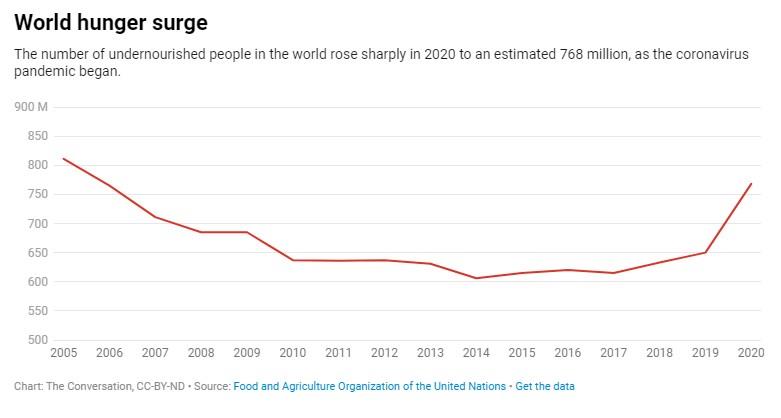 Even more people are experiencing moderate or severe food insecurity, meaning that they do not consistently have access to the food they need every day.

People who experience hunger for several years as children are more likely to die before reaching maturity. Those who survive may face many health and cognitive disadvantages that continue throughout their lives.

That’s because when children get inadequate nutrition, they may be described as “stunted,” meaning their brains and bodies do not grow to their full potential. Stunting can affect someone’s ability to pay attention, multitask and regulate their mood. Reducing the prevalence of hunger around the world among children is an especially urgent priority because, unfortunately, the possibility of recovering from nutritional deficits decreases over time.

Hunger has many causes, including conflict, poverty and climate change.

The International Labor Organization estimates that workers around the world lost the equivalent of roughly 255 million full-time jobs in 2020, making the economic impact of the pandemic much greater than the shocks caused by the 2009 financial crisis.

Yet, because hunger was increasing before 2020, simply ending the coronavirus pandemic isn’t likely to reverse this trend.

Conflict and poverty continue to afflict nations across the globe, particularly in Africa and Asia.

What’s more, as the effects of climate change increase, crops that are sensitive to heat and extreme weather events will surely take a hit. Without adequate measures to decrease the pace of climate change and adapt to the damage already done, I fear that it could grow even harder to sharply reduce the number of people who don’t get enough to eat.

*Assistant Professor of Social and Environmental Challenges, The University of Texas at San Antonio
**first published in: www.weforum.org

EU employment aid for workers in France and Greece

Are ’decentralized autonomous organizations’ the business structures of the future?