Home or office? Survey shows opinions about work after COVID-19

"Two-thirds of people around the world want to work flexibly when the COVID-19 pandemic is over, a new survey shows."

There have been many predictions that the COVID-19 pandemic would permanently change the world of work. According to a new global survey, that’s just what has happened, with a majority of people across the world saying they want to keep working flexibly from home.

An Ipsos survey for the World Economic Forum among 12,500 employed people in 29 countries found that a majority want flexible working to become the norm. And almost a third (30%) said they would consider looking for another job if they were forced to go back to the office full time.

The survey also challenges a number of dire predictions about the effects of remote working. Experts warned people would miss their co-workers, be less productive and become burned out — but the survey finds only minority support for these views.

Just over half of those questioned were missing their colleagues, 64% said they were more productive with a flexible work schedule, and only a third complained of burn out. Only one in three said they felt disengaged from work when working remotely. 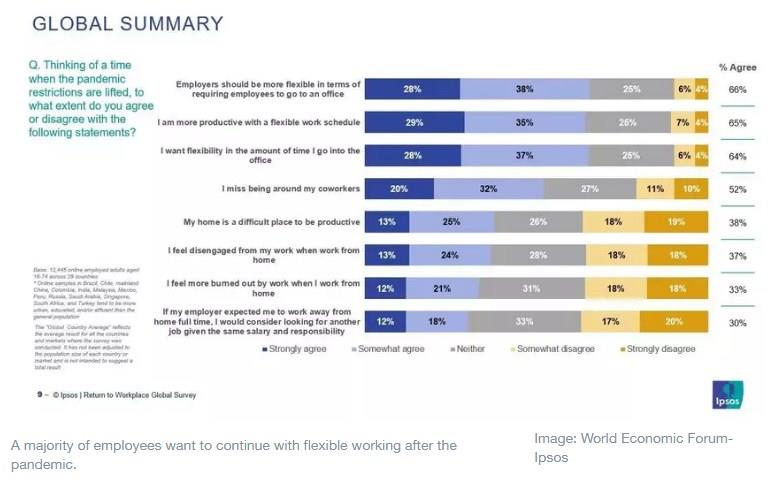 But a majority (66%) said employers should allow more flexible working in the future. Support for more flexibility was strongest among women, parents of school age children, adults under 35 and those with higher levels of education and income.

The percentage demanding more flexible working was roughly similar among people with children aged under 17 (68%) and those with no children (63%). But not everyone in the survey wanted to work from home all the time.

Globally, a quarter of people want to work in the office five days a week as soon as the pandemic is over, with the strongest support in Mexico (40%). More than a third of people in South Africa, Saudi Arabia, Peru, India, and the US also want to return five days a week.

Among those favouring flexible working, the average number of days per week people want to work from home is 2.5. People in China, Belgium and France are least keen, favouring just 1.9 days a week from home while people in India are the most enthusiastic, wanting 3.4 days. 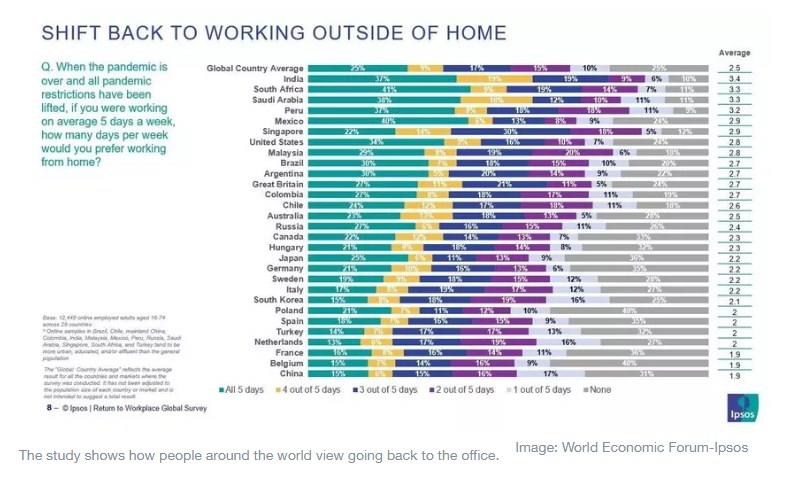 The survey highlights the shift to remote working caused by COVID-19. Before the pandemic 53% said they mostly or always worked in an office. At the time of the survey, conducted between 21 May and 4 June 2021, that figure had dropped to 39%.

The extent to which people are working mostly or wholly from home varies widely between nations from at least half of people surveyed in South America, Malaysia, Singapore and South Africa to 21% in Russia and just 15% in China.

Before the pandemic fewer than a quarter (24%) worked mostly from home globally. Today that’s risen to almost two fifths (39%) with a further 22% working outside their homes but not in an office. Three quarters (76%) now working from home say it’s a consequence of COVID-19. 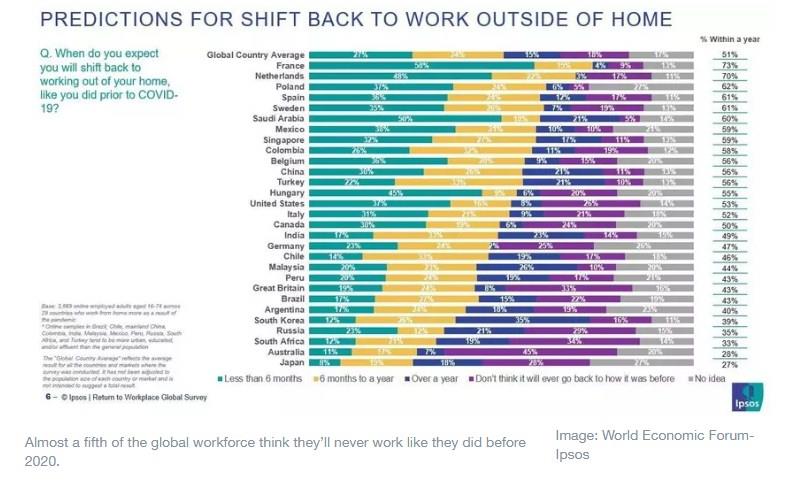 Even though a majority want to retain the work flexibility they’ve been given during the pandemic, many think it’s inevitable that they will be back to the office eventually. Over a quarter of people (27%) think it will happen within six months and a further 24% within a year.

Almost half of remote workers in France, Saudi Arabia, the Netherlands, and Hungary expect to return to the office within six months.

However, a third or more of workers in Australia, South Africa and the UK don’t expect the world of work to return to the way it was before the pandemic — a view shared by almost a fifth (18%) of the global workforce.