How Executives Should – and Shouldn’t – Engage With Customers

In 2011, we started talking with top B2B executives about their engagement with their firm’s major customers in the aftermath of the financial crisis

When done the right way, customer engagement can turn into a lucrative opportunity.

by Christoph Senn and Noel Capon*

In 2011, we started talking with top B2B executives about their engagement with their firm’s major customers in the aftermath of the financial crisis. The vast majority told us that they were very involved, to great effect. However, when we interviewed their sales account managers, we heard a different tale. While a minority of executives did well, many seemed to need at least some guidance.

We realised that self-reports would be unlikely to give us the true picture. So, from 2012 to 2018, we conducted 30 executive education workshops with more than 500 strategic and global account managers in the United States, Netherlands, Switzerland and Singapore. This allowed us to identify five distinct archetypes describing the roles executives play with key customers.

From most to least common, these archetypes are the hands-off, the loose cannon, the social visitor, the dealmaker and the growth champion. Each comes with its own set of rewards and risks and has a different impact on business performance. 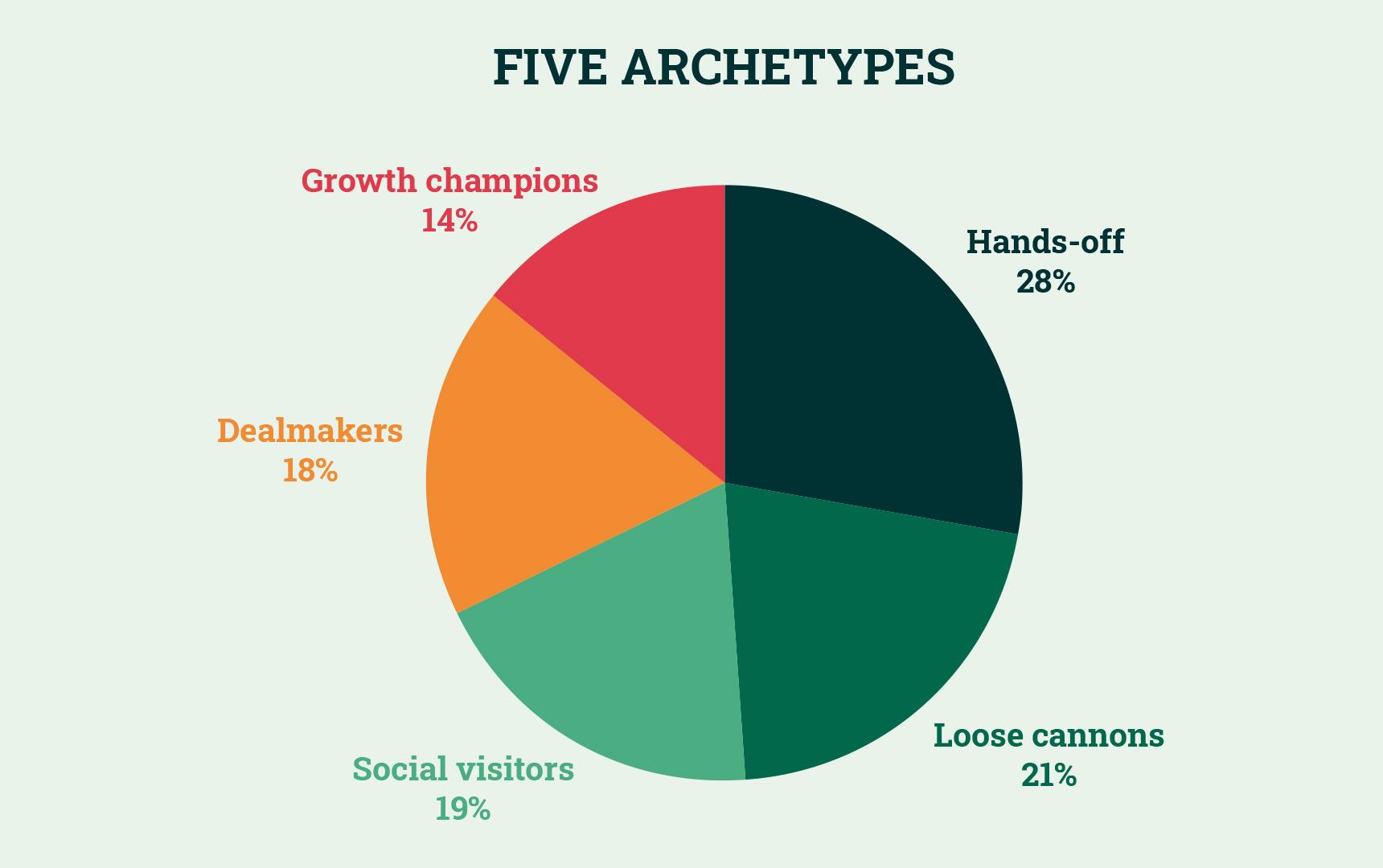 A full 28 percent of the executives adopt a hands-off policy with sales, hardly ever meeting customers. We were surprised to find how prevalent this approach was. While letting the sales force do its job sounds like a sensible approach, the sales function represents a critical interface between supplier and customer. As such, it deserves closer attention on the part of executives, beyond ensuring that HR has hired the best talent and that salespeople have adequate tools and training. If not, our data show that firms leave money on the table (more on that later).

The hands-off’s motto: “Not my problem”

This is the second most common type, representing 21 percent of the executives in our sample. Loose cannons typically meet with key customers without any briefing from their account managers. They may even keep quiet about the meeting after it has happened. In the worst cases, the executive ends up making promises the firm simply cannot keep. Blindsided account managers must then scramble to repair the harm done. Executives who act on their own are more likely to damage than enhance the customer relationship, leading some firms to implement processes to mitigate this behaviour.

When interacting with core customers, top executives can pursue two goals: to increase revenues and to foster strong relationships. Social visitors, who form 19 percent of our sample, clearly prioritise the latter. They love to organise meet-and-greets, join cocktail parties at trade shows and host fun educational events. Although much less destructive than loose cannons, social visitors may leave customers frustrated by the superficiality of the engagement. And by avoiding substantive discussions about business issues, they too leave money on the table.

The social visitor’s motto: “Cheers, everyone!”

Representing 18 percent of our sample, dealmakers are not quite as concerned with relationship building. They swoop in when significant revenue opportunities arise or at the tail end of a customer’s buying cycle. They can provide extra reassurance to customers who fret the supplier may not live up to its commitments. The main problem with this approach is that it can become unsustainable. The executive’s involvement may also come too late and be costly if the boss is overly keen to make concessions to close the deal and move on to the next emergency.

This type of executive, the rarest in our sample at 14 percent, strikes the right balance between revenue generation and relationship building. They frequently accompany account managers on their visits, looking for ways to enhance the value offered to customers. As champions of customer centricity, they can even pave the way for cultural change. However, that is not to say the approach is devoid of downsides. It can create intense pressure for the sales team, especially if the executive was once in sales and is prone to micromanaging.

Estimating the financial impact of the different archetypes

After we identified these five archetypes, we sought to understand the impact of each one on the firm’s financial performance. We looked at the five-year sales and profit growth for each company in our study and found that both sales and profits were generally flat in firms with hands-off and loose-cannon executives. Specifically, their 5-year compound annual growth rates (CAGR) for sales were 1.2 and 1.7 percent, respectively. For profits, it was -0.3 and 2.7 percent.

Social visitors and dealmakers were markedly more apt at increasing sales and profits. The growth rates of their firms were, on average, two to three times higher than those achieved by their hands-off and loose-cannon counterparts. Our data showed a 5-year CAGR for sales of 4.7 and 4.1 percent, respectively, and of 6.9 and 7.7 percent for profits.

But by far the most effective group was composed of the growth champions. They increased the sales and profits of their firms at twice the rates of social visitors and dealmakers. They clocked a stellar 5-year CAGR of 8.8 and 9.7 percent in terms of sales and profits.

Increasing the number of growth champions in a firm can have staggering results. Using our CAGR data, we ran a real-life simulation with a US$10 billion company. An initial self-assessment revealed that the firm’s 19 high-level executives were spread across the first four archetypes. Each orange dot represents an executive. 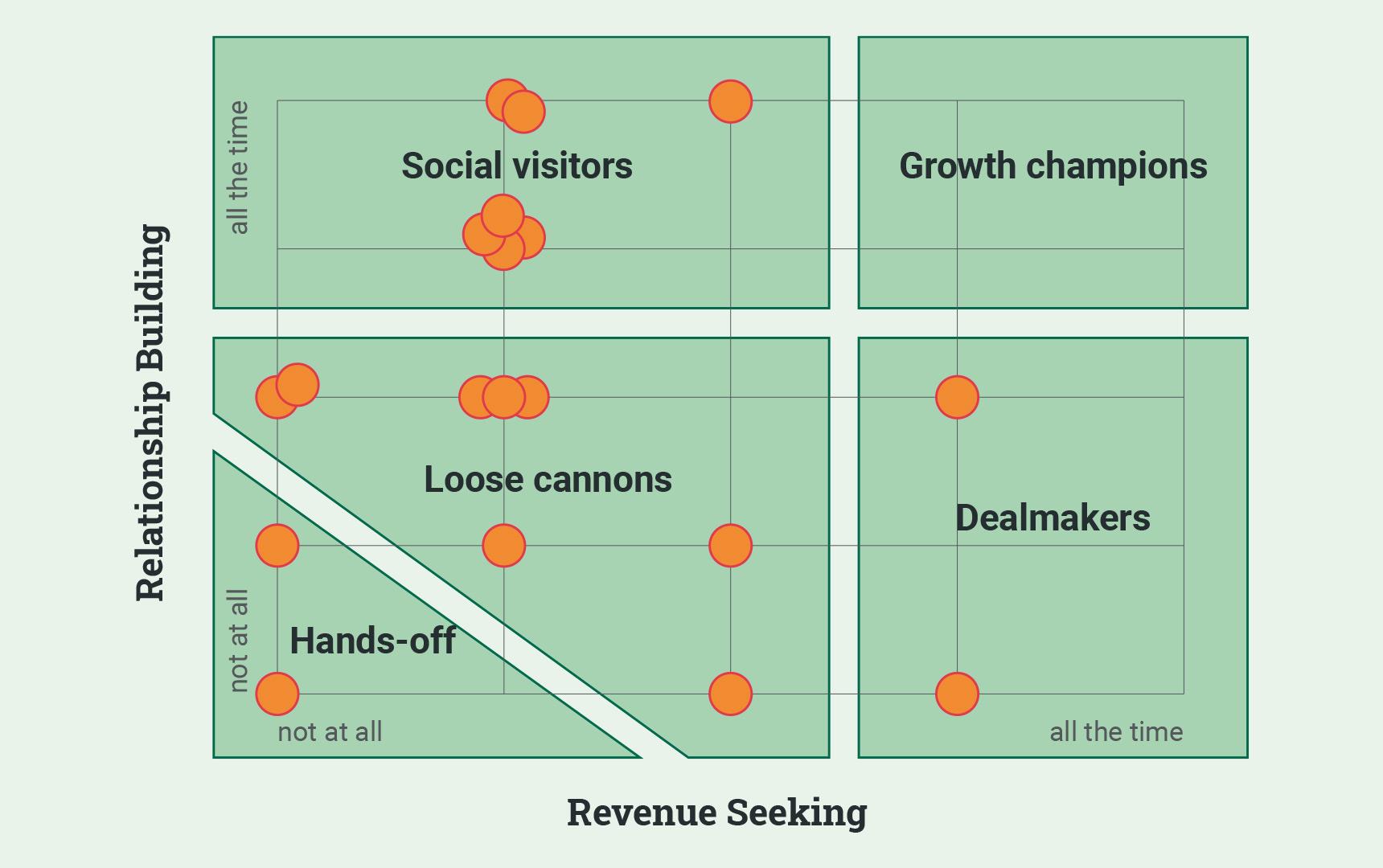 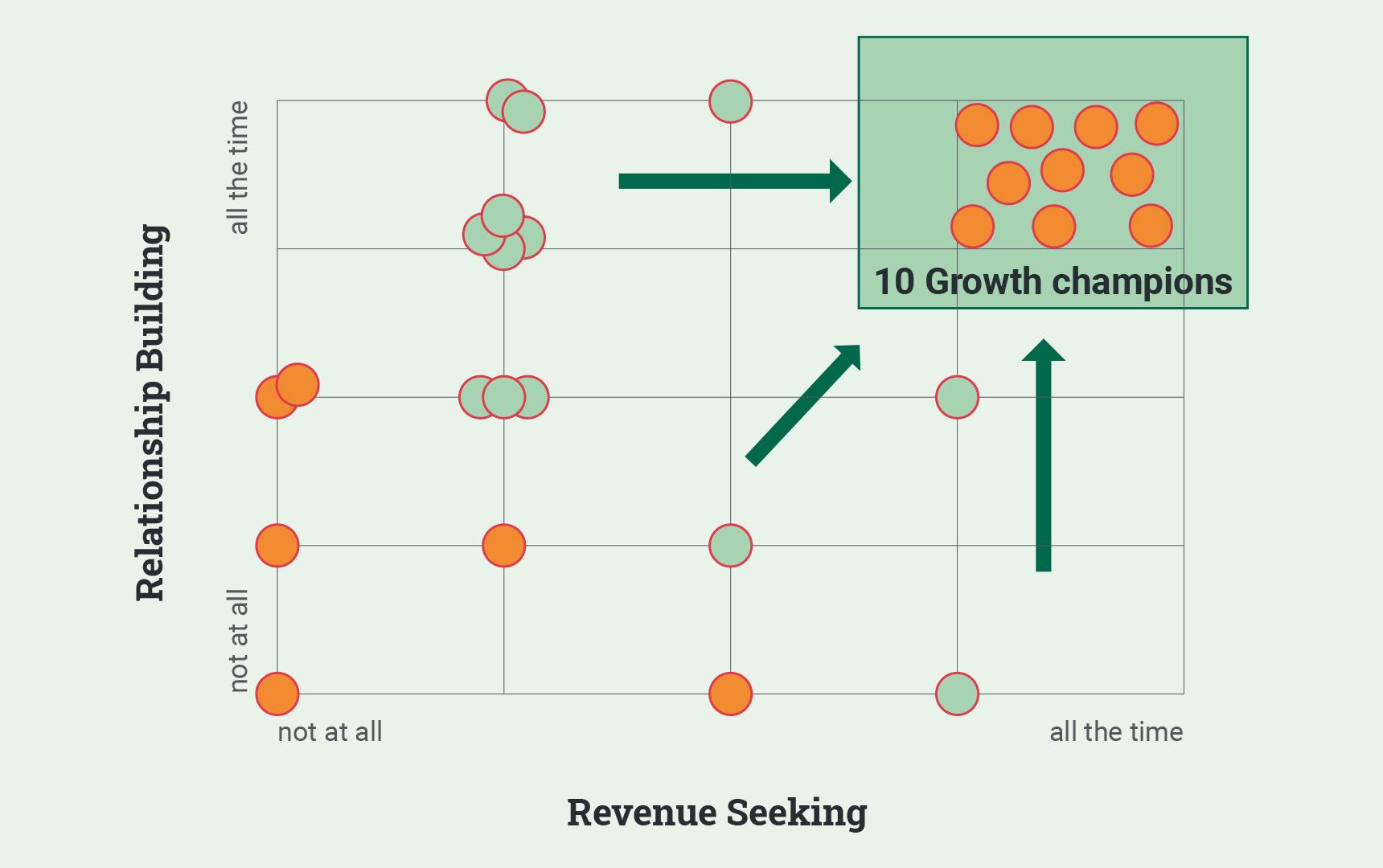 Using the CAGR data from our research, we then calculated the difference between the zero growth-champion scenario and a 10 growth-champions scenario. With 10 newly minted growth champions, the company would be set for additional sales of US$590 million versus US$300 million per year – potentially doubling its sales growth. Needless to say, these projections made the senior executives seriously rethink their involvement in customer relationships. Shortly afterwards, the company embarked on a group-wide executive sponsor programme with very favourable outcomes.

One caveat: Not every high-level B2B executive needs to (or can) transform into a growth champion. While hands-off executives need to reconsider their approach the most, taking the customer context and life cycle into account remains paramount. Some customers will prefer a social visitor, often at the beginning of a relationship. Others want to stay purely transactional and believe they would do well with a dealmaker, before realising the value of a growth champion. But over the long term, all firms should try to move their customer engagement to the next level, or risk losing key customers to the hands of wiser competitors.