Where are fleeing Afghans finding refuge?

Afghans have left their country in large numbers for the last four decades, fleeing a communist coup, a destabilizing Soviet invasion that led to the Taliban’s repressive theocracy, and the tumult that followed “Operation Enduring Freedom”

"A number of countries have stepped up to take in people escaping from the chaos in Afghanistan."

Afghans have left their country in large numbers for the last four decades, fleeing a communist coup, a destabilizing Soviet invasion that led to the Taliban’s repressive theocracy, and the tumult that followed “Operation Enduring Freedom.”

The result is the third-largest displaced population in the world.

Now, the collapse of Afghanistan’s Western-backed government, abrupt pullout of US troops, and return to power of the Taliban have spurred more Afghans to seek a way out – braving potentially deadly attacks in the process.

Dozens of countries have pledged to take them in, both before and after the 31 August deadline for a full US military withdrawal.

As of last week Canada had evacuated about 3,700 people from Kabul, including many Afghans who will be resettled locally, and it has promised to ultimately take in a total of 20,000. The UK has pledged to welcome as many as 20,000 Afghan refugees, Australia has made room for 3,000 within an existing resettlement program, and Tajikistan, already home to a sizeable Afghan refugee population, has committed to taking in 100,000 more.

About 20,000 Afghans are believed to be awaiting a US visa designated for people who helped the American military or diplomats, which can be difficult to obtain – though the US has pledged to separately receive and resettle up to 50,000 Afghans under a stopgap program.

Regardless of the inevitable fearmongering, refugees often come equipped with the sort of resourcefulness and grit that can form the lifeblood of an economy. Many follow paths similar to a recently-profiled former Afghan government minister working as a bicycle courier in Leipzig, who spends four hours in German-language classes every day before a six-hour shift delivering meals.

While the fall of the Taliban in 2001 led to many Afghans abroad returning home, countries including Germany have actually seen their Afghan refugee populations increase significantly in recent years.

Still, the bulk of Afghan refugees don’t travel as far as Europe; as of last year, 85% of all registered Afghan refugees globally were being hosted in neighbouring Pakistan and Iran.

Pakistan has been a primary destination since the 1970s, and is home to about 1.4 million registered Afghan refugees – though it’s become significantly less welcoming over the years.

About 600,000 Afghans returned or were deported from Pakistan and Iran during the first half of this year alone, according to the UN Refugee Agency. Most had left home to seek employment or medical treatment, avoid conflict, or see family; nearly all deportees said they lacked proper documentation they hadn’t really been able to afford.

In other countries further afield, like Germany, leaders now face added political pressure to limit the number of new arrivals from Afghanistan.

In still others, there has been a more prolonged downturn in hospitality.

In the US, for example, general acceptance rates for refugees have fallen significantly in the past four decades – a time period that tracks evenly with the unfolding of Afghanistan’s ongoing humanitarian crisis. 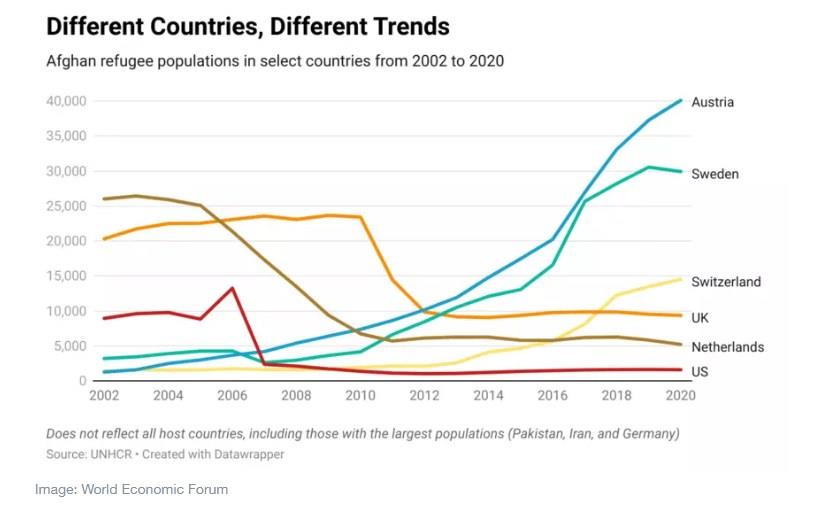 -So, what’s the real impact of refugees and immigrants on a host country? According to this recent research, countries that treat refugees with compassion and accept them in greater numbers tend to have relatively low levels of violence. (The Conversation)
-“Fakhruddin Akbari is allowing his full name to be published because he is certain he is going to die.” Read the story of Afghans who won the US visa lottery but were then stranded in legal limbo. (ProPublica)
-In Pakistan, already home to 1.4 million registered Afghan refugees and an estimated one million more unregistered Afghan nationals, the author of this piece is certain additional arrivals will receive a “cold welcome.” (Center for Global Development)
-Australia is accepting thousands of refugees from Afghanistan, but according to this piece its government should do more by creating a special program similar to one designed for people fleeing from Iraq and Syria several years ago. (Australian Strategic Policy Institute)
-The Taliban takeover has undoubtedly put women’s lives in danger in new ways, according to the author of this piece – but in order to help we need to first understand the ways in which Afghan women’s lives were already challenging. (The Conversation)
-“We spent years risking our lives for the Germans,” an Afghan employee of a German aid organization left behind in Kabul is quoted as saying in this report, “and now, we are simply being left to our fates.” (Der Spiegel)
-The author of this piece grew up in Islamabad in the 1980s, and writes that the conversation in Pakistan about Afghan refugees was then – just as it is now – largely xenophobic. (The New Humanitarian)