The COVID-19 pandemic has shown that digital technologies determine not only whether or not countries thrive, but also how well they are able to navigate trying times

"New report analyses and ranks 140 countries by their digital competitiveness over the last three years."

The COVID-19 pandemic has shown that digital technologies determine not only whether or not countries thrive, but also how well they are able to navigate trying times. Applied effectively, digital technologies not only enable education and work to move from schools and offices to the home, but they also provide increasingly efficient ways to organize processes in companies and governments.

New technologies such as 3D printing, augmented and virtual reality, sensors, artificial intelligence, quantum computing and robotics also have the potential to disrupt nearly any industry. The competitivess of nations in these technologies will determine how prosperous their countries will be in the decades ahead.

Against this background, we analysed how countries digital competitiveness developed in the last three years. In the new edition of the Digital Riser Report from the European Center for Digital Competitiveness by ESCP Europe Business School, we have analysed the digital competitiveness of 140 countries and provide a global ranking that compares them within their regions. We show which countries have lost ground as well as which countries have done well and improved their position relative to their peers. We also highlight what can be learned from the best and analyse the political measures that made the "Digital Risers" successful.

Within the G7, Canada was able to advance most in its relative digital competitiveness between 2018 and 2020, which makes the country our top Digital Riser in this group; conversely, Japan and Germany decreased most within the G7. Italy was able to improve its position in the G7 from last place in the previous year to second place in 2021.

Within the G20, the ranking reveals strong dynamics also regarding the two global digital superpowers: China gained significantly in digital competitiveness, while the US lost out over the same time period, mainly driven by the ecosystem dimension in our ranking. The top three Digital Risers in the G20 have been China followed by Saudi Arabia and Brazil; India, Japan and Germany came last. 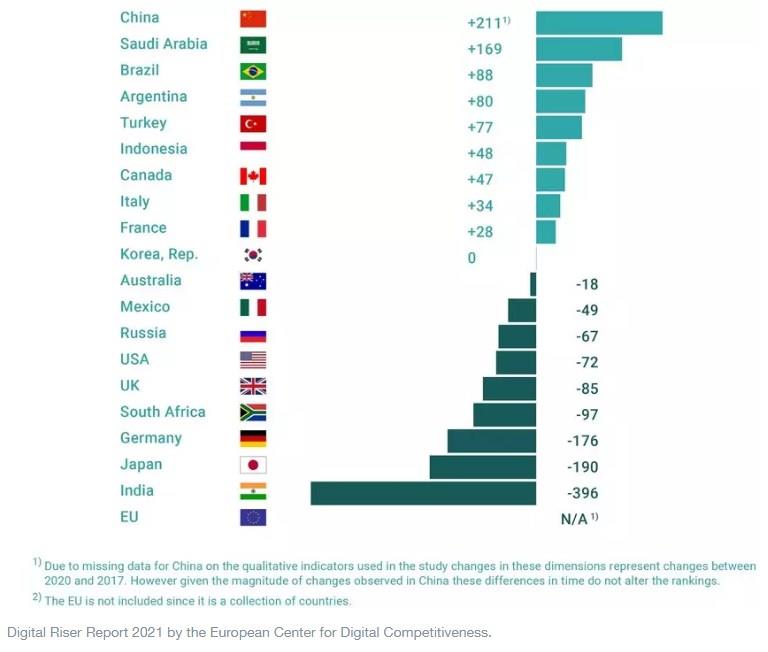 The report analyses the progress of 140 countries along mindset and ecosystem dimensions as well as the absolute, accumulated change in ranks between 2018 and 2020. Countries were analysed and compared relative to their peers in terms of regions (i.e. Europe and North America) or group membership (i.e. G20), to ensure the comparability of results relative to a comparative baseline.

As in last year’s report, we have analysed two factors: how much progress countries have made relative to their global peers in the last three years, and the best practices of the top Digital Risers in their respective region or group. We thus highlight developments and initiatives that may inform political decision-makers around the world on which practices to implement, based on what has proven successful in their region and beyond. Here is a summary of the best practices the Digital Risers share:

China for example has implemented a comprehensive push for entrepreneurship and innovation. With its China 2025 initiative, it provides state support for 10 key sectors in which it aims to become a world leader. Other nations have also formulated ambitious visions for their digital future: Vietnam wants its digital economy to account for 30% of GDP by 2030, and Hungary has defined its goal to become one of the 10 leading countries in digital technologies in Europe by the end of the decade. But the successful Digital Risers also launch concrete initiatives to support these goals. Italy for instance has started “Repubblica Digitale”, a new programme to overcome the digital divide, promote digital inclusion and strengthen the development of digital skills among citizens.

2) They focus on entrepreneurship

Brazil for example has initated various public and public-private efforts to stimulate entrepreneurship in the country such as the “InovAtiva Brasil” programme, “StartOut Brasil” and the National Committee of Start-Up Support Initiatives. In Egypt, the government has supported the development of six technology parks to foster innovation and entrepreneurship. Also the Canadian government has invested over $1.2 billion in so-called “Innovation Superclusters” to accelerate business-driven innovation, with the potential to energise the economy.

However, our report also shows a growing divide in the speed of digital transformation. In Europe, a two-speed transformation continues. As in last year’s report, France made significant advances in its digital competitiveness while Germany lost quite substantially during the same time period. But digital progress is possible around the globe when the right measures are implemented. While Digital Risers such as Canada and Georgia might not come not directly to mind when it comes to digital, these countries demonstrate that acceleration in the speed of digital transformation can be achieved in companies and governments.