Why do so many people still oppose vaccination for COVID?

"Someone who is 80 years old today may have suffered from Polio, Measles, Varicella (Chicken Pox), and other diseases in her youth, although all are among the diseases that today are on the list of routine childhood vaccinations."

Roughly one in every five adults in the United States is strongly opposed to obtaining any vaccination against COVID. Many more are among the even larger share of the U.S. population that has not yet been vaccinated but is not ideologically opposed to the idea.

Relatively many of the unvaccinated are young, 12-30 years old, or younger than 12, for whom vaccination is not yet approved.

In the context of historical developments in medical knowledge and the payoff of this knowledge in life expectancy, the level of ideological rejection of vaccination against COVID is astonishing.

Let us consider the historical story

We begin in Sweden, where there is a long historical record of life expectancy that has been relatively unaffected by extra dying through wars.

Sweden’s record of natural life expectancy parallels that of the rest of the modern world. Similarly, changes in Sweden over the period 1750-2015 in what is done to promote health have parallels throughout the “North.”

The chart below shows the evolution of life expectancy numbers for Swedish men and women from 1751 through 2015. Life expectancy at birth is shown in pink (men) and red (women), while gold and brown bars represent corresponding life expectancy for those who have survived to age 50. 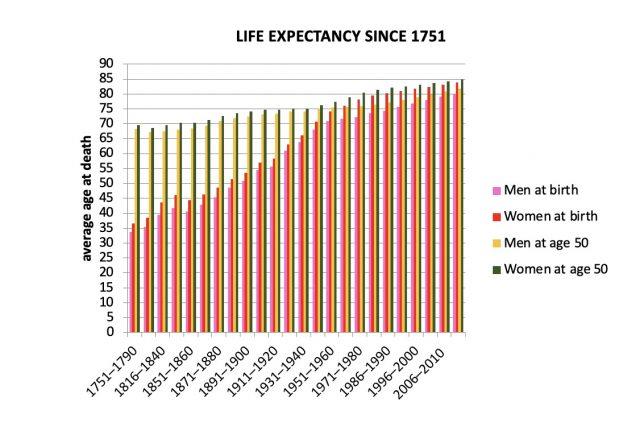 1.The severe loss of life among those younger than 50, from infant and childhood deaths, maternal deaths, and the deaths of soldiers, diminishes steadily. (The vertical gap between the first two and the last two bars at each date has almost disappeared by the middle of the twentieth century.)
2.Life expectancy at birth for men and women both has risen from fewer than 40 years before the industrial revolution to more than 80 years in this century.
3.Life expectancy at birth has been rising throughout the last 250 years but it remained below 50 years until the end of the 19th century.
4.Women have on average outlived men throughout.

To repeat, in spite of the steady rise in life expectancy, Europe and the United States entered the twentieth century with life expectancy at birth still only about 50 years.

Before 1900, most increases in life expectancy probably were due to improvements in standards of living, more reliable access to food and water.

Eradicating the threat of communicable diseases

But communicable disease was a ubiquitous threat, particularly to the very young. According to the CDC, “…in 1900, the three leading causes of death [in the United States] were pneumonia, tuberculosis (TB), and diarrhea and enteritis.

Together with diphtheria, they caused one third of all deaths. Of these deaths, 40% were among children aged less than 5 years.” (See Achievements in Public Health, 1900-1999: Control of Infectious Diseases)

Since the early 20th century, the acceptance of the germ theory of disease and its implications for behavior and technology account for most of the thirty-plus years that have been added to life expectancy.

Hand washing with soap, understanding what makes surfaces and, most important, water ”clean,” and isolation of sick people certainly have become the norm, to everyone’s benefit.

Identification of pathogens and vaccine development

Most crucially, the identification of pathogens has led to vaccinations against an ever-growing list of communicable diseases. This has been vital to health, especially the health of the very young.

Finally, after 1950, antibiotics have come into widespread use (too widespread, perhaps), further reducing the threat to young and old from bacterial diseases. Today, apart from novel pathogens, few deaths are due to communicable diseases.

Childhood vaccinations – the gift of a long life

A child in the United States today is vaccinated perhaps three dozen times before becoming an adult. The list, below, of recommended vaccines for children, as of 2021, includes 15 vaccinations covering 19 different diseases. Almost every course of vaccination involves multiple inoculations.

1. These vaccine and vaccine cocktail recommendations are from the CDC. Cocktails sometimes vary.

2. All of these vaccines require multiple doses before age 18

Worldwide elimination of smallpox by 1980

Notably absent from the list is Smallpox, the disease that sparked the idea of vaccination. Smallpox was removed from the list after active cases were eliminated worldwide in 1980 (the last case of active Smallpox occurred in the US in 1949).

The steady increase in life expectancy makes it hard to argue that health practices have not improved steadily. Of course, any given change could degrade rather than improve health and life expectancy.

But it is hard to argue with the proposition that whatever we are doing today that we did not do in 1950 or 1900 or 1800 – or 2020, for that matter — probably has benefitted our health and life expectancy.

The change has been amazingly rapid

Someone who is 80 years old today may have suffered from Polio, Measles, Varicella (Chicken Pox), and other diseases in her youth, although all are among the diseases that today are on the list of routine childhood vaccinations.

In light of this prima facie case for vaccination, how should one understand widespread hostility to vaccination against COVID, hostility that not only threatens the non-vaccinated person but everyone in a world where the epidemic is mutating and spreading so aggressively?

This is a question that cannot be answered yet with evidence and scientific methods. Why do voters choose tyrants and fools? How can so many people reject evidence that is laid before them? These challenges, to sociologists and philosophers, are among the central political issues of our time.

*Mexico based and a former professor of economics at New York University
**first published in: www.theglobalist.com