This is how shorter working hours can affect your productivity

Is it true that less really is more? Can companies, by asking less of their workers, actually get more out of them?

"It has been argued that when workers are already working long weeks, adding more hours can reduce productivity."

Is it true that less really is more? Can companies, by asking less of their workers, actually get more out of them? The answer, at least in some cases, is yes. A historical example happened in Britain during WWI. Workers, most of them women paid on piece rates and working long weekly hours, were engaged with the task of manufacturing artillery shells for the British military. Although investing more hours allowed these women to increase their production, that was true only up to a point. When the workweek was already quite long, assigning additional hours reduced productivity, perhaps due to workers’ fatigue and exhaustion. In short, the relationship between a worker’s productivity and her working hours exhibited an inverted U shape.

This intriguing phenomenon from a century ago – discovered by Pencavel (2015) – raises important questions for today. Does this pattern of hours and productivity exist in the modern workplace? Can it be found outside of the simple, individualistic production process of military manufacturing? Is it observed in the more complex, team-oriented production settings that increasingly describe the modern workplace? If so, does the way in which working hours are allocated across a team’s members matter for productivity and, if so, how? Does productivity actually increase if companies impose shorter work schedules to cut back on labour during a recession?

In a new paper (Shangguan et al. 2021), we tackle these questions using project management and personnel data from a Japanese architectural design and consultancy firm. Specifically, we examine how the firm responded to the Global Crisis of 2008-2009 in terms of the working hours it assigned to the firm’s project design teams, and we assess how those hours assignments affected team productivity. We find evidence of the ‘less is more’ result documented in Pencavel (2015) but with some interesting new twists due to the team setting. One of those twists concerns how working hours are allocated across team members. After the crisis, hours become more concentrated within the team as work schedules become shorter. That is, the number of team members shrinks, and a higher fraction of the team’s total hours is contributed by the team member who invests the longest hours as demand declines.

Japan, a country long known for its long working hours and high levels of job security, offers an ideal setting in which to study these questions. Our findings should be of interest from a policy perspective because the country’s tradition of long hours is recently being called into question, as many companies strive to reduce overtime hours under the banner of ‘work style reform’. The impetus for this shift is a pledge made by Shinzo Abe’s administration in 2016, resulting in the revision of various labour-related laws (such as setting the upper limit on working hours) that came into effect in 2019. While there was a shared understanding in society that reducing long working hours was necessary for the physical and mental health of workers, there was persistent concern that reducing long working hours would further undermine the competitiveness of Japanese companies. But would it? The lesson from the case of British munitions workers from a century ago suggests otherwise.

It is well known that when a recession hits, and demand for products and services drops, companies typically respond with measures to reduce labour costs. This can be done in two ways: by laying off workers or by reducing working hours.

If layoffs are used, labour productivity may increase as workers try to improve their performance by exerting effort to avoid being laid off in a situation where it is difficult to change jobs (Lazear et al. 2016).

In many Japanese companies, because of the high levels of job security that workers traditionally enjoy, the tendency is to respond to a drop in demand by reducing hours rather than workers. Particularly if working hours were excessively long before being cut, labour productivity may increase as workers who were previously exhausted recover from fatigue and arrive for work more rested and with greater energy and concentration. In the firm we study, the turnover rate remained consistently low during the 2008-2009 recession. The worker attrition that occurred over time happened mainly through reduced hiring. On the other hand, as Figure 1 shows, the average monthly overtime hours decreased significantly during the crisis period. 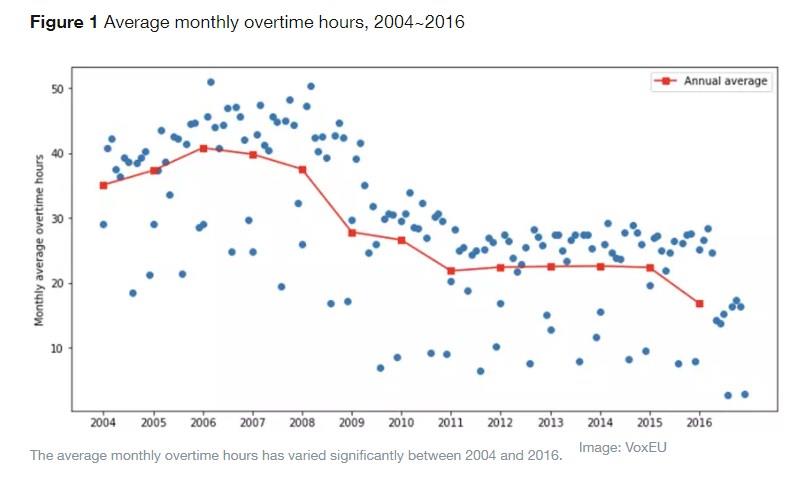 In the firm that we study, design projects are divided into phases called jobs, and work is executed by teams. Team productivity is measured by dividing the income (which is set in a contract in advance), by the total working hours of the team’s members. Figure 2 shows that the team-level productivity index increased after the Global Crisis. The regression analysis estimates that there was a 7.6% increase in team productivity. Team productivity is not necessarily an average of individual productivity because two new factors are added. First, team members’ individual outputs are interdependent. Namely, one member’s high-quality output executed at the right timing also helps another member to do a good job in a timely manner. This is the complementarity between the work of individual team members. Second, the assignment of tasks to workers with different abilities will be adjusted if more capable workers can focus more on a smaller number of jobs in response to a weak demand. This allows the more capable workers to take more tasks in each of the remaining jobs. 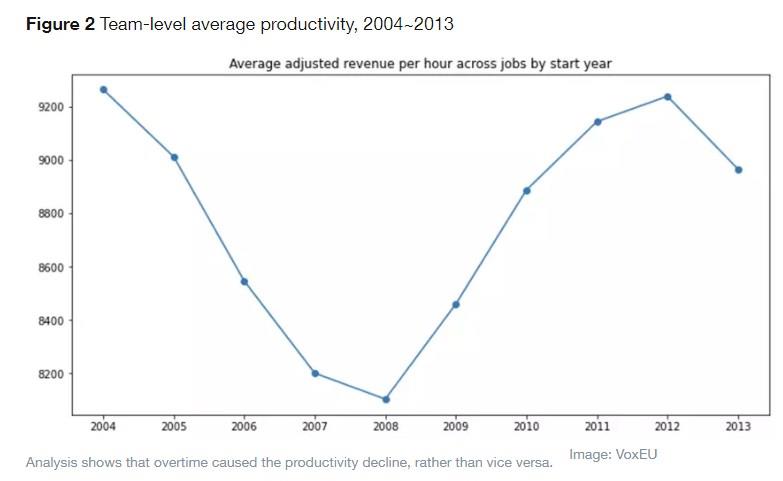 In the study, we propose and calibrate a theoretical model to analyse within-team labour allocation and show empirically that complementarity and labour reallocation within the team are important determinants of team labour productivity. In the model, as the project workload increases, less capable workers are increasingly assigned to the team as the more capable team members become unable to handle the workload themselves. This leads to a decrease in the team’s average productivity. This mechanism, operating in reverse as demand fell, was a driver of productivity growth during the Global Crisis.

Specifically, concerning the firm’s response to the decrease in hours resulting from the crisis:

(2) The productivity improvement was greater for larger teams and less productive teams.

Our analysis shows that overtime caused the productivity decline, rather than vice versa. In particular, the more overtime that is supplied by the team member who invests the most time on a project, the more damaging is the effect on team productivity. We also find that the long working hours of key team members not only reduce productivity but also contribute to an increased frequency of design defects.

These results suggest that when long working hours are reduced, individual productivity increases, and fewer mistakes are made at work. This might happen because workers recover from fatigue and arrive for work with increased energy and focus. The increased productivity of these rejuvenated workers in turn leads to increased productivity of their teammates in complementary relationships. Since fewer team members are then needed to finish the job, there is no need to add less capable workers to help with the workload. This reduces team size and increases team productivity. Prior empirical studies suggest this series of mechanisms, and, along with our work, support the likely effectiveness of work style reforms aimed at shifting towards shorter work schedules.