Unless CO2 emissions drop significantly, global warming will make the Amazon barren, the American Midwest tropical, and India too hot to live in by 2500, according to a team of scientists

"Experts have emphasized that if we fail to meet the Paris Agreement goals, many places on Earth will change drastically and become too hot to live in by 2500".

Unless CO2 emissions drop significantly, global warming will make the Amazon barren, the American Midwest tropical, and India too hot to live in by 2500, according to a team of scientists.

“We need to envision the Earth our children and grandchildren may face, and what we can do now to make it just and livable for them,” says Christopher Lyon, a postdoctoral researcher under the supervision of professor Elena Bennett at McGill University. “If we fail to meet the Paris Agreement goals, and emissions keep rising, many places in the world will dramatically change.”

The scientists ran global climate model projections based on time dependent projections of atmospheric greenhouse gas concentrations for low, medium, and high mitigation scenarios up to the year 2500. Their findings, published in Global Change Biology, reveal an Earth that is alien to humans.

Under low and medium mitigation scenarios—which do not meet the Paris Agreement goal to limit global warming to well below 2 degrees Celsius—vegetation and the best crop-growing areas may move toward the poles. The area suitable for some crops would also shrink. Places with long histories of cultural and ecosystem richness, like the Amazon Basin, may become barren.

They also found that heat stress may reach fatal levels for humans in tropical regions that are highly populated. Even under high-mitigation scenarios, the team found that the sea level keeps rising due to expanding and mixing water in warming oceans. 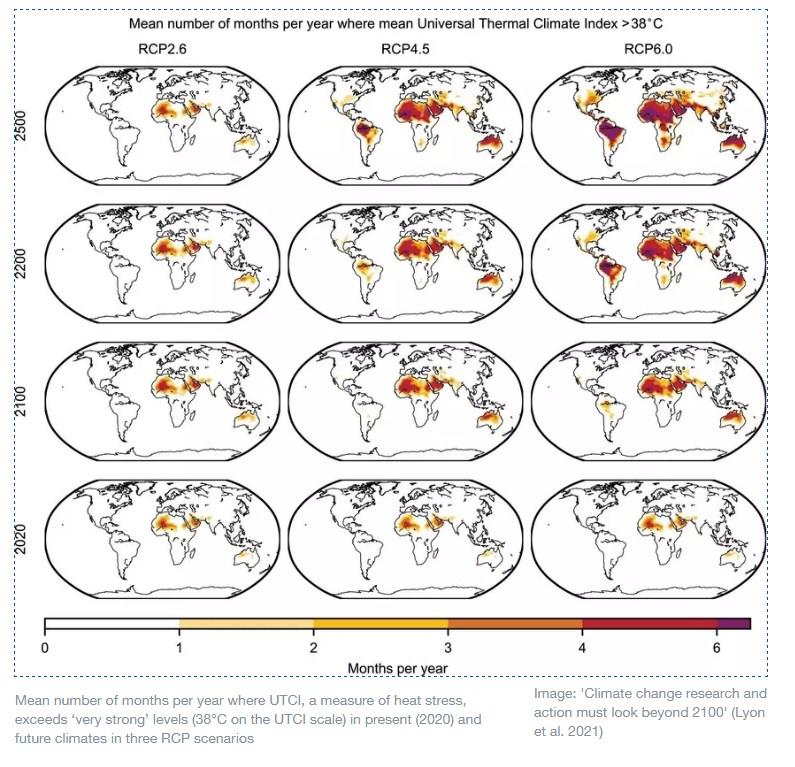 “These projections point to the potential magnitude of climate upheaval on longer time scales and fall within the range of assessments made by others,” says Lyon.

Although many reports based on scientific research talk about the long-term impacts of climate change—such as rising levels of greenhouse gases, temperatures, and sea levels—most of them don’t look beyond the 2100 horizon. To fully grasp and plan for climate impacts under any scenario, researchers and policymakers must look well beyond the 2100 benchmark, says the team.

“The Paris Agreement, the United Nations, and the Intergovernmental Panel on Climate Change’s scientific assessment reports, all show us what we need to do before 2100 to meet our goals, and what could happen if we don’t,” says Lyon. “But this benchmark, which has been used for over 30 years, is short-sighted because people born now will only be in their 70s by 2100.”

Climate projections and the policies that depend on them, shouldn’t stop at 2100 because they cannot fully grasp the potential long-term scope of climate impacts, the scientists conclude.