How can developing economies recover from the pandemic?

"Global government debt soared in the pandemic-induced global recession, tempting some to rely on post-pandemic growth and inflation to reduce debt burdens".

In last year’s COVID-19-induced global recession, global government debt surged in its largest single-year increase on record. Globally, government debt stood at a five-decade record of 97% of GDP and, in emerging market and developing economies (EMDEs), at a three-decade record of 63% of GDP in 2020. This comes on top of soaring private external debt, which often hits the public balance sheets in a crisis, not to mention considerable strains on EMDE banking systems.

How will this debt eventually be resolved?

EMDEs may find it tempting to rely on the post-pandemic growth and inflation rebound to reduce debt burdens (Bianchi et al. 2020). The global economy has rebounded from last years’ recession in the strongest recovery from any global recession in eight decades. This has been accompanied by a remarkably early and fast rebound in global inflation after an unusually muted decline during last year’s global recession (Figure 1). 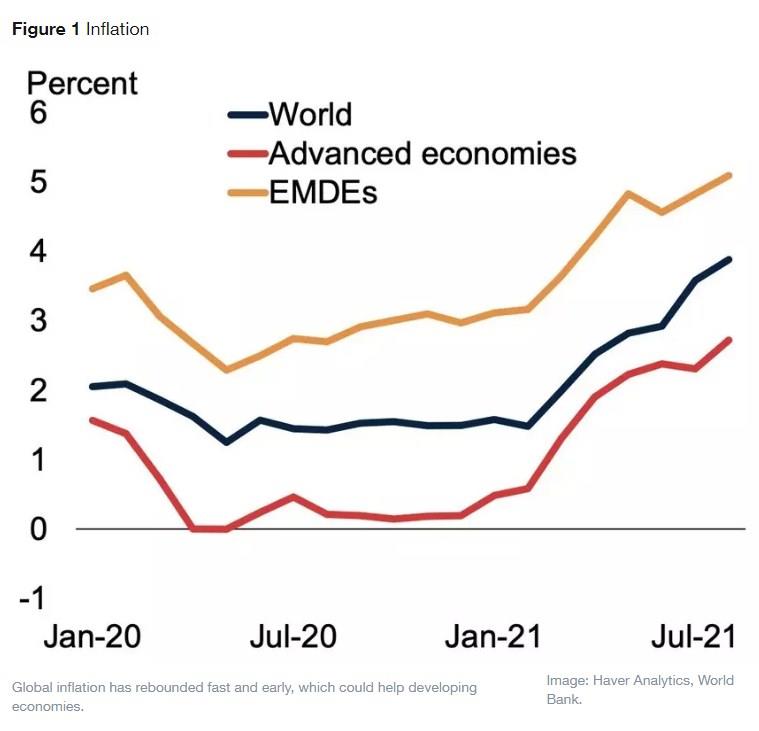 Note: CPI refers to consumer price index. Year-on-year group median inflation for 81 countries, of which 31 are advanced economies and 50 are EMDEs.

But to what extent can EMDE policymakers rely on inflation and growth for reducing government debt burdens in a lasting manner? Our recent study (Kose et al. 2021a) sheds light on this question, as well as two others: What role can default play in returning debt to manageable levels? How can the global community help lessen debt burdens?

Unexpected inflation can erode real debt burdens if it raises nominal incomes faster than nominal interest rates. Inflation, typically combined with financial repression, has been credited with debt reduction in advanced economies after WWII and in Latin America in the 1980s and 1990s.

However, inflation has drawbacks as a debt reduction strategy, especially for EMDEs. First, the subsequent disinflation that would be needed to return to low and stable inflation would be economically costly.

Second, inflation is unlikely to reduce real debt burdens in a lasting manner when the share of short-term debt or foreign currency-denominated debt is large. In the median EMDE, foreign-currency denominated government debt accounted for 42% of government debt in 2019. If a large share of debt is short-term and needs to be rolled over, interest rates on newly issued debt will rise with inflation because investors demand higher interest rates in compensation. If a large share of debt is foreign currency-denominated, the depreciation that typically accompanies inflation raises debt service burdens. Historically, in periods when EMDE debt service on external debt exceeds 22% of exports – a level EMDEs are now again approaching for the first time in three decades – the rate of debt default exceeded 20% (Figure 2). Challenges also arise when government debt is predominantly external as foreign creditors can more readily escape domestic financial repression. 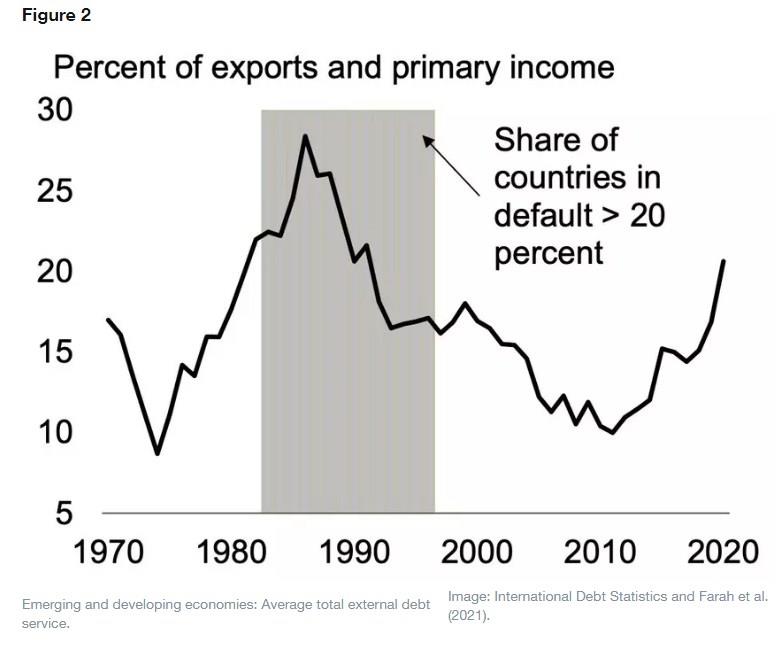 Note: Debt service is an average for 123 EMDEs; exports refer to exports of goods and services. Shaded area indicates years in which more than 20 percent of countries (of a sample of up to 193 in 2020) were in default.

Third, as high inflation becomes entrenched in expectations, it is reflected in nominal interest rates and no longer reduces the real value of debt. While financial repression may prevent a rise in interest rates to match inflation, it is a policy that distorts economic activity and is difficult to sustain after decades of open financial markets and capital accounts. As a result, surprise inflation would be most useful for a one-off reduction in high debt. If high debt is the result of persistent spending pressures or revenue weaknesses – as it has been over the past decade – a bout of surprise inflation cannot reduce real debt burdens in a lasting manner. Moreover, persistently high inflation risks undermining the hard-won credibility that some EMDE central banks have achieved over the past three decades.

Historically, some advanced economies and EMDEs were able to reduce debt by achieving growth rates in excess of interest rates. This includes US debt reduction after WWII as well as debt reductions for at least two years in 50 EMDEs since the 1980s (Reinhart et al. 2015, Baldacci et al. 2012). In fact, most of the time, including over the 2010s, growth rates have been sufficiently high to exceed the interest cost of government debt in advanced economies and EMDEs alike (Kose et al. 2020). Nevertheless, interest spending in EMDEs rose steadily over the 2010s (Figure 3). 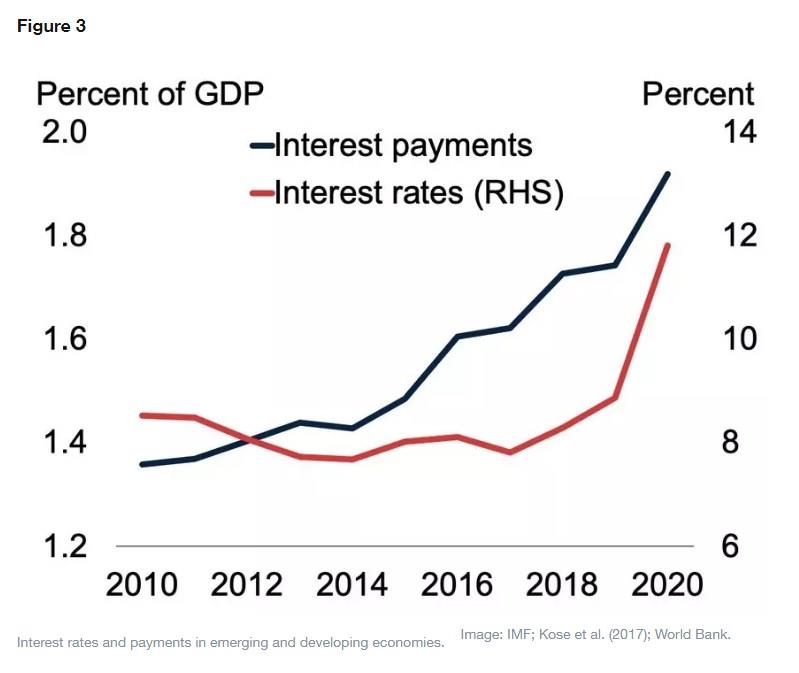 Note: Unweighted averages of long-term nominal interest rates for up to 84 EMDEs and interest spending in percent of GDP for up to 150 EMDEs. Net interest payments are computed as a difference between primary balances and fiscal balances.

However, caution is warranted. First, historically, growth alone has typically not been sufficient to lower debt over extended periods. Periods of high debt – when a debt reduction might be most desirable – have not been accompanied, or followed, by high growth. Being able to borrow may be good for growth, but a hangover of high debt is not.

Third, past episodes of debt reduction through rapid growth typically followed periods in which debt rose quickly after one-off shocks such as wars. This may parallel the debt build-up during COVID-19. However, the debt surge last year followed a steady debt build-up during the 2010s when broader spending pressures and revenue weaknesses, rather than temporary shocks, raised debt.

Fourth, the generally favourable interest rate-growth differentials over the last five decades may dissipate over the next decade as growth prospects dim. Even before the pandemic struck, the global economy was undergoing a decade of slowing productivity growth accompanied by weak investment. The additional damage from the pandemic may further steepen the slowdown in potential output growth.

If both inflation and growth fail as mechanisms to reduce debt burdens in a lasting manner, highly indebted EMDEs may eventually need to resort to debt default or restructuring. Over the past 200 years, the average advanced economy defaulted more than twice on external debt and the average EMDE more than four times. Among 64 large economies, there were at least 68 episodes of domestic debt defaults. These domestic debt defaults were typically accompanied by galloping inflation and significantly worse macroeconomic outcomes.

In addition, future debt restructurings may be more challenging than past ones. The creditor base for EMDE debt has fragmented over the past two decades. In low-income countries, a growing share of debt is held on non-concessional terms and by non-traditional creditors including China. This may increase incentives to settle for shallow debt restructurings but, in the past, these have proven temporary.

How can the global community help?

On occasion, through well-coordinated umbrella initiatives, the global community has been able to help restore fiscal sustainability faster and more efficiently than through normal court processes. Historical examples that coordinated large numbers of debtors and creditors, include the Multilateral Debt Relief Initiative from 2005, the HIPC Initiative from 1996, the Baker Plan from 1989-94, and the Paris Club established in 1956.

More recently, new initiatives have sprung up that have parallels with past umbrella debt relief initiatives. These have included the G20’s Common Framework, among others. But if the post-pandemic EMDE debt crisis becomes systemic, much more will need to be done.