From powering web searches, curating social media feeds, detecting and diagnosing diseases, to driving vehicles and navigating roads, artificial intelligence is as entrenched in our lives as tree roots in a rainforest

The United Nations is both a fascinating playground for artificial intelligence applications and a showcase of AI implementation problems and solutions.

From powering web searches, curating social media feeds, detecting and diagnosing diseases, to driving vehicles and navigating roads, artificial intelligence is as entrenched in our lives as tree roots in a rainforest. It has eased everyday living and opened up possibilities never before imagined in the consumer and commercial realms. In the public sector, too, AI is becoming indispensable. Cyberdefence, policing and traffic control are just some examples.

What if we zoom out further to issues affecting the welfare and security of millions across national boundaries? In other words, how might AI be used in international organisations to help improve lives and protect the environment, among other goals? 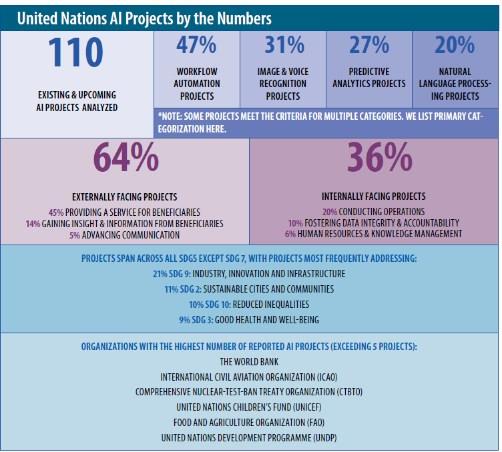 We uncovered emerging trends, technical challenges as well as contextual ones. Some of these are specific to the scale and decentralised nature of the UN organisations; others are more general ethical concerns about the use of AI for society. The insights and lessons we distilled could be invaluable to other international organisations similar in ambitions if not size.

From outer space to shark fins

If AI were a sentient being, it would probably feel like a kid in a candy store amongst the endless possibilities proffered by the UN’s sprawling remit. The UN Office for Outer Space Affairs, for example, was resurfacing space science data with the goal of becoming the one-stop shop for open-source space science data and processing tools. The Food and Agriculture Organisation (FAO) developed a system that uses machine learning to identify shark species from the shape of their fins – a handy tool for port inspectors, fish traders and other users.

Our study covered 110 AI initiatives, including the above. We examined the type of AI technology being used, its level of development, where in the organisation’s value chain it was used, the Sustainable Development Goals (SDGs) addressed, and whether the technology was primarily used with an internal or external focus. We also interviewed project leaders across UN organisations and conducted a survey to learn more about existing and upcoming AI initiatives.

We found that UN organisations primarily used AI in four types of applications: predictive analytics, image or voice recognition, natural language processing, as well as workflow automation. Predictive analytics recognises patterns in data and extrapolates likely outcomes. Image or voice recognition involves identifying consistent objects or characteristics in visual or auditory input. Natural language processing is the perception, analysis and generation of speech or text. Workflow automation covers the digitisation of repeatable activities. Nearly half of the projects we studied belonged to this last category. 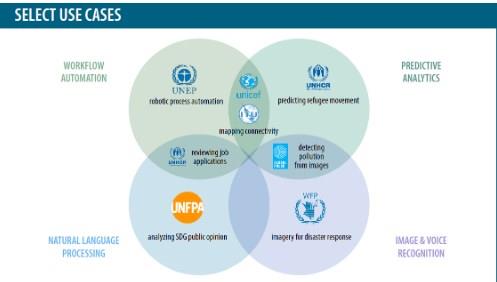 Several common themes emerged from our analysis. First, UN agencies are focused on building the capacity of countries and organisations. This involves putting data and computing structures in place to facilitate future AI projects, such as generating datasets that cover the most marginalised populations.

The second commonality is an emphasis on externally facing initiatives benefitting millions. These may include predicting conditions for food or environmental security and identifying a specific object or species (like at the FAO). Another theme is widespread use of satellite imagery to gain a holistic perspective. The World Bank, for example, uses satellite data and mapping to promote improved land use governance and infrastructure tracking.

Within UN organisations, AI is used to optimise processes, measure organisational culture or facilitate better decision making. For example, the UN Office on Drugs and Crime was mulling AI-powered analysis of trends related to the flow of illicit activities.

But like a large ship that takes time to change course, international organisations tend to face multiple challenges, technical and otherwise, in implementing AI projects. Some of these challenges also plague other organisations – public or private, large or small – trying to integrate AI into their operations. Our study sheds light on some of the problems as well as potential solutions.

“Data is sensitive and hard to share – especially as we work with very vulnerable people – so we focus on public data,” said a member of an AI project we studied. Initiatives in UN organisations often run up against lack of data or its unreliability, or team members having to negotiate sensitive data. The recourse is often to use public data sources exclusively or to use a mixture of public, internal and private sources.

We suggest that organisations facing a data crunch pool their data. There are already signs of cross-organisation and cross-sector collaboration, but a lot more can be done. If more international organisations that serve similar populations share their data, there will be more access points and ways to collaborate. This is what corporations that operate in diversified businesses do, too.

Compared to large tech companies with deep pockets, supranational organisations like the UN have decidedly more modest financial means and often lose out in the race for AI developers. The organisations we studied tried to get around the problem by hiring programmers and others who might have strong technical skills but not in AI.

International organisations could strike up partnerships with tech companies, or tap academics and private sector experts for pro bono services. They could even consider outsourcing work on platforms like Kaggle, where the offer of a relatively small cash prize could attract literally thousands of people to work on a problem.

Given the size of UN organisations – the World Bank alone has more than 10,000 employees – teams working on the AI initiatives we studied were not aware of all the different AI projects across their organisation. There might be an informal network of innovators and AI enthusiasts who were vaguely aware of various initiatives taking place but with little insight on their scope or developmental stage. The result could be duplication of efforts as well as a loss of key institutional insights and knowledge.

One option is to create knowledge hubs that bring together AI teams and make it easy to share knowledge and expertise. These could be internal “innovation units” that meet regularly, or informal cross-organisational working groups that focus on project progress, needs and opportunities while identifying methods to integrate efforts. Some examples that have been created in recent years include the UN Innovation Network for cross-organisational learning, and the Geneva Innovation Movement for cross-sectoral learning.

Leaders that are risk-averse may be reluctant to embrace AI or take ownership of initiatives. They may leave project developers wondering whether their efforts are in line with management’s goals. Doubt could quickly lead to discouragement.

Ultimately, an organisation cannot change its culture without the buy-in of its leaders. For AI initiatives to succeed in international organisations, it is critical to have high-level champions. INSEAD and other leading business schools have shown that, through workshops and training, senior managers are able to gain a sophisticated understanding of AI and its benefits quickly.

Where no organisation has gone before

In addition to the above, UN organisations often grapple with obstacles unique to their values-based remit. For example, some of our interviewees felt that AI-supported decision making might compromise their organisation’s core mission, whether it’s addressing humanitarian needs, security or development. There were also concerns that AI structures and data might reinforce existing biases and inequalities.

The short answer to these concerns? Algorithms are not infallible, but neither are humans. Algorithms worth their salt should make fewer mistakes than humans and free up the latter to work on tasks that can add more value to beneficiaries and the organisation. Evidence of such AI-powered competence can be provided through simulations and experiments.

The longer-term solution is to institute clear governance and process structures for AI projects. Last November, UNESCO (United Nations Education, Scientific and Cultural Organization) helped push through the first-ever agreement among its 193 member nations that defines the common values and principles needed for the healthy development of AI. Even as it advocates for responsible use of AI globally, the UN could set an example by setting standards for itself.

But perhaps the biggest obstacles to integrating AI in international organisations like the UN are budget constraints and employees’ attachment to the organisation’s human-focused mission. Since the UN and many international organisations depend on donors for funding, they tend to stick to the tried-and-tested, avoiding risks like investing in new technologies without immediate payoff that may open themselves to donor criticism.

We suggest that organisations align with progressive donors who value innovation. Moreover, as mentioned above, they could consider collaborating with technology companies and other sources of expertise.

Employees, meanwhile, could be resistant to AI for fear that it undermines the human-focused intent of their work. The best way to convince them otherwise is to show that AI tools can bring about human-centric results, strengthening rather than detracting from the organisational mission. For example, the United Nations High Commissioner for Refugees (UNHCR) created Project ARiN to sort through the thousands of job applications it gets a month. The initiative aimed to not only increase efficiency, but also reduce hiring bias from preference for native English speakers. It also built inclusivity into the process.

Implementing any substantive change in large organisations takes time and persistence. This couldn’t be truer in the case of applying and integrating AI in the UN – call it, if you will, the largest use case of AI in international organisations. Anything that the UN can do, the less constrained, better resourced for-profit organisations should be able to do much more easily. That can only be good news.

*Impact Management & Inclusivity Specialist at the World Economic Forum and post-doctoral researcher at the Geneva School of Economics& Management, University of Geneva,& Managing Director at the Geneva Innovation Movement and Professor of International Management& the Director of the Center for Innovation & Partnerships at the University of Geneva and Roland Berger Chaired Professor of Strategy& Organisation Design at INSEAD
**first published in: knowledge.insead.edu