5 things companies and staff need to learn about hybrid work

Hybrid working is here to stay

Hybrid working will be part of future work patterns, but some companies and employees are struggling to adapt, a new Microsoft report says.

Hybrid working is here to stay.

That’s the key message from Microsoft’s 2022 Work Trend Index, a study of 31,000 people in 31 countries. The report also includes insights from Microsoft 365 platforms and LinkedIn.

Here are the five main findings.

What employees want has changed

Family, personal life, health and well-being now take priority over work. “Perks like free food and a corner office are no longer what people value most,” Microsoft says.

Instead, the top things workers want from an employer – beyond a good salary – are a positive culture (chosen by 46% of survey respondents), mental health and well-being benefits (42%) and a sense of purpose or meaning (40%). Flexible hours also rank highly.

Creative pursuits are increasingly important, and more employees are looking to design their work around these. Microsoft says 70% of Gen Z workers (those born between the mid-1990s and early 2010s) and 67% of millennials (those born between 1980 and 1994) are considering a “side project” or business to earn extra income over the next year. 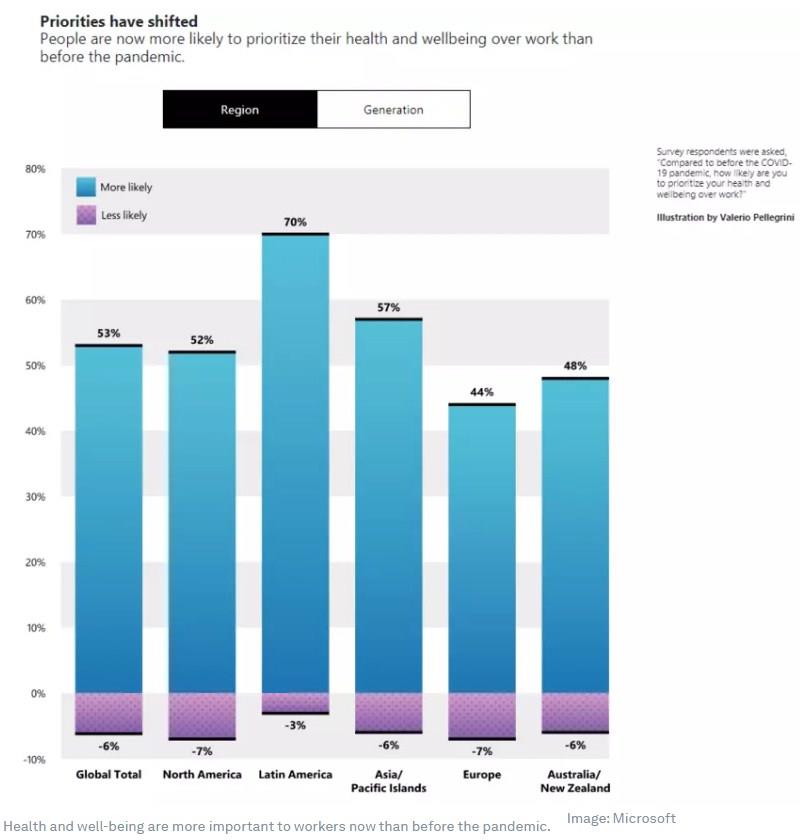 Managers feel stuck in the middle

Half of leaders say their company plans to return to full-time office working this year. However, workers are looking in the other direction, with 52% planning a shift to remote or hybrid working.

That’s why 54% of managers say their company leadership is out of touch with what employees want. Almost three-quarters of managers feel they don’t have the influence or resources to change things for their team.

Managers are the key to unlocking the potential of hybrid work, Microsoft says, so they need to be empowered and trained to manage this transition. 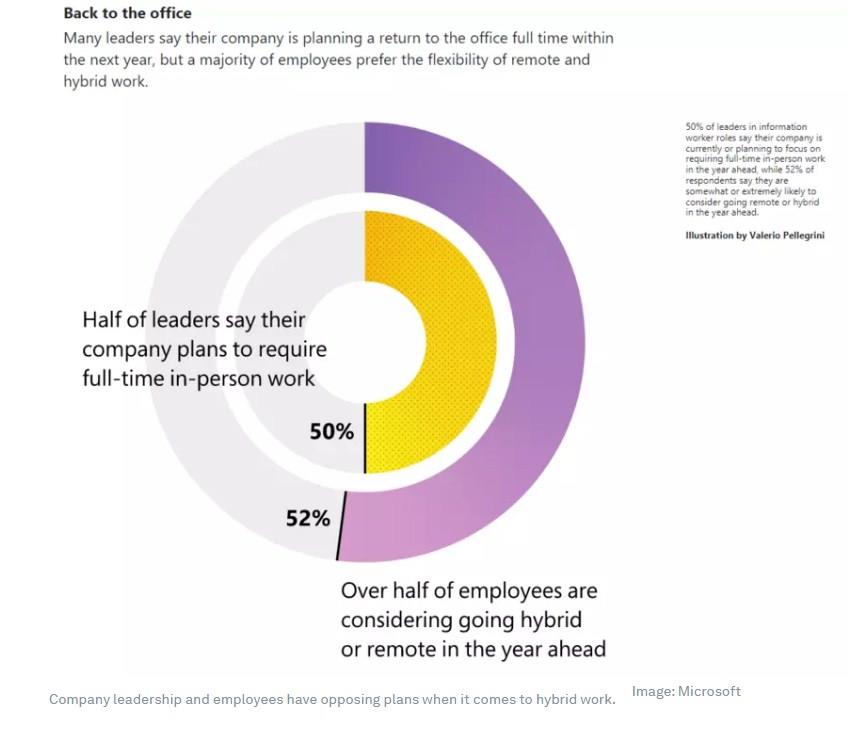 A clearer vision for the hybrid office

Almost four in 10 hybrid workers (38%) say they don’t know when and why to come into the office.

This suggests that business leaders need to “reimagine the role of the office” and establish a clearer hybrid working model. This might include team agreements to define hybrid working. Only 28% of companies have these, the survey finds. 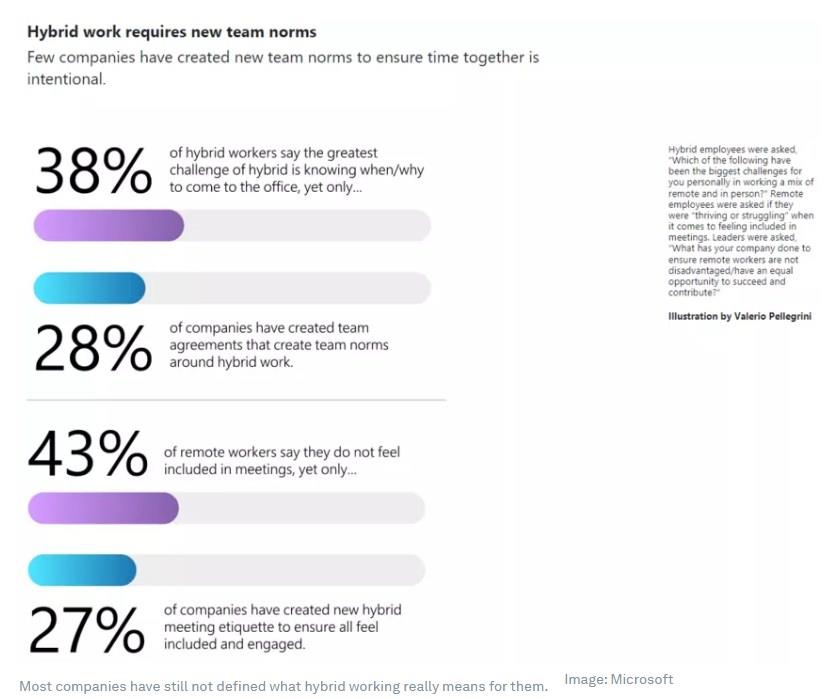 Scale back the endless online meetings

Meetings are eating up our time. For the average user of Microsoft’s video conferencing platform Teams, weekly meetings have jumped in number by 153% since February 2020, while weekly meeting time has risen by 252%. Instant messaging chats are also up by a third.

The end result is longer working days – up by 46 minutes since March 2020. After-hours and weekend work are also growing.

The key message is that “new norms” need to be created around flexible work, Microsoft says, to cut the time spent in meetings and to let workers switch off. 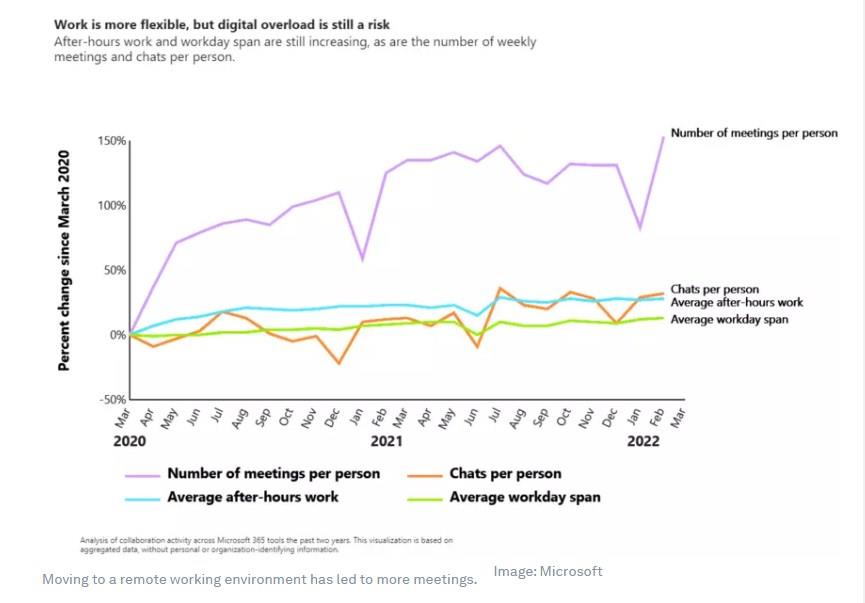 Remote working can be lonely

Half of remote employees and 55% of hybrid staff say they feel lonelier at work than before changing their work patterns. Relationship building is the biggest challenge for leaders in this new normal.

“Employees are ready to stop emailing and start connecting,” the survey finds. Leaders need to recognize this by prioritizing time for relationship building. 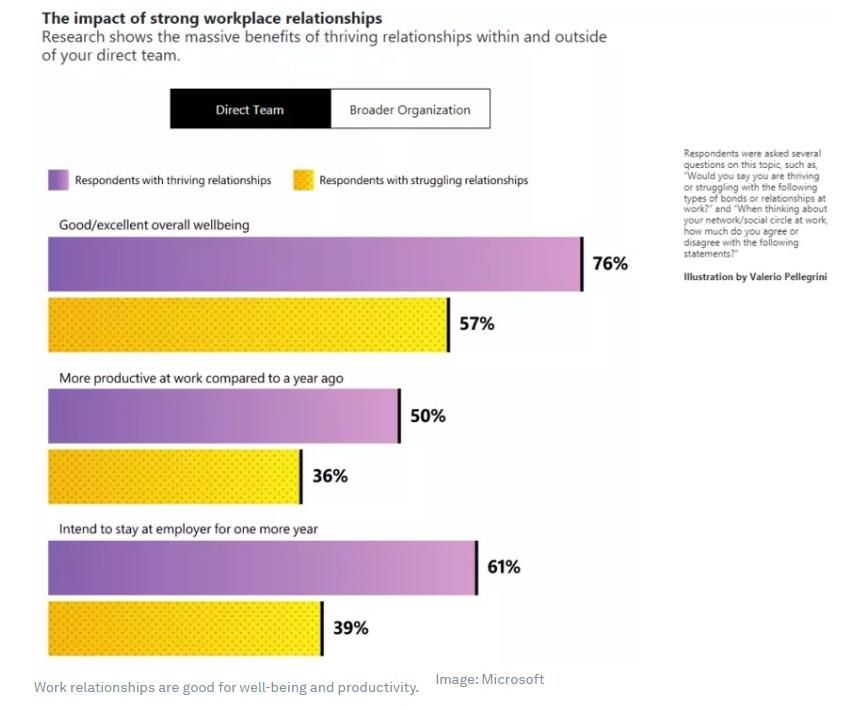 Other studies back up Microsoft’s findings. In an Ipsos survey for the World Economic Forum last year, covering 12,500 employees in 29 countries, two-thirds said they wanted to work flexibly when the pandemic was over. A third even said they might quit if forced to return to the office full-time.

Other research suggests that hybrid working will continue to evolve. A survey by McKinsey last year found that nine out of 10 organizations said they would combine remote and on-site working. But most were only in the early stages of formulating how this might work in practice.