9 ways for Europeans to cut energy bills and help Ukraine

Europeans are being urged to use less energy as a way to cut their bills and help Ukraine.

If everyone in the EU follows nine simple steps to reduce their energy consumption, this could save enough natural gas to heat 20 million homes, the International Energy Agency (IEA) and European Commission say.

The steps are outlined in a report called Playing my Part, and they would help Ukraine by cutting Europe’s reliance on Russian energy. This in turn would reduce the revenues going to Russia and funding the invasion. The EU imported more than $100 billion of energy from Russia in 2021. 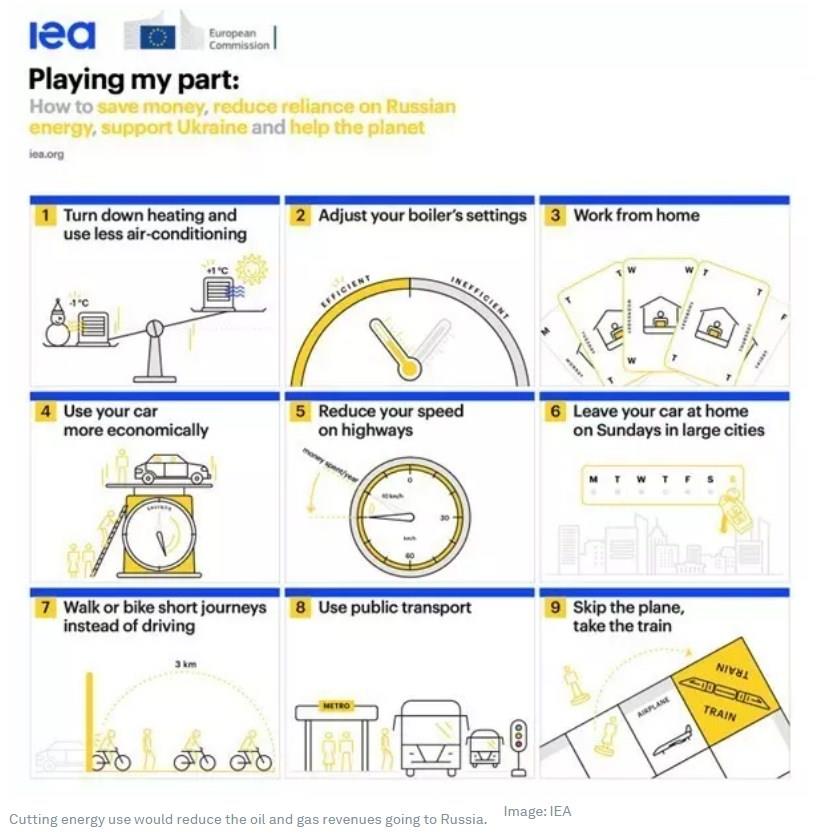 1. Lower the heating and use less air conditioning

Nudging down home thermostats by 1°C could cut energy use for heating by 7%. In EU countries, this could reduce annual energy bills by $73 (€70).

The default setting on boilers could be too high, the report says, and recommends checking the manual to find out how to adjust it. People with a condensing boiler – an efficient type of water heater fuelled by gas or oil – could reduce the amount of energy they use to heat rooms and water by up to 8%, saving around €100 a year.

About 25% of the oil used by cars in the EU is from commuting – but more than a third of the region’s jobs could be done from home. “Teleworking should be encouraged by employers,” the report says.

EU residents could save around €100 a year by sharing car journeys with neighbours, friends or colleagues and setting their car’s air conditioning 3°C warmer (this boosts fuel economy). On most car trips in the EU, there is just a sole driver with no passengers.

Reducing average speeds on motorways by 10 kilometres an hour could cut €60 a year off fuel bills. “Driving too fast is inefficient for the car engine and wastes fuel,” the IEA says.

Paris, Milan, Edinburgh and Brussels are some of the places that have used car-free Sundays to promote public health. Leaving the car at home for the day could add up to a saving of €100 a year.

After Russia’s attack on Ukraine, our new Plan shows how to ease oil market strains & reduce pain from high prices.

Governments can lead the way. But by taking action voluntarily, citizens & companies can make an impact while also saving money.

For short journeys, walking or biking can cut air pollution and congestion, while also making people healthier. This could also save people more than €55 a year. Fourteen of the EU’s 27 countries offer at least one tax incentive or subsidy to help with the purchaser of a bike or electric bike.

Use public transport to get to work if you can. Jobs with flexible start and end times can help workers find space on off-peak public transport. Public authorities can also help by offering discounted fares on bus and rail systems.

9. Skip the plane, take the train

High-speed trains are a good substitute for planes on journeys of under 1,000 kilometres, the report suggests. For longer journeys, night trains are an option. “Employers should encourage train journeys instead of short-haul flights,” the authors say. About 5% of the EU’s plane journeys could be done by train instead, they add.

All this could help avoid an energy supply crunch

Immediate action by governments and citizens to cut energy use would reduce the risk of a major supply crunch, the IEA says. It would also “reduce the price pain” for consumers around the world as energy prices soar.

In January and February, homes in advanced economies spent an average of 35% more on oil for transport and heating than a year earlier, the IEA says. For emerging and developing economies, the rise was 55%.

The Playing my Part report follows two recent 10-point plans from the IEA to reduce Europe’s reliance on Russian gas and oil.