3 action steps to create gender and racial equity at work

These are to dig deeper to challenge assumptions, bridge the gap between women of different backgrounds, and advance women across the organization

“You may feel like you’re powerless to make change, but everyone can make change within their own sphere of influence. Focusing on action, and accountability for those actions, is something we care a lot about.”

Tina Opie was wary of Beth Livingston when they first met more than a decade ago.

“I had to unpack the fact that I had been stabbed in the back by so many white women in the workplace that when I saw this white woman, Beth, practically skipping up to me, I was distrustful,” Opie said.

After reaching out to a mutual friend who attested to Livingston’s trustworthiness, Opie challenged her own assumptions and began doing the real work of getting to know Livingston. Their professional relationship blossomed into a friendship, and they have written a new book on how to tear down the barriers that prevent women and marginalized groups from thriving in business.

Shared Sisterhood: How to Take Collective Action for Racial and Gender Equity at Work draws from social science, organizational psychology, management research, anecdotal evidence, and the authors’ own experiences to explore the myriad ways in which racism, sexism, and xenophobia have persistently held back women and minorities at work. More importantly, the professors offer three action steps that people can take to change themselves and move their organizations toward greater equity:

1. Dig into your own assumptions about racioethnicity, gender, and power.

2. Bridge the divide among women of different racioethnic groups through authentic relationships.

3. Act to advance all women throughout the organization and beyond.

“Everyone can do something,” Livingston said. “You may feel like you’re powerless to make change, but everyone can make change within their own sphere of influence. Focusing on action, and accountability for those actions, is something we care a lot about.”

Livingston and Opie joined Wharton management professor Stephanie Creary for her Leading Diversity at Work podcast series to discuss the book’s themes and what they mean by the title of “Shared Sisterhood.” (Listen to the podcast above. Find more episodes here.)

The three professors agreed that issues of diversity, equity, and inclusion have been pushed to the forefront in recent years, spurred largely by the Black Lives Matter movement. Business leaders can no longer dismiss racial and social injustice as problems outside of the workplace, yet so many well-intentioned employees and managers don’t know how to address them. 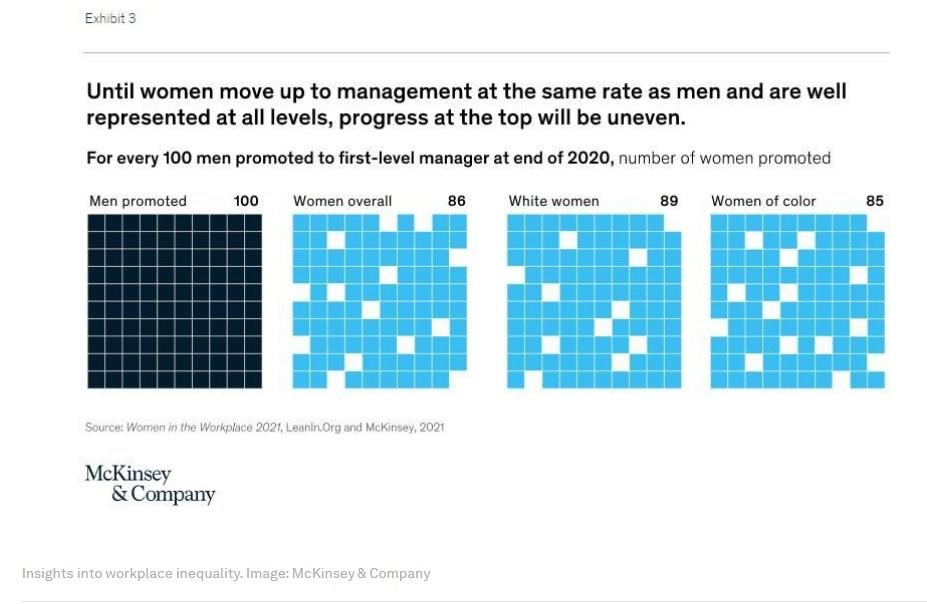 That’s where the sisterhood comes in, Opie and Livingston said. They believe it takes commitment and action from every individual to achieve the kind of results that benefit the entire system. Even the word “sisterhood” was chosen intentionally because it challenges the masculine stereotype of professionalism and success, they noted.

“I feel like it’s a radically optimistic book,” Livingston said. “We are not just going to detail what the problems are around racial exclusion at work and racism at work and the history of mistrust between Black and white women in the United States. We’re going to tell you some things you can do about it. And that, to me, is radically optimistic.”

‘This is a crisis moment’

Opie hopes readers will follow the three steps prescribed in the book because she feels a particular urgency for change right now. Too many minority women are metaphorically “dying” in workplaces that don’t let them succeed.

“The thing that I would want to leave people with is that action is what we need. It’s too old to say, ‘I really want to get involved, but I don’t know how.’ There are so many resources out there,” she said. “At the end of the day, I’m saying let’s have some urgency. My children are depending upon you as a CEO being equitable and just. So please, move forward.”

Livingston agreed, saying equity is so long overdue that it’s not practical to wait for another 10 years of data analysis to formulate solutions.

“We should be trying all the things we can to improve equity because this is a crisis moment, and it requires all hands on deck,” she said.

In their conversation, Creary underscored the book’s call for collective action and the notion of sisterhood because people in a competitive setting such as business often fail to understand that what is beneficial for one person is beneficial for all. She said that she emphasizes that point when she is teaching her undergraduate and MBA students at Wharton, especially for the ones who hope to become managers and executives.

“It’s such a hard thing for so many people to embrace, but our scholarship has said this,” Creary said about research on diversity, equity, and inclusion.

Opie and Livingston know that their guidance — dig deeper to challenge assumptions, bridge the gap between women of different backgrounds, and advance women across the organization — is easier said than done. But they are also living proof that it can be done.

“You know, I share stories about how I have stereotyped other people and groups that I’m not a member of, and we like to lie to ourselves that we don’t have these biases,” Opie said. “But I say they’re like birds. They will fly through your mind. Just don’t let them nest there or crap on you.”

*Writer / Editor, Wharton School of the University of Pennsylvania
**first published in: www.weforum.org