What China’s Cyber-Cash Advantage Means for the Global Economy

The rise of cryptocurrency could threaten the dominance of the US dollar and cost the United States trillions in increased debt financing charges.

by Aly Madhavji and Mansoor Madhavji*

The People’s Bank of China (PBoC) is significantly ahead of other central banks in developing a digital currency. While no official rollout has been scheduled, an early release of a digital yuan has the potential to shift the balance of global financial power away from the dollar.

After largely ignoring the launch of Bitcoin, central banks around the globe have had a much different response to the recent unveiling of Facebook and J.P. Morgan’s cryptocurrency, Libra. A greater priority is now placed on developing their own digital money.

Unlike typical cryptocurrencies, Libra is a stablecoin – pegged to a group of low-volatility assets in multiple currencies. This promises to solve the issue of volatility which has plagued cryptocurrencies, while making payments quicker, cheaper and easier. Its development means that for the first time, central banks are faced with an innovation that could not only revolutionise the way money supply works but, if adopted as a widely used payment method, has the potential to undermine national sovereignty and economic stability.

Since Libra’s launch there has been growing concern over who will control money in the future. Increasingly central banks are coming to the view that by introducing their own form of digital currency, they can address efficiency and cost problems and maintain control over their country’s monetary policy.

To this end, a global group of central banks from the United Kingdom, the eurozone, Japan, Sweden and Switzerland assisted by the Bank for International Settlements (BIS) are pooling their research and experiences in the pursuit of a central bank digital currency (CBDC). The US Federal Reserve, which has been reticent about entering the digital money sphere, has also said it was “advancing its understanding” of CBDCs as lawmakers in the United States raised concerns that not developing a state digital currency would place the primacy of the US dollar in jeopardy.

Analysts have also been uneasy about the US’ apparent reluctance to move ahead with a digital money strategy. When regulators acted to block the roll-out of Libra last year, RBC Capital Markets warned clients that if crypto innovation was not encouraged, a new digital currency set to be released by the PBoC could internationalise the renminbi and challenge the supremacy of the US dollar.

China: Leading the way to a CBDC

China’s CBDC research started in 2014 and is at least four years ahead of other central banks. Its development has been further accelerated by Libra which PBoC Director of the Research Bureau Wang Xin sees as a threat to financial stability.

China’s goal has been to protect the integrity of the two-tiered monetary issuance and circulation system which would be achieved with the digitisation of the renminbi as a stablecoin, backed 1:1 by fiat reserves. Most significantly, it creates a new public infrastructure for payments and the bank has now completed top-level design for what will most likely be an electronic version of the renminbi, to completely replace physical cash for consumer payments.

While no timelines have been issued for the official rollout, the PBoC has partnered with banks and telecoms to pilot the initiative in Shenzhen and Suzhou in 2020 and reports suggest the “processes of top-level design, setting industry standards, developing potential functions and integration testing,” were nearly complete.

The deputy director of PBoC’s payments department, Mu Changchun, has said that China’s aim in pursuing a CBDC was to protect monetary sovereignty and legal currency status from corporate cryptocurrencies like Libra, and to help improve the effectiveness of their monetary policy by mapping out a more comprehensive picture of all individuals and businesses across China.

However, the affects may run much deeper. As the worlds’ largest exporter, China accounts for over US$2 trillion worth of goods exported annually. If the digital renminbi emerged as a viable option in international trade – or even just trade with China – it could internationalise the currency and reduce demand for the US dollar. 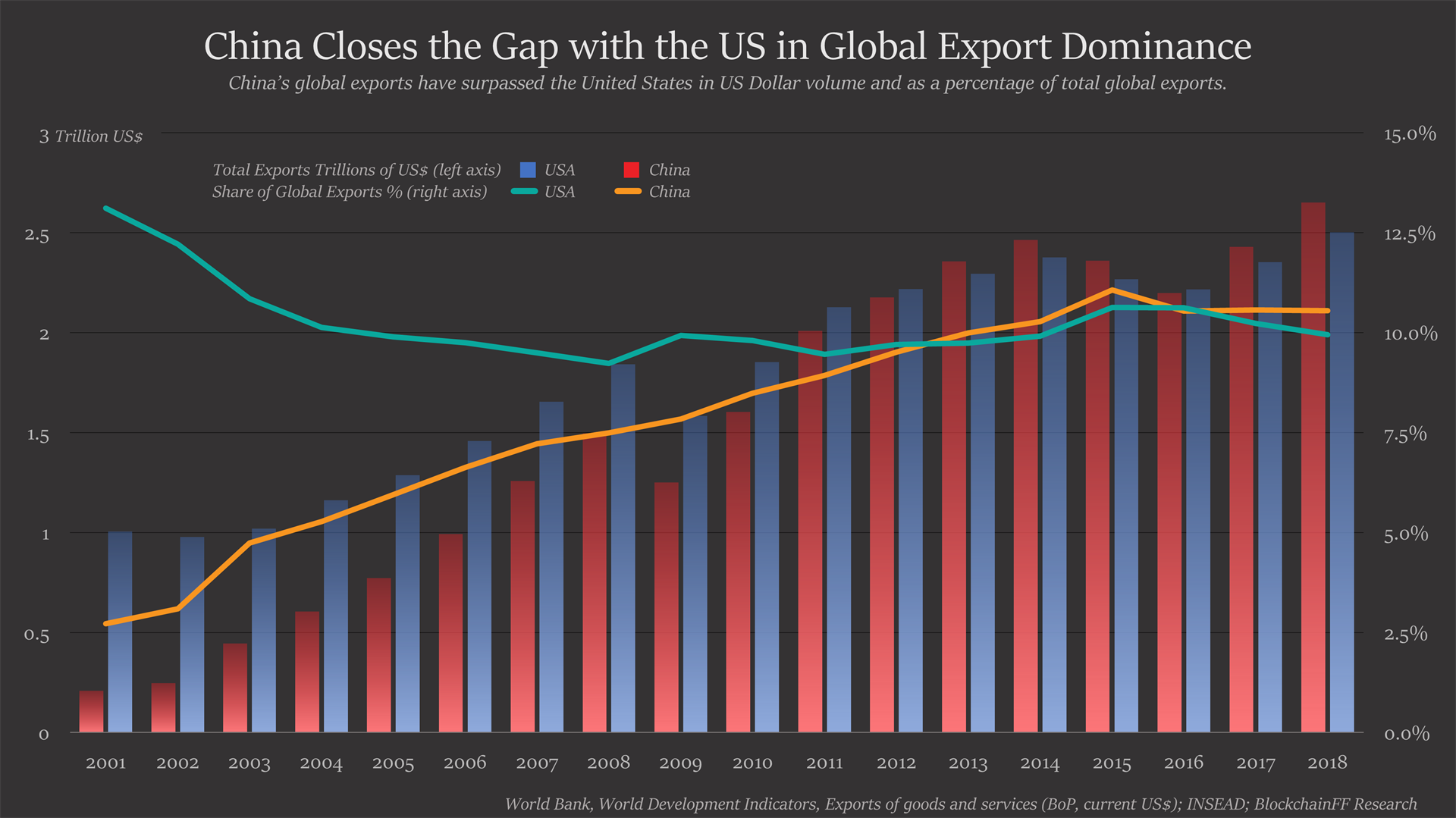 The idea that a new hegemonic cryptocurrency could dampen the domineering influence of the US dollar is not new. During his address at the Jackson Hole symposium of central banks in 2019, then Governor of the Bank of England Mark Carney suggested that a new digital reserve currency could address a series of failings within the current structure of the global financial system. He noted the excessive dominance of the US dollar in trade and financial transactions – the US accounts for 15 percent of global GDP and 10 percent of global trade, yet half of all trade invoices are in US dollars. And he argued that replacing it with a global digital alternative would end a savings glut that had resulted in 10 years of low inflation and ultra-low interest rates.

“(As) the deficiencies of the international monetary and financial system have become increasingly potent. Even a passing acquaintance with monetary history suggests that this centre won’t hold,” Carney warned.

Currently struggling countries are encouraged to self-insure by accumulating US dollar-denominated assets thereby making it difficult for central banks to generate effective stimulus for their economies. The emergence of China’s renminbi or another currency as an alternative to the US dollar could help to erode the dollar’s dominance.

As well as undermining the country’s ability to impose sanctions on other markets, any weakening of the dollar’s status as the go-to currency for international trade would have an impact on the US economy.

Global demand for the currency has allowed the US to refinance US$23.3 trillion of debt at low rates, reducing the cost of borrowing for US government, companies and individuals. If a digital currency issued by another country (or organisation) were to gain widespread adoption, it could drive up debt refinancing, costing the US government trillions in interest charges on debt.

Currently Chinese capital controls makes trading in renminbi is difficult, forcing payments to generally occur in US dollars. A digital renminbi is more accessible and efficient for international trade. China has already sought to internationalise the renminbi with yuan-denominated oil futures – which comprise 14 percent of global activity in similar futures. Shifting even a fraction of the international demand from the US dollar could loosen its grip on global dominance.

A digital renminbi could assist with this, and if it came to prevalence, could seriously challenge US dollar hegemony. At the very least, it will provide a credible alternative for emerging nations, further cementing and expanding China’s sphere of influence in the world.