How Covid-19 Raises the Digital Stakes Even Higher

When Covid-19 started to threaten global health services, nations began locking down and managed to get work, local government and education online very quickly – within two weeks or so

"Now is the time for firms to invest in digital transformation."

When Covid-19 started to threaten global health services, nations began locking down and managed to get work, local government and education online very quickly – within two weeks or so. This was possible thanks to the digital revolution that we have experienced, especially over the past ten years.

At a recent “Navigating the Turbulence of Covid-19” webinar, INSEAD Senior Affiliate Professor of Strategy Annet Aris described how far we have come and the broad impact Covid-19 has had on our digital dependence. As a professor, board director and a parent, she said, “I had a unique opportunity to look at what’s happening over the past months, from an academic perspective, from a business perspective and a societal one.” With our increased reliance on the non-physical world, the Covid-19 crisis has accelerated the digital transition of our societies, industries and companies.

This acceleration raises the stakes considerably. Due to the winner-take-all nature of the digital economy, there is even less of a middle ground between market dominance and utter destruction. Aris described the steps that leaders should start taking right away to improve their chances of reaching the former rather than the latter.

Although we have been able to shift an enormous amount of everyday life to the digital sphere – work, education, shopping, medical appointments, staying in touch with family and friends, grieving and, of course, tracking Covid-19 – it hasn’t been perfect as we need to address privacy issues and other worries around data.

“Concerns regarding privacy is like the genie out of the bottle with more and more countries using Covid-19 tracking and tracing apps which can tell you where you have been and what you have done. And the explosion of fake news and conspiracy theories might have actually greatly increased the panic or affected the economic crisis, which has deepened dependency on the internet giants for information,” Aris explained. There are also concerns about new forms of internet fraud and security breaches with the wealth of data we are now generating.

None of this would have been possible without the linear growth of the internet/mobile sector and the incredible exponential growth of computational power.

She said, “The development of artificial intelligence and deep machine learning only took off in the last five years. In turn, this enabled the Internet of Things, blockchain applications and robotics…and we don’t realise that the IQ of the virtual assistants in our mobile phones has doubled in the last few years.”

Aris explained that in the rapid expansion of digital, there was a clear difference between B2C (business-to-consumer) and B2B (business-to-business) industries. Consumers, often spurred on by early adopters who were excited by new and improved tech, are more likely to embrace the move to digital quickly as compared to companies that are entrenched in certain ways of working with each other. Companies’ advertising spend lags individual media consumption’s shift to digital by three to five years, she said. 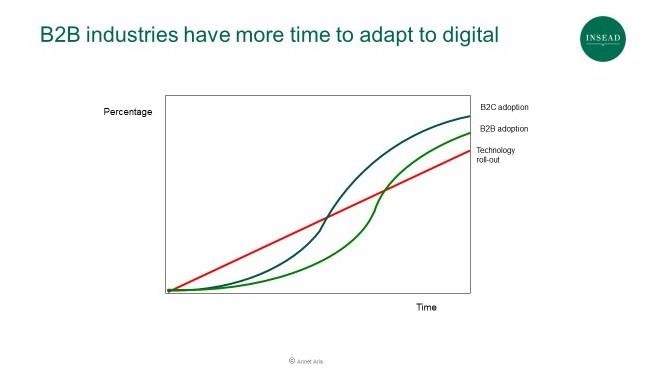 Firms could have viewed this lag as extra time to adapt in the past, but no longer. “The impact of Covid is that it’s digital disruption on steroids. The usual adoption time by consumers has been stepped up quite significantly. But even more so by companies. Companies have been thrown in the ice cold water and had to learn to swim fast with digital transformation.”

The big challenge for firms is organisational resistance to change. And the bad news, Aris said, is even more pressure on profits (which often dwindle with digital) and further polarisation between corporate winners and losers with the increased speed of disruption.

“This means that you have to keep investing in digital to get your house in order and your legacy IT up to par. You have to be able to fund IT investments and to make sure you have enough data for machine learning and artificial intelligence and you have to keep them continuously experimenting and growing your business,” Aris emphasised.

Aris described the first important lesson of this crisis for supervisory boards: “You’re in real trouble if you haven’t done your homework” and don’t have the right management in place.

The first phase was one of crisis communications, circling the wagons to ensure that the firm was intact. Then the second phase was centred on the question, “How can we cope with the business decline?” Firms drew up scenarios and considered short-term measures. At this point, Aris was clear that NEDs mustn’t succumb to the lure of micromanagement. The third phase, where most firms are now, involves more clarity with the debate of “How can we strengthen our market position post-Covid?”

Because internet giants are often the clear winners (with no prizes for second place in digital), what can be done about SMEs in the post-Covid world? Aris suggested that regulations should protect these firms, which may employ up to 70 percent of a nation’s workers. She referred to the Dutch agricultural policies that propelled the Netherlands from a country of small farms to one of the world’s largest agricultural producers.

“I do think that this is a very important role of government to help SMEs. I compare it to what the Netherlands did 20 or 30 years ago with the agricultural sector which by now is the most modern and nearly the largest agricultural exporter in the world, almost. They sent a lot of advisers to all the individual farms to make sure that they were aware of the newest techniques and helped them to jointly rearrange their land in a more economical way,” she said. Intervention at the skill level for SMEs can protect them as the race towards digital increases.

Transformation is a fundamental change, not just a few tweaks. Aris said, “A digital organisation is not just moving to Zoom, it’s about creating a whole machine” behind the scenes that allows collaboration and the optimal use of a firm’s data.

Measuring the ROI of digital transformation is no mean feat, especially as this kind of investment doesn’t appear in traditional asset columns on spreadsheets. Understanding your own business will allow you to create predictive indicators (around visitors or usage) to replace traditional financial numbers (generally backward looking).

“Digital and hierarchies don’t go together. It’s not something you can use, you know. We have seen companies love social networks which have not been used by employees because people didn’t believe in them. You have to create the belief and the experience from the grassroots. People have to notice it works, it works better, and only then do they start adopting it.”

*Senior Affiliate Professor of Strategy at INSEAD and a board member of Rabobank Group in Utrecht, ASML N.V. in Veldhoven, Randstad N.V. in Diemen, ASR Nederland N.V. in Utrecht and Jungheinrich AG in Hamburg
**first published in: knowledge.insead.edu

EU climate law agreement: Council did not give in

Last night, the negotiators of the European Parliament and Council reached a provisional political agreement on the objective of a climate-neutral EU by 2050 and a collective net greenhouse gas emissions reduction target of at least 55% by 2030 compared to 1990

Li Shufu is pulling the strings at Volvo, Mercedes and Lotus

Will carmaker Volvo get a stock exchange listing in Stockholm, or may be in Amsterdam, as Bloomberg news agency claims?