There is a detectable “human fingerprint” on decreasing rainfall over the US, central Asia and southern Africa, according to results

“We find that since 1950, human-produced greenhouse gases and particulate atmospheric pollution have influenced global changes in temperature, precipitation and regional aridity in two distinct ways. These two human ‘fingerprints’ are statistically identifiable in observations.”

In addition to increasing greenhouse gas emissions, aerosols released by human pollution and large volcanic eruptions have also been “major contributing agents” to global drought patterns through the industrial era, the research says.

The findings “tackle the problem of identifying the human influence of drought patterns across the world”, a climate scientist tells Carbon Brief.

Droughts are among the most expensive weather-related disasters in the world (pdf), affecting ecosystems, agriculture and human society.

But understanding how climate change is affecting drought risk at a global scale can be fraught, explains Dr Andrew King, a climate extremes research fellow at the University of Melbourne. King, who was not involved in the new paper, tells Carbon Brief:

“It is difficult in many regions of the world due to the short observational record coupled with the prolonged nature of droughts. Unfortunately, this yields relatively few events to analyse.”

For the new study, published in Nature Climate Change, scientists made use of an emerging technique in climate science known as “human fingerprinting”. Lead author Dr Celine Bonfils, a physicist at the Lawrence Livermore National Laboratory, explains to Carbon Brief:

“The main goal of fingerprinting research is to separate natural and human influences on global climate. The climate that we are experiencing at any point in time is influenced by many factors. One factor is the internal ‘noise’ of Earth’s climate – purely natural fluctuations, such as El Ninos and La Ninas. Climate is also impacted by ‘external’ factors that act at different paces and places.”

Important human influences include greenhouse gas emissions and polluting aerosols, says Bonfils. Important influences not caused by humans include natural swings in the Earth’s climate and large volcanic eruptions, which also cause aerosols to be released.

Using climate models, the scientists searched for a human fingerprint on global drought and rainfall patterns from 1860 to 2019.

“We find that since 1950, human-produced greenhouse gases and particulate atmospheric pollution have influenced global changes in temperature, precipitation and regional aridity in two distinct ways. These two human ‘fingerprints’ are statistically identifiable in observations.”

The scientists found the first human fingerprint on intensification of patterns of drought and extreme rainfall – also known as “wet-dry patterns” – seen worldwide since 1950.

The maps below show local anomalies in rainfall (top) and the “climate moisture index” (CMI; bottom) from 1860 to 2019 across the globe. (The CMI is an aridity indicator based on rainfall patterns and the relationship between temperature, rainfall and evaporation.) On the maps, brown shows drying while green shows increases in rainfall and moisture. 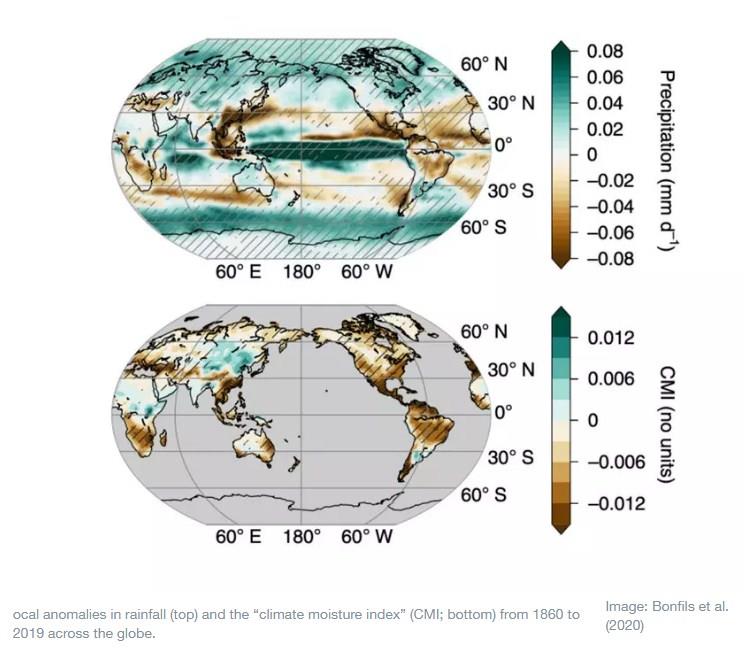 The maps show how the world’s continents, on the whole, have been drying since the mid-19th century.

Areas seeing large decreases in rainfall include central Asia, including Thailand, Indonesia and eastern China, as well as the US, including California, according to the results.

The changes are “largely driven by multidecadal increases in greenhouse gas emissions”, the scientists say in the research paper. Bonfils adds:

“Manmade sulfate aerosols – the tiny particulate pollutants from combustion processes – have a secondary role in forcing these relationships. By reflecting the sun’s light back to space, these manmade aerosols have cooled the planet and partially offset the greenhouse gas-induced warming. The natural aerosols emitted by volcanoes have also contributed in similar ways, but only for one to three years after each eruption.”

The ITCZ is a huge belt of low pressure that encircles the Earth near the equator. It governs the annual rainfall patterns for much of the tropics, making it an important feature of the climate for billions of people. Bonfil explains:

“The most intense precipitation on Earth occurs in the ITCZ. This tropical rain belt is formed where the trade winds from the southern hemisphere and from the northern hemisphere converge. Their combined air masses meet, rise up into the atmosphere and condense, producing intense rainfall.” 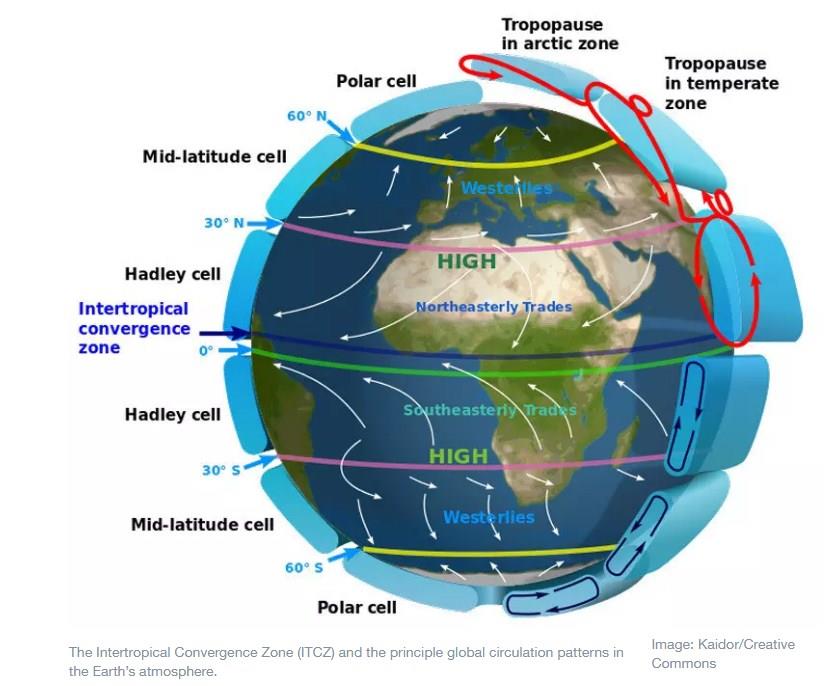 The ITCZ wanders north and south across the tropics each year, roughly tracking the position of the sun through the seasons.

The new research finds that human influences have affected the movement of the ITCZ. Up until the 1980s, the governing influence was human-caused aerosols, says Bonfils:

“The second and more subtle ‘fingerprint’ captures a temperature contrast between the northern and the southern hemispheres, mainly controlled by the cooling influence of manmade particulate pollution emitted from Europe and North America up until the 1980s. This temperature contrast moved the tropical rain belt [ITCZ] southwards, away from the cooler northern hemisphere, causing more rainfall over the western US and less over the Sahel and India.”

After 1980, however, human-caused warming became the dominant influence, she says:

“For both of these reasons, the tropical rain belt [ITCZ] shifted back northward after 1980, bringing less rainfall to the western US and more to the Sahel.”

The results help to explain the complex changes in global drought patterns seen over the past century, says Bonfils:

“We found that the major contributing forcing agents of this intertwined mash-up of fingerprints are the steady increase in greenhouse gases, the complex temporal evolution of particulate pollution emissions and volcanic eruptions. All of these forcing agents must be considered together in order to fully explain the observed simultaneously varying changes in temperature, precipitation, and aridity.”

The study “tackles the problem of identifying the human influence of drought patterns across the world”, adds King:

“This work will help inform projections of drought under climate change as our greenhouse gas emissions continue while our aerosol emissions fall in many regions.”

The research also highlights the importance of polluting aerosols in controlling drought patterns, says Dr Craig Poku, a postdoctoral researcher at the University of Leeds, who was not involved in the study. He tells Carbon Brief:

“[This study] links aerosol emissions and their indirect effects on climate to the changes in aridity. The results that they show highlights the importance of this link, demonstrating why aerosol emissions should be considered more often for this line of research.”