The gains from private market investing are best understood relative to public benchmarks. But there has been no way to compare the two in currency terms – until now.

One of the main reasons that investors allocate capital to private markets is to achieve a return in excess of similar public market investments. The idea is that investors can generally attain their desired exposures to macroeconomic, sectorial, geographical and other common return factors (betas) more cheaply via public markets.

For example, since an investor could invest in the Russell 2000 much more cheaply than through building a similar private equity portfolio, investors should only be interested in the latter to the degree they believe it will outperform the Russell 2000.

We set out to develop a measure of the relative performance of a private market investment in actual currency. We call our measure ‘Excess Value’ and explain it in detail in a new white paper. This project is a joint effort of our two organisations, one a leading private market asset manager (Landmark Partners) and the other a leading institutional investor in both public and private markets (NM PERA).

A conceptual description of the Excess Value method can be seen in the following example:

Assume someone invests $100 in a private equity fund and the appropriate benchmark is the Russell 2000 (e.g. the fund’s mandate is to invest in similar industries, similar company sizes, and with similar leverage). The investment increases in value by 15 percent annually and all value is distributed at the end of Year 5. The distribution will be $201, or $100 compounded at 15 percent annually, for a $101 profit. At the same time, assume that the Russell 2000 returns only 10 percent per year. Had the $100 been invested in the Russell 2000 instead of the private equity fund, the final value would have been $161, or $100 compounded at 10 percent annually, for a $61 profit. The difference between the $101 profit achieved by the private equity fund and the $61 profit that would have been achieved via the public market alternative is what we call Excess Value. In this case, that value is $40.

The table below shows our example investment, together with Excess Value calculated at the end of each year of the investment’s life. The table also shows what we call Beta Value, which is simply the gain that the investor would have achieved had they invested in the public market benchmark instead of the private market investment. In year 5, that is the $61 profit that would have been achieved by investing $100 in the benchmark.

Calculating Excess Value becomes more complex for the more elaborate cash flow streams typical of real-world private market investments. Specifically, once an investment makes multiple distributions rather than one single-bullet payment, a mechanism must be put in place to ‘freeze’ the Excess Value so it is measured only when capital is at risk. This is necessary for using Excess Value both as a performance measurement and compensation tool. Our white paper contains detailed guidance on how ‘freezing’ can work in practice.

For even greater precision in determining compensation, Excess Value can be further divided into what we call Alpha Value and Interaction Value. The former corresponds to the influence of the fund manager, while the latter reflects a combination of managerial and market-based value-add.

Alpha Value is simply the net present value (NPV) of the entire investment from the date of inception, using the benchmark performance as the discount rate. In our example, Alpha Value is simply the NPV of a $100 contribution in Year 0 and a $201 distribution in Year 5, discounted at the 10 percent annual rate of the benchmark. The result is $25. In practical terms, this $25 represents the value to an investor at Year 0 of a $100 private market investment that would return 15 percent annually over five years, when the alternative is a public market investment that would have returned 10 percent.

The difference between the $40 of Excess Value and the $25 of Alpha Value is what we call Interaction Value. This $15 is value generated because the $25 of Alpha Value that the manager created was invested when the public market equivalent increased in value by 10 percent annually. In other words, this $15 comes about through the interaction of the Alpha Value produced by the manager and the Beta Value produced by the public benchmark. The following chart shows the development of all three sources of value for our example investment: 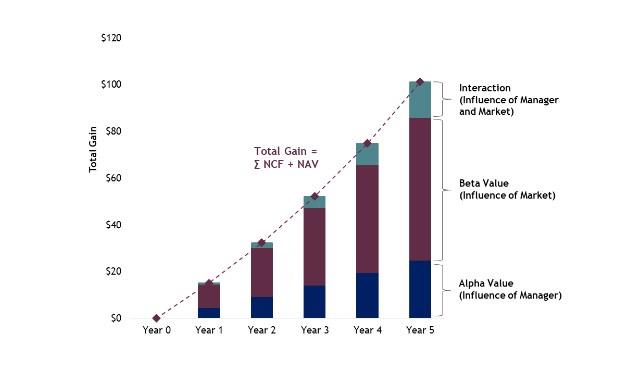 It is our hope that private market practitioners and academics alike will find the Excess Value method to be a useful tool for performance measurement and for thinking about compensation in a new way that better aligns with the goals of investors for their private market portfolios.