More women have lost their jobs due to the impact of the coronavirus crisis than men, new research has found

The report COVID-19 and gender equality: Countering the regressive effects, from McKinsey Global Institute, estimates that women make up almost two-fifths of the global labour force but have suffered more than half of total job losses from the crisis.

More women have lost their jobs due to the impact of the coronavirus crisis than men, new research has found.

The report COVID-19 and gender equality: Countering the regressive effects, from McKinsey Global Institute, estimates that women make up almost two-fifths of the global labour force but have suffered more than half of total job losses from the crisis. That’s left them 1.8 times more vulnerable to the pandemic’s impact than men.

One reason for this is that the virus has increased the burden of unpaid care for children, the elderly and the sick, which is disproportionately taken on by women. The situation is compounded by existing gender inequalities.

Urgent action is needed to prevent deepening divisions between male and female employment opportunities and to maximize global GDP, the report says. 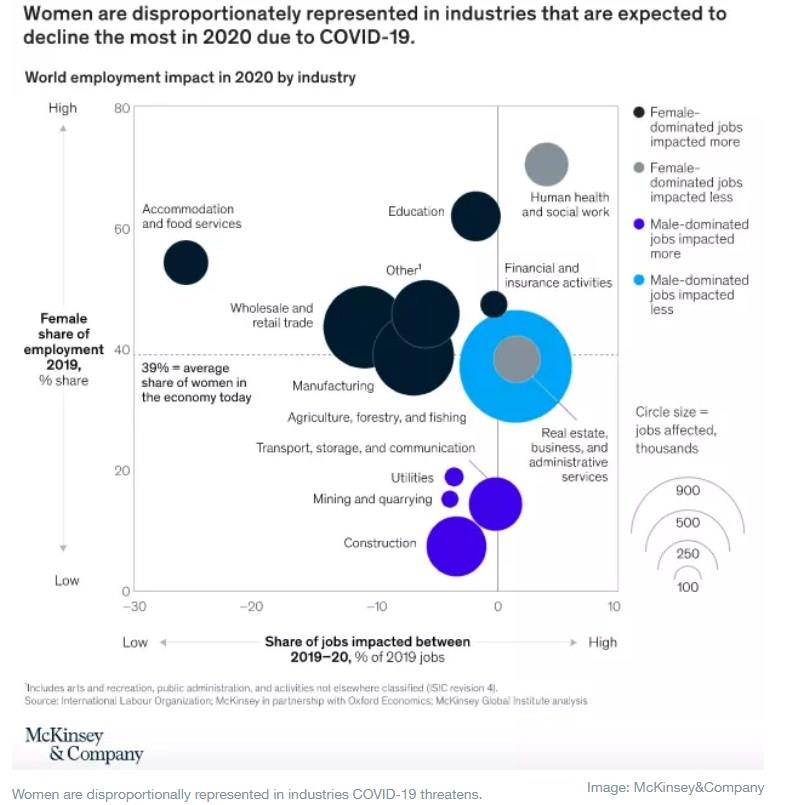 Of course, the virus doesn’t specifically target women – but it does impact some parts of the economy more than others. McKinsey notes that men and women tend to cluster in specific occupations, leaving women more vulnerable to the disruption caused by the pandemic in both developed and developing economies.

Women’s jobs are at 19% greater risk than men’s, the report estimates. While women account for 39% of the global workforce, they are over-represented in three of the four most in-decline parts of the global economy: accommodation and food services (54%); retail and wholesale trade (43%); and services such as arts, recreation and public administration (46%).

That said, labour market dynamics differ between countries and regions, as do attitudes to women’s employment and access to the labour market. The report found that women were disproportionately represented in industries affected by COVID-19 in places including Nigeria, for example, while in other countries such as France men were more affected.

Closing the gender gap will have a huge impact on the economy. The World Economic Forum’s Global Gender Gap Report 2020 shows reducing gender inequality boosts an economy’s growth, competitiveness and readiness for the future.

The McKinsey report supports these findings. Researchers modelled three scenarios – “do nothing”, “wait to take action” and “take action now” – to measure the impact gender inequality caused by the pandemic could have on economic performance post-COVID-19. 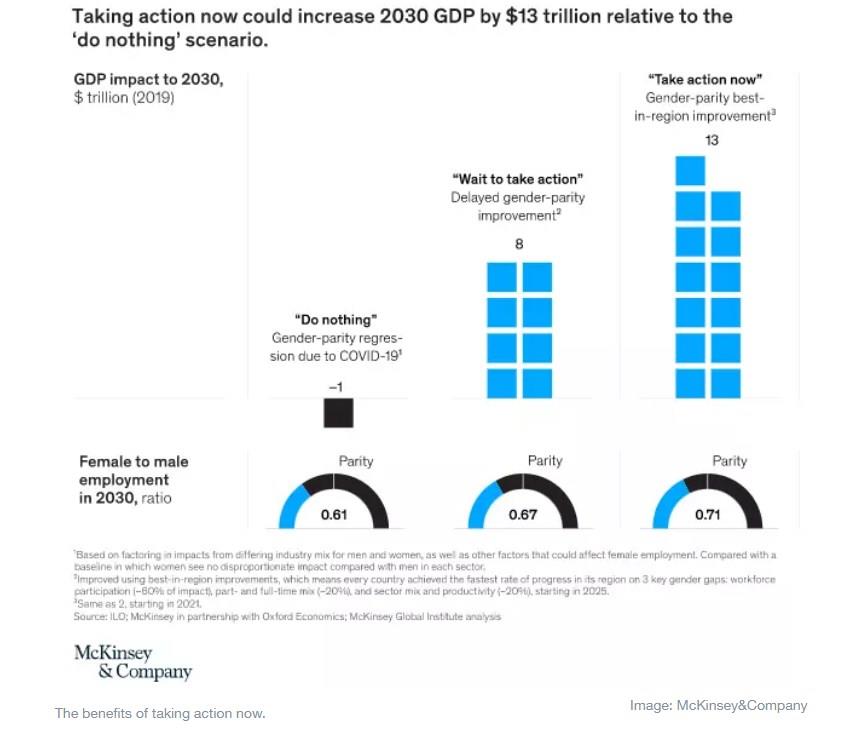 Under the “do nothing” scenario, women would experience a disproportionate share of job losses from the pandemic, which would slightly reduce the female-to-male labour force participation rate (from 0.63 pre-COVID-19 to 0.61 in 2020). Without action to boost gender parity, reduced female participation would persist post-pandemic, leaving global GDP $1 trillion below where it would be if the coronavirus had affected both sexes equally.

“Take action now” maximizes the contribution women can make to the global economy, increasing the participation rate to 0.71. Under this best-case scenario, decisions by policy-makers would significantly improve gender equality by 2030, leading to a $13 trillion boost to global GDP in that year – an 11% increase over the do-nothing scenario.

Waiting until 2024 to take action would also benefit GDP in 2030, but by $5.4 trillion less than taking action now, the report predicts. 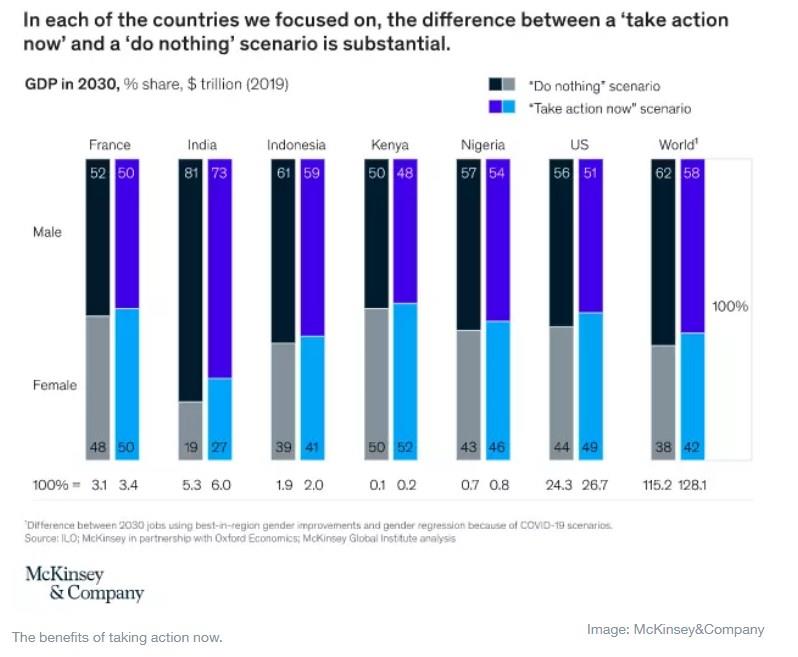 In each country studied, models showed that taking effective action to reduce gender disparities in job losses caused by COVID-19 would lead to greater overall economic output by 2030.

Recovery efforts that invest in the female workforce, tailored to each country’s needs, could significantly boost employment opportunities and drive inclusive economic growth, the report predicts.

This could include removing gender imbalances in recognizing and taking on unpaid work and child care, and putting policies in place to distribute these responsibilities more evenly between men and women. Barriers to women’s digital and financial inclusion and entrenched attitudes about women’s role in society are also areas to address.