2020 was a breakthrough year for electric vehicles

After years of hopeful signs, 2020 may well have been the year we reached a tipping point in the adoption of electric vehicles, according to new research

In Europe, 2020 saw electric power surge ahead. Norway led the way with zero-emission vehicles accounting for over half of new cars registered in the year to the end of November 2020.

After years of hopeful signs, 2020 may well have been the year we reached a tipping point in the adoption of electric vehicles, according to new research.

The number of electric cars, buses and even trucks on the world’s roads hit a new high last year and analysts at JP Morgan believe we just passed the point of no return on the global journey to zero-emission motoring. 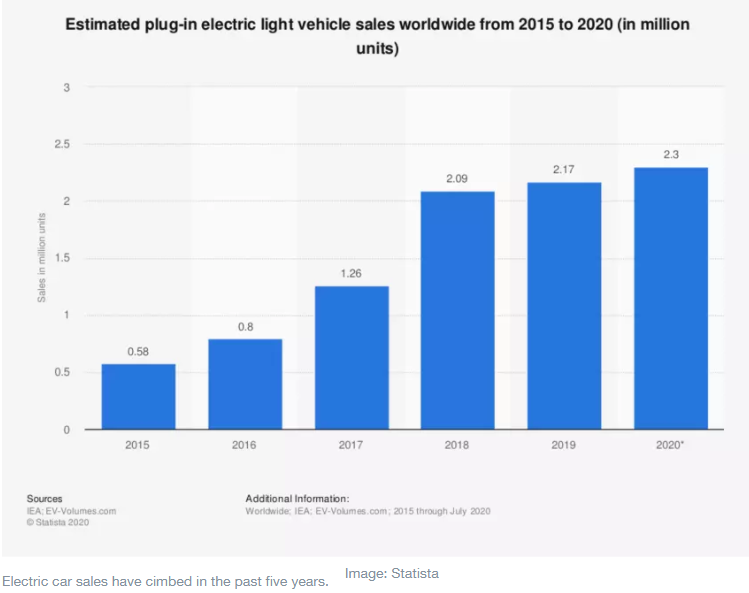 Globally, electric car sales reached 2.3 million in 2020, an almost four-fold increase in just five years. China continues to lead the world in the adoption of electric vehicles (EVs) – nearly 1.2 million were sold there in 2019 and there were 3.35 million EVs on China’s roads by year’s end.

In Europe, 2020 saw electric power surge ahead. Norway led the way with zero-emission vehicles accounting for over half of new cars registered in the year to the end of November 2020.

To be fair, Norway had a head start. Over a quarter of a million of Norway’s 2.8 million registered cars were already electric at the start of 2020.

Electric cars of all types accounted for 6% of the cars on Europe’s road in 2020, according to JP Morgan, up from just 1.6% the year before and making up 27% of all new sales in France, Germany, Italy, Spain and the UK.

Analysts attribute part of the rise in EVs to subsidies introduced in some countries to stimulate demand during the COVID-19 crisis, such as the $8,550 (€7,000) discount on offer to electric car buyers in France. In Norway, EV drivers enjoy a 90% discount on road tax.

Even the Hummer goes electric

In the US, only 4% of cars were electric in 2020. The market share of electric vehicles has risen at a steady one percentage point a year since 2017 when it stood at 1%. But times are changing. General Motors recently announced a range of new EVs, including two electric Hummers.

Tesla is working on its Cybertruck pick-up as its entry into the commercial vehicle market.

JP Morgan expects electric vehicle sales to grow by up to 30% as China’s economy recovers from the effects of the pandemic. Cheaper batteries and longer-range vehicles, rather than government subsidies, are driving the growth, analysts say.

Across the world, car manufacturers are introducing new electric models in 2021 with improved range and performance.

Volkswagen is in the process of delivering the ID.3, its first purpose-built electric car across Europe.

Volvo began production of its first fully electric car, the XC40 Recharge, in October 2020 and says half its global sales will be fully electric by 2025.

In December 2020, Volvo made its first delivery of electric trucks and construction vehicles. The company expects over a third of its commercial vehicle sales to be electric by 2030.

Key to the sales success of EVs is the price and performance of their batteries and both are improving. The average price of a vehicle battery pack fell from $1,160 in 2010 to $156 in 2019 and VW recently set a range record of 531km on an ID.3 test drive.

The World Economic Forum has convened the Global Battery Alliance, bringing together 42 global organizations including manufacturers and raw material producers. They say batteries have a key role to play in reducing the carbon footprint of the transport and power sectors.

But EV infrastructure also needs to be in place if these technological advances are going to be effective. By 2040, around 290 million charging points need to be deployed, requiring about $500 billion in investment globally.

EU prophets of doom were wrong

Following the 2016 referendum in the UK there were predictions by EU prophets of doom, like chief-negotiator Barnier, that banks, hedge funds and other financial firms would leave London’s City en-mass

In a hearing today, MEPs demanded clarity on vaccine deliveries and insisted that pharmaceutical companies honour their contracts

The often-unsaid truth of European business is that it is shockingly concentrated in a relatively small number of families. Part of that is by design