Can we put a price on clean air? Yes, we can

According to the World Health Organization (WHO), an estimated 4.2 million premature deaths globally are linked to ambient air pollution. Studies have estimated that poor air quality contributes towards 19% of all cardiovascular deaths and 29% of all lung cancer deaths.

by Jane Burston and Rain Newton-Smith*

One of the features of recent months to which we’ve all grown accustomed is daily news stories about the impact of COVID-19 lockdowns on air quality in cities around the world.

We’ve seen photos of cities where the smog has lifted, heard anecdotes of people appreciating cleaner air under lockdown – and seen a flurry of news stories about air pollution levels rising again as people get back to work.

While no-one would have wished for such huge changes to the way we live and work, they have undoubtedly raised awareness of the impact of air pollution. A recent YouGov survey commissioned by the Clean Air Fund showed that air pollution is now considered one of the top-three public health concerns in all the countries surveyed (Bulgaria, India, Nigeria, Poland and the UK).

This level of concern is entirely appropriate. According to the World Health Organization (WHO), an estimated 4.2 million premature deaths globally are linked to ambient air pollution. Studies have estimated that poor air quality contributes towards 19% of all cardiovascular deaths and 29% of all lung cancer deaths. These health impacts increase costs to public health services but also have a substantial economic cost. The World Bank estimates that air pollution alone cost the global economy $225 billion in lost labour income in 2013.

And that was before COVID-19. One of the many tragic aspects of the pandemic is that the communities most vulnerable to air pollution are also those most impacted by COVID-19 – meaning those least equipped to cope with it are those most affected.

There are, however, reasons to be hopeful. Because as we witnessed during the lockdowns, air pollution can be fixed almost overnight, and the anticipated improvements to human health of doing so are well evidenced. So perhaps a more useful narrative at this time is one that focuses on the benefits that could be realised through achieving cleaner air.

While the health benefits of clean air have been well researched and documented, less attention has been paid to its economic benefits. That’s how our two organizations came together: the Clean Air Fund commissioned CBI Economics to conduct a first-of-its-kind analysis of the economic potential that could be realised by achieving clean air in the UK.

The results of the CBI Economics analysis show that, in the UK alone, the economy could benefit to the tune of £1.6 billion ($2.2 billion) boost each year if it were to achieve the guidelines set by the WHO for ‘safe’ air quality, and this is on top of potential savings for the NHS and social care of treating health conditions.

The analysis finds that reducing mortality and morbidity from diseases linked to poor air quality would lead to fewer deaths, fewer work absences and fewer days an individual attends work ill. Not only does this benefit the individuals and their friends, families and communities, but a healthier nation brings important economic benefits from retaining and using the skills and experience of those people.

The knock-on benefits of these improvements in human health are considerable.

By reducing mortality and diseases linked to poor air quality, almost 17,000 premature deaths in the working population could be prevented each year.

With these individuals living and working longer, the UK could gain almost 40,000 productive years, which is estimated to provide a £1 billion ($1.35 billion) economic gain in the first year and an even larger benefit in future years, as fewer people are forced to retire early due to ill health. 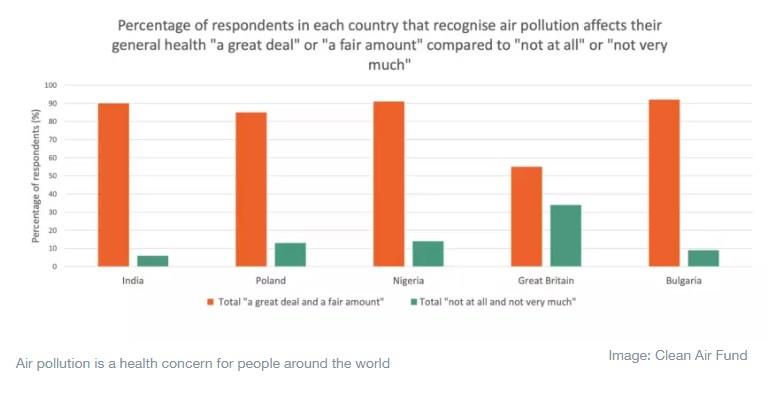 An improvement in air quality will also provide an additional 3 million working days each year by reducing in the number of sick days people take, time they have to take the day off to look after sick children, as well as a the days workers go to work ill and don’t perform at their best. That would deliver an estimated boost of close to £600 million ($808 million) to the UK economy as a result.

This not only benefits the UK economy but individual workers, too. Together, fewer premature deaths and illnesses associated with poor air quality could increase UK earnings by £900 million ($1.2 billion) each year.

In 2018, the UK missed several of its national air quality objectives, which already fall behind the guidelines recommended by the WHO for ‘safe’ air in eight out of nine areas.

The findings in the CBI Economics report give further weight to calls from campaigners urging the UK government to commit to meeting WHO air quality guidelines by 2030.

The relevance of these findings reaches far beyond the shores of the UK. They should act as a wake-up call to local and national governments around the world to ensure clean air is considered a fundamental necessity as they regrow their economies in ways that support the health and well-being of all their citizens as well as the environment.

There’s a clear message for business here as well: action on air pollution benefits the bottom line as well as employee health. It is apparent from the analysis that air pollution is hitting the balance sheets of businesses across the country. That is why businesses across all sectors support a sustainable and green future, and why many companies are already committed to doing what they can to help the UK reach its net zero-emissions target by 2050.

With such a striking economic rationale for reducing air pollution, it is evident that meeting WHO air quality guidelines is a crucial element of the green recovery.