Why CO2 removal is not equal and opposite to reducing emissions

In recent years, countries, companies and institutions around the world have set “net-zero” emissions targets as part of efforts to tackle climate change

"Emissions of CO2 and other greenhouse gases can be challenging and very costly to remove."

In recent years, countries, companies and institutions around the world have set “net-zero” emissions targets as part of efforts to tackle climate change.

The requirement to reach zero carbon dioxide (CO2) emissions to stop the rise in global average temperatures arises from the long time that CO2 stays in the atmosphere and the slow reaction time of the ocean.

But how about the “net” aspect? The logic is that residual emissions of CO2 – and other greenhouse gases that are challenging or very costly to eliminate – can be balanced by removing CO2 directly from the atmosphere and storing it for the long term.

An assumption that is commonly made when balancing a CO2 emission with a CO2 removal is that “one tonne in equals one tonne out” – that is, that the behaviour of the climate system in response to emissions and removals is “symmetrical”.

We chose to test our hypothesis using a global climate model of intermediate complexity, with simplified representation of some climate system components and run at a coarser spatial resolution than models of full complexity.

The advantage of this class of models is that they are quicker to run and, therefore, allow us to run more and longer simulations. The added advantage in this case is that the model does not represent atmospheric variability due to phenomena such as El Nino and La Nina. This makes it easier to detect a “signal” in how the Earth responds to changing CO2.

We forced the model with an instantaneous “pulse” of CO2 emissions and removals ranging from 100bn to 500bn tonnes (gigatonnes or GtC) of carbon, equivalent to around 10 to 50 times current global annual CO2 emissions.

Application of instantaneous emissions and removals is an “idealised” way to run the experiment, but it is standard practice in climate science as the climate and carbon cycle response has been shown to be independent of the rate of emission or removal. We use 100GtC as the smallest pulse size because it is the minimum forcing that can be applied for a temperature signal to be detectable. This is even the case for a model like the one used in this study that excludes atmospheric variability as there is still variability in the coupled ocean-sea ice-atmosphere system.

Based on these model simulations, we discovered that the change in the concentration of CO2 in the atmosphere is asymmetrical.

You can see this in the chart below, which shows an example of the simulated change in atmospheric CO2 concentrations following the emission (solid grey line) or removal (dashed grey line) of 200GtC. The blue line represents the difference between the two, which is slightly positive – indicating that the rise in the atmospheric CO2 concentration following an emission is larger than the decline following a removal of the same magnitude. 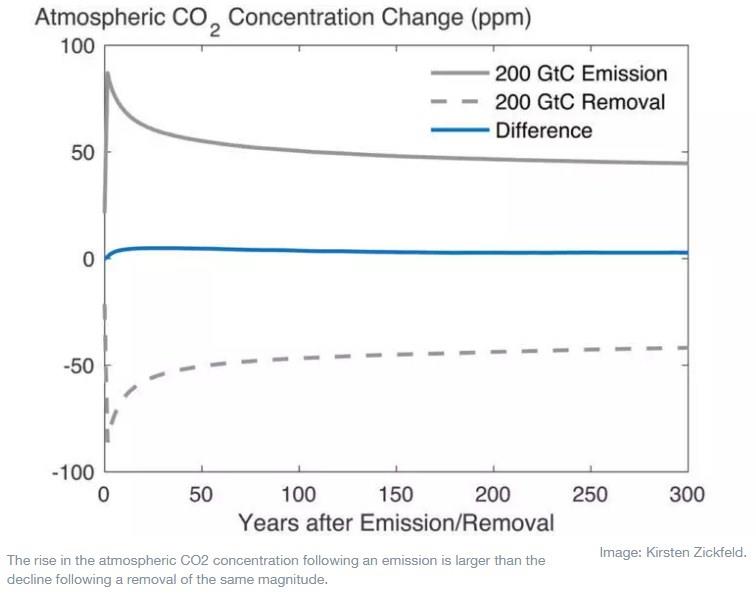 The asymmetry in the atmospheric CO2 concentration results from differences in the way the land and ocean carbon sinks respond to emissions and removals. Several key processes that determine the reaction of these sinks are not linear.

How about surface temperature? It turns out that the reaction of temperature to emissions and removals has less of this asymmetry. For example, there is a 2% imbalance in temperatures 100 years after a 200GtC emission or removal, compared to 7% for atmospheric CO2.

The reason is that nonlinearities in the carbon cycle are compensated by another nonlinear process – that is, the effect of changes in atmospheric CO2 on Earth’s radiation balance, which diminishes at higher atmospheric CO2 levels. As a result, an increase in atmospheric CO2 has a smaller radiative effect than a CO2 decrease of the same magnitude. 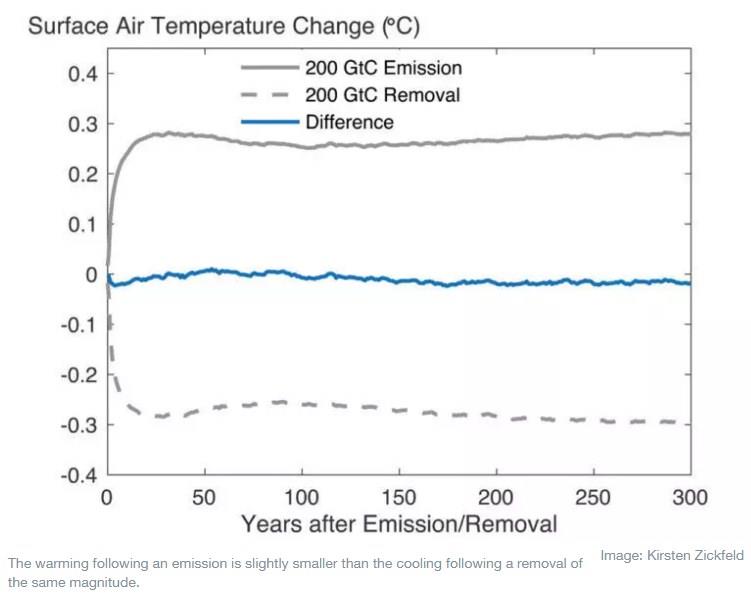 There are reasons, however, to assume that the sign of the temperature asymmetry will depend on the climate model used to run the simulations. The temperature response to a CO2 emission and removal is determined by the radiative effect of CO2 mentioned above, but also the uptake of heat by the ocean and climate feedbacks. The extent to which the combination of these processes compensates the nonlinearity in the carbon cycle response likely varies from model to model.

In the real world

So, does the asymmetry found in this study have implications for how CO2 emissions and removals are balanced in real-world settings?

As a result of applying emissions and removals separately, the atmospheric CO2 concentration diverges more strongly in our model simulations than it would in the real world, amplifying the asymmetry.

However, carbon cycle and climate responses differ widely between models, and preliminary analysis of simulations with a set of complex Earth system models indicates that the magnitude of the carbon cycle and temperature asymmetry could be substantially larger than found in this study.

In conclusion, the findings of this study suggest that balancing a CO2 emission with a CO2 removal could lead to a different climate outcome than avoiding the CO2 emission, but the magnitude of this effect remains uncertain and calls for further quantification.