What is NATO and what happened at the NATO summit?

Once ratification in allied parliaments is done - which could take a year - the Nordic countries will be covered by NATO’s Article 5 collective defence clause, which puts them under the United States’ protective nuclear umbrella.

In the end, it took a well-timed coffee break to smooth the way for Finland and Sweden to join NATO.

Since May 2022, when Turkiye had held up the Nordic countries’ plans, there had been weeks of talks in the run-up to the June summit in Madrid.

But the day before the summit was due to commence on June 28, there was a last-minute - and unexpected - breakthrough after two hours of intense discussion.

“We had a coffee break and as always, during the coffee break, great ideas come up and then in the end, towards the end of the meeting, it was easier to come to the conclusion," Finland’s Foreign Minister Pekka Haavisto told Reuters in an interview.

How NATO is expanding and changing

Sweden and Finland, which has a 1,300km border with Russia, dropped their traditional stance of neutrality and applied to join NATO after the Russian invasion of Ukraine (which is not currently a NATO member).

The Declaration from the 30 members of NATO, published on 30 June, formally invites the two countries to join, while also naming the Russian Federation as “the most significant and direct threat to Allies’ security and to peace and stability in the Euro-Atlantic area” - and reiterating “unwavering support” for Ukraine.

Once ratification in allied parliaments is done - which could take a year - the Nordic countries will be covered by NATO’s Article 5 collective defence clause, which puts them under the United States’ protective nuclear umbrella. 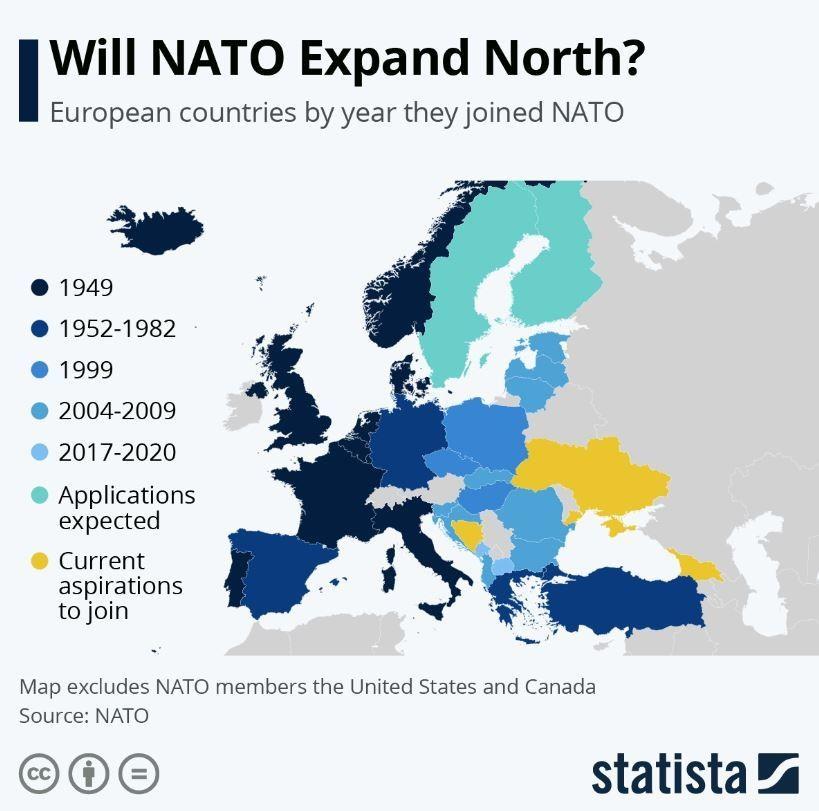 Ahead of the summit on 27 June, NATO Secretary-General Jens Stoltenberg said the number of troops on high alert would be boosted to more than 300,000 - a sevenfold increase - to deal with the threat Russia poses to European security.

Stoltenberg said NATO had to respond to the new reality after trying to establish a dialogue with Russia “for many years”.

On the alliance’s eastern flank nearest Russia, NATO troops will be increased to brigade level, with thousands of pre-assigned troops on standby in countries further west like Germany as rapid reinforcements.

"Together, this constitutes the biggest overhaul of our collective deterrence and defence since the Cold War," Stoltenberg said.

“On one side of the fence or curtain, you have an isolated, quite aggressive, revisionist, authoritarian Russia. And on the other side of the curtain, you actually have 40 European states ranging from Georgia, Ukraine, Moldova, all the way to the British Isles,” the Director of the School of Transnational Governance said, noting not all of those states were in the EU or even in NATO.

“We need to find some kind of a way to cooperate among European states, because I think we’re in this for quite a long time, a minimum of 5 years, most probably 10, 15.”

What else happened at the NATO summit?

Ukraine’s President Volodymyr Zelenskky spoke at the summit via video link-up and appealed for $5 billion per month for its defence and protection.

"This is not a war being waged by Russia against only Ukraine. This is a war for the right to dictate conditions in Europe - for what the future world order will be like," he said.

Climate change was also high on the agenda: for the first time, it was recognized as a “defining challenge of our time”.

Stoltenberg announced members would reduce gas emissions by at least 45% by 2030, down to net zero by 2050, at the first High-Level Dialogue on Climate Change and Security.

There will also be a new methodology for measuring NATO’s greenhouse gas emissions, both civilian and military, will help guide gas reduction efforts.

“This is vital, because only what gets measured, can get cut,” said Stoltenberg.

Energy security, food security and cybersecurity were also all mentioned in the Declaration.

What is the history of NATO and how does it work?

NATO’s history is tied to Russian expansionism. It was created in 1949, in response to then Premier of the USSR Joseph Stalin’s attempts to bring other states under communist rule.

The US, Canada, the UK, Belgium, Denmark, France, Iceland, Italy, Luxemburg, the Netherlands, Norway and Portugal signed a treaty stating that “an armed attack against one or more… shall be considered an attack against them all”.

It has since gone through eight rounds of enlargement: By the fall of the Berlin wall in 1989, there were 16 countries and in the 1990s, after the collapse of the USSR, former Soviet countries began joining, taking the total up to 30.

The June Declaration reaffirmed NATO’s open-door policy, which allows any European country to apply to join, but they must commit to defence spending of 2% of GDP.

In March 2020, the Republic of North Macedonia became the latest country to join, while Ukraine, Georgia, Bosnia and Herzegovina are in the application process.

Prof Stubb believes NATO to be “the most successful political and defence alliance in the history of nation states” because its very existence enabled it to win the Cold War “without firing a shot”.

“The basic foundation is Article 5 collective defence, which means that if you are attacked, the rest of you, the rest of the members will come and help out… just its mere existence is a repellent for security.

“One of the problems with NATO was that it lost a little bit of sense of purpose after the Cold War ended. But I think after [the invasion of] Ukraine, now it’s back with its original mission from 1949.”